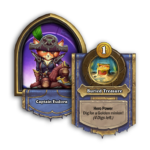 Blizzard’s 17.4 update for Hearthstone is coming tomorrow, bringing with it a major shakeup to the Battlegrounds meta.

Four new heroes and an entirely new set of 17 minions, which includes the Pirates minion type, will set sail with the patch on June 9. The strategy of the new Pirate class looks to be aggressive while also augmenting how your economy works with gold. This is achieved either by granting you more gold or by reducing the costs of different aspects of the Battleground.

Since Pirates entering the mode would add too many minion types to manage and find consistent synergies, Blizzard is adding Shifting Minion Pools to the mix. When you start a game of Battlegrounds, five out of the six available minion types will be what you can expect to buy for that entire match. The active minion types will also be displayed when you’re selecting a hero so you can form strategies quickly without doing much guesswork.

To keep the game interesting and fair, heroes that are designed with specific types in mind, like Ysera or Alexstrasza with Dragons, won’t be pickable in that game of Battlegrounds if the corresponding type isn’t chosen.

Two of the heroes that are in the pool will also be reworked. Patches the Pirate now has a new Hero Power that synergizes with the Pirate type and The Rat King will always start off with a random minion type when a game of Battlegrounds begins. In addition, Professor Putricide is being removed from the hero pool once again. Holy Mackerel is leaving the minion pool since the tier-six Murloc could be oppressive once players reach the late game.

Here are the newest heroes (and the reworked Patches):

From the Year of the Dragon storyline, Captain Eudora brings in an interesting and new mechanic. We don’t know the exact mechanics of Eudora’s Hero Power yet. For now, it can be guessed that players can discover a golden minion from tiers that they’re in or below and get that minion to hand without getting a minion from a higher tier.

Skycap’n Kragg’s Hero Power gives players two different strategies to try out. Players can try to go for a quick tempo turn early on to get a lead by using their Hero Power. Alternatively, a player can scheme and wait with the Hero Power, letting it gather more value over time for a big turn late in the game.

Captain Hooktusk will synergize well with token units, similar to Malygos. If you’re ending a turn with a weak Battlecry unit, you have a chance to high-roll a better unit or a potential triple.

Patches the Pirate returns to the game from a reworked mini-Ragnaros Hero Power to a new way to accrue pirates. While it’s unclear how you get a Pirate, it’ll probably be random from a tier you’re in or one below.

This article will be updated when the exact mechanics are understood.

While this Hero Power may look weak at first since it takes seven rerolls of doing nothing to get it rolling, it provides an unseen value in the late game by improving the odds and rate at which you find more minions. You need to be Tavern level six to choose from six minions each time you roll, but Aranna can get that value and even more at any Tavern level if she’s rolled enough. This Hero Power will be tough to use properly, though, since it can also punish players if they aren’t lucky enough to survive a weaker early game.

This strategy can excel if there’s a minion Beast pool because players can do a hyper-rolling strategy sitting at level one to amass large Rabid Saurolisks by cycling Deathrattles in and out of their pool. Having seven minions to choose from at Tavern level one can almost guarantee you the pools you want.

Here are all of the new minions joining the pool:

[Tier One, Pirate] One Attack, One Health – Deathrattle: Summon a 1/1 Pirate. It attacks immediately.

Taunt After this minion survives being attacked, attack immediately.

[Tier Four, Pirate] Five Attack, Four Health – Battlecry: Give a friendly Pirate +1/+1 for each Pirate you bought this turn.

[Tier Four, Pirate] Two Attack, Two Health – At the end of your turn, gain +2/+2 for each friendly Golden minion.

Hearthstone Patch 17.4 will be available tomorrow on PC and Mobile. Players without Battleground Perks can try these heroes out on June 23.