I might be copy-pasting this intro in the next parts of this article because of the number of cards i’ll be doing.

Alright so Blizzard kind of trolled me here.

I thought we were going to have yet another 5-6 cards announcement today, but instead we got a huge woopy 24 cards revealed today.

The craziest thing though, is how much there is to discuss about each cards, which should still leave us with tons of stuff to talk about each card regardless of how big the streak of cards shown to us was.

After some thinking I decided to continue with my strategy of review, but this time instead of 4 cards per article, i’ll be doing a huge review with 8-9 cards per part.

So, without any more delays, let’s start this thing!

And here is a card I very much enjoyed. This card gives me the feeling that Freeze Mage could be getting some extra cards to play with, possibly even turning the whole Freeze Mage strategy into something similar to a Midrange Mage of some sort.

This obviously happens because of

ice-block and how good this card interacts with it. This is also a 2-mana 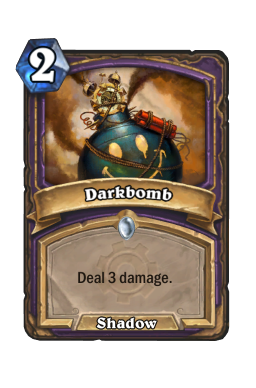 darkbomb-on-a-stick card. The value that you can get out of this card whenever there is a secret out is immense, and different from the 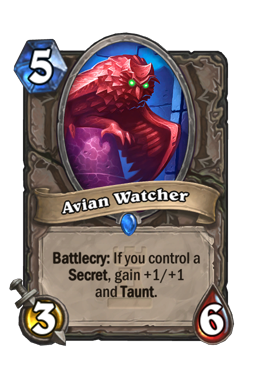 avian-watcher you can easily get away with not playing this on curve, as the value strongly outweighs the cost.

This card also only costs 2 mana, which is another reason that leads me to believe on its power.

Some interesting thing about this card, though, is that it can/should ultimately make a whole new mage archetype exist on its own, and that is what I like the most about this card.

So Miracle Rogue got something after all! Not what the deck was needing, but sure some new toys to play with are always nice.

This is an obvious Yogg-Card, since it works so good with decks that want to play tons of spells per turn. The decks that makes me believe will benefit from running a 1-of of this card are obvious: Token Druid and Miracle Rogue. However, excluding already existing Yogg strategies, I can’t quite think of possible strategies that could benefit from this guy, maybe Yogg Hunter?

Well, all in all this is a dude that will only complement decks built around

yogg-saron-hopes-end, I also strongly believe this won’t see play as a 2-of, as it may cause some strange “ops, I lost the game” kind of hands.

I have to say such a strategy could be possible at this point, given how bad Hunter’s early game is. However, since the already existing Midrange Hunter is getting such a huge upgrade with

kindly-grandmother, I wouldn’t count this card as an obvious-core card as of right now.

This card will sure give Hunters a lot to think about in the next month or even longer than that, but if there is something that I am sure of it is that it’ll see play – People will try and work thousands of different Hunter strategies because of this card, and that makes me happy.

Oh, and just for the record: If I was to guess, I’d say that the

kindly-grandmother version of Hunter is going to be better than the Secrets one.

Much like bear trap, this card gives people a false impression that they’re playing a 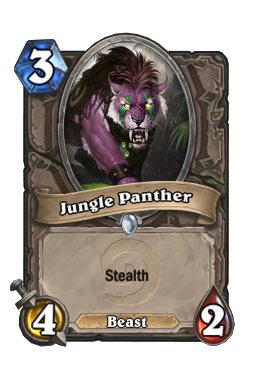 jungle-panther for only two mana, when in the end the opponent can simply take some time to actually cast something, and you would just be losing Tempo when playing this card.

I didn’t get much impressed with this card, I have to admit it seems even worse than

bear-trap, however the sole existence of this card means people will have to play around even more stuff when they see a Hunter trap in play, and that is indeed good for the Hunter class as a whole.

This card competes with two other cards for the spot of “Nuba’s favorite card in the expanson”. I just loved this card, because it makes already existing (yet, not good enough to be played) archetypes more viable. This card gives Dragon Paladins exactly what it was looking for, I just can’t tell right now if it’ll be enough for the deck to be played, but it will for sure make those old Dragon Paladin cards that didn’t see play before stronger.

I don’t think there needs to be a real explanation why I think this card is so good, playing two 1/1s together with a 2/3 for only 3 mana seems like cheating.

Cards like these gives people false impression that they’re cheating the value table, playing “a 2/6” for only 3 mana seems good enough doesn’t it? Fact is: when those value points are spread in a way that people can easily trade into these cards without losing anything makes the card seems like a terrible one.

The 1/3s won’t do much turn 3, at least not as much as they would do let’s say turn 2, and this card doesn’t seem to scale that greatly in the late game too.

The most situational of all portals right now. Whenever I think of “random 2-drop” I usually picture a 3/2 on my head or something very similar, which leads me to seeing this card as a

shattered-sun-cleric that gives an extra +1/+1 for an additional mana.

Before giving my verdict, I would like to remember that I am not an Arena type of guy and that these reviews have absolutely nothing to do with Arena.

Alright, now back to the card, this is a fairly weak card that can end up seeing some play as a 1-of in some Aggro Paladin deck as a support card but chances are the Paladin player will always prefer

blessing-of-kings instead of this card as the Tempo effect is a lot better in the Kings, meanwhile

keeper-of-uldaman is just hands down better than this card and also a tool to get rid of huge taunts.

This looks so much like an Arena card that it feels super weird to analyze this card in a Constructed point of view.

If you are playing this card (let’s pretend you are, I mean there are so many better 5-drops than this!) you’ll want to run this in a deck that has multiple buff targets, probably a Beast Druid (yeah, go ahead and cut those

azure-drakes for this yo) with some murlocs and…. Ok, this card is just too weird.

There obviously isn’t any deck for this right now, and I believe that it is just too much of an effort to build a deck around a card such as this one. Sure, it could work, but I think it’ll be so inconsistent that eventually people will just drop it anyway (even if it actually gets played some day).

Priest of the Feast

This is such a good card, exactly what Priests needed to stop being an inconsistent class played around with so many situational cards that usually do nothing and whenever they do something other classes will have cards doing it better. This card actually fixes all Priest’s problems and I believe that now we’ll finally be able to see Priests in the top tiers of the competitive scene! Finally!

Irony aside, this is sad. This card doesn’t fix any of Priest problems, it doesn’t even tries to make the class playable! And the expansion as a whole might throw the class even further into oblivion.

And here we finish the second part of today’s card review.

Don’t forget that the opinions posted here are first impressions on the cards we see, so in the end we might be missing something here and there, but I am quite confident on my reviews as of right now.

I hope you guys enjoyed this analysis, and soon we’ll be back with even more card review for you guys to read!

Love you all, see you soon!