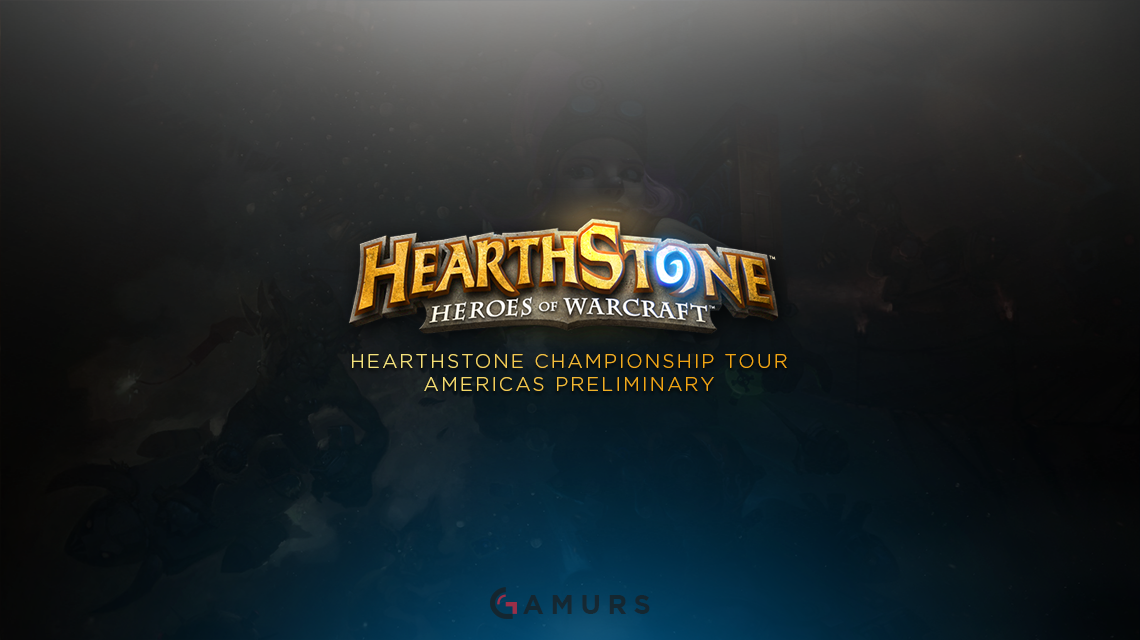 The Hearthstone ChampionshipTour Preliminaries for the Americas took place this weekend as thecompetitive scene seeks the top eight players of the region to sendto the main event on June 25 and 26. The players were split intofour brackets, each with a winner and losers side; the winners ofthe winner and losers side from each bracket obtained a ticket tothe main stage. Several notable players were in attendance,including Dignitas Chakki, coming off of his recent win atDreamHack Austin and Archon Amnesiac, the winner of the WinterChampionship. The tournament was played in a best-of-five conquestformat where once a player has won on a deck, it cannot be usedanymore for that set. With a prize pool of $20,000 and a chance tocompete at one of this year’s biggest tournaments, the AmericasSpring Preliminaries were sure to be filled with great players allin top form.

While Bracket #1 did not havethe star power of other groups, there were still well known namesin the running and a lot of amazing Hearthstone. The upper bracketsaw an amazing five game final between Canada’s Cydonia andJoster from the United States. After going up 2-0 in the set,Joster struggled to find his final win on his Freeze Mage deck,opening the door for Cydonia to attempt a comeback. Cydonia’sfirst win came on an Aggro Shaman deck, which left Joster with toofew answers towards the end of the game. The second game putCydonia on his Miracle Rogue deck, which is usually considered tohave an unfavorable matchup against Freeze Mage.

Regardless, Cydonia amassed amassive board by turn eight, putting Joster in an awkward spotwhere he was not able to completely wipe the board. This allowed Cydonia to push for hissecond win, forcing the match to a deciding game five. This gamesaw the battle of the control decks where Cydonia was put on RenoWarlock in response to the still winless Freeze Mage from Joster.The game seemed even for a while until Reno Jackson was dropped by Cydonia, resetting his lifetotal and putting him outside of Joster’s damage range,ending the game and Cydonia’s comeback with an impressive 3-2victory. Joster however, did not experience the feeling of losingfor very long as he was bumped to the finals of losers Bracket #4where he won a 3-1 set against Saturos, leaving Joster and Cydoniaas the representatives from Bracket #1.

Bracket #2 saw a couple familiarfaces in Cloud 9’s TidesofTime and Archon’s Zalae.Their time in the upper bracket, however, would be short lived,both losing before the third round of the upper bracket took place.In the second round, Zalae fell to Napoleon in a close five gameset. Napoleon then continued to head through the bracket,eventually finding himself in the finals of winners side. Hisopponent, Deerjason, also bested a well known name inCanada’s Fibonacci.

The final was yet another fullfive game set where Napoleon saw himself quickly jump to a 2-0lead, finding wins on Midrange Hunter as well as a Miracle Roguedeck. His final deck, seeing a rather uncharacteristic slump, was aMidrange Shaman deck which had performed well for other playersthroughout the tournament, even drawing bans in most matchups. Thefirst win for Deerjason came when his Zoo Warlock deck simplyoverpowered the Shaman, ending the game on turn five. The next deckfrom Deerjason was what many consider to be the best deck in themetagame right now in Tempo Warrior. The game was very close untilNapoleon dropped Doomhammer. Unbeknownst to him, Deerjason had the perfectanswer to this play in hand with Harrison Jones. This allowed Deerjason to draw six cards,including several of his threats in Ragnaros the Firelord and Grommash Hellscream. Shortly after, Napoleon conceded the game,sending the set to a pivotal game five. Napoleon needed one morewin with his Midrange Shaman deck against Deerjasons Freeze Mage.The game began and very quickly it was sure to be a great one.Towards the end of the game, Deerjason dropped an Alexstrasza, putting Napoleon at 15 health. Then,Napoleon’s turn started and with his amazing positioning andsequencing of card effects, he found a way to clear Alexstrasza offthe board as well as push enough damage to Deerjason to put him inan awful spot. This then allowed Napoleon to finally find a win onhis Midrange Shaman, and obtain a ticket to the main event on theback of an amazing play. Deerjason was then sent to lower Bracket#3 where he had yet another close five game set with APXVoiD,leaving Deerjason the winner and also going to the mainevent.

Bracket #3 saw the return to theHCT tour by the Winter Championship winner Archon’s Amnesiac.Amnesiac’s run, however, was stopped short by a Canadianplayer by the name of Duane. Duane was running through the bracketand after defeating Amnesiac, he would face an American playernamed Rosty in the upper bracket finals. Duane went through thebracket with an interesting choice in decks. He broughtN’Zoth Paladin to the event, a slow control style deckfocusing around an end game play with N’Zoth theCorruptor. This stood incontrast to the rest of the tournament where most players werebringing extremely fast Shaman and Hunter decks. This did not slowhim down as he took game one against Rosty’s Freeze Magedeck, a staple at the event. His happiness would be short lived asRosty pulled out an interesting version of Tempo Warrior in gametwo including some dragon synergy to help with the mid to lategame. The constant board threats from Rosty proved too much forDuane’s Aggro Shaman list, eventually overpowering throughthe board and pushing the series to a 1-1 tie. Now that the serieswas tied, it only seemed fitting that the next match would be anAggro Shaman deck against another Aggro Shaman deck. Game three sawRosty getting off to a very fast start and eventually push throughDuane’s defenses to end game three, putting him up 2-1. WithRosty on match point, the set drew down to a game four withDuane’s Aggro Shaman facing off against Rosty’s FreezeMage deck. Here it seemed that Rosty had an answer to everything,leaving Duane without any cards in hand and playing whatever he gotoff the top of his deck. This extremely awkward spot allowed Rostyto simply stall the game for as long as he wanted, eventuallyculminating in Duane’s run ending and Rosty heading to themain event. In what seemed to be a recurring theme, Duane droppedto the finals of losers side to play against a well known communitymember in Nostam. In a close five game set, Duane got the victoryhe wanted, sending him to the main event withRosty.

The final bracket of thetournament had community favorites and powerhouse players alike,such as Team Liquid’s Dog, Splyce Gaming’s Th3RaT, PAXEast Champion Duhcodda and DreamHack Austin ChampionDignitas’ Chakki. Despite the skill of these players, nonemade it out of round two, seeing new blood rise to challenge theold guard. The upper bracket finals pitted a well known name in PNCagainst Gallon213. With both of the players’ Shaman decksbanned away, game one fell to PNC’s Midrange Hunter againstGallon213’s Miracle Rogue. Despite PNC’s large amountof board presence, the Miracle Rogue pulled out a win in game onewith simply too much damage from Gallon213’s hand. Game twosaw PNC sticking to his Midrange Hunter while Gallon213 was put onhis Reno Warlock deck. This game saw PNC pushing theWarlock’s health down very quickly and Gallon213 simply didnot draw Reno Jackson in time to reset his health total and pushhimself out of PNC’s damage range. This left the series tiedat 1-1 going into game three.

This game was a mirror match oftwo Warrior decks, both vying for a lead in the series. PNC broughtTempo Warrior to the stage, centered around putting several threatson the board at once and overpowering your opponent. In contrast,Gallon213 brought a Control Warrior deck, which centered aroundstalling the game until he could finish his opponent with a combofeaturing Raging Worgen, Inner Rage, and Faceless Manipulator. Eventually the constant threats provedtoo much for Gallon213 to deal with and PNC advanced to a 2-1 lead.Game four had PNC playing his Miracle Rogue deck and Gallon213sticking with his Control Warrior deck. This match saw Gallon213play two early Armorsmith’s,which allowed him to amassarmor and keep him outside of PNC’s damage, eventuallyculminating in Gallon213 taking the victory and pushing the set toa game five. The final game of the series saw PNC still seeking avictory on his Miracle Rogue deck and Gallon213 on his Reno Warlockdeck. In the end, the draw power behind PNC’s Miracle Rogueallowed him to amass a huge combo with Leeroy Jenkins and Edwin VanCleef to end the game, sending Argentina’s PNCto the main event. Gallon213 dropped to the losers bracket, pittinghim up against American player Bradforlee. In a five game set,Bradforlee defeated Gallon213 to advance to the main eventalongside PNC.

With eight players advancing tothe main event in June, the Americas are sure to be wellrepresented on the main stage. This tournament proved that new andunsponsored players have just as much of a shot to win as the oldfavorites, creating an ever changing dynamic and allowing the sceneto develop. The Americas had a heavier focus on Aggro and otherfast-paced decks at this tournament, which made for some veryaction-packed games and, in the end, a great event.

What did you think about the HCTAmericas Spring Preliminary? Let us know by commenting below ortweeting us @GAMURScom.