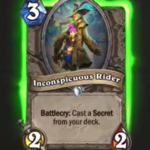 The final card reveal stream for Hearthstone’s Madness at the Darkmoon Faire expansion is now live. And one particular set of cards that were revealed builds upon the Secret Hunter archetype.

Mystery Winner is a weak turn one tempo play, but she fills out your curve and helps you get playable Secrets that you can use to respond to specific scenarios since you’re Discovering them.

Inconspicuous Rider is similar to Mad Scientist from Curse of Naxxramas. It’s a 2/2 minion that can play Secrets from your deck. While it does cost one more than Mad Scientist, which makes it a weaker version, it’ll still instantaneously provide the Secret due to its Battlecry.

Open the Cages is a powerful Secret that allows you to snowball an early board lead with a discounted Animal Companion. If you’re behind or even, though, Open the Cages won’t add anything to your board, which will make proper timing when playing it important.