Anytime you are playing a popular deck you are going to have to be ready for the mirror match. Mirror matches are important because they are going to be common and they teach you a lot about your own deck. You get to see your list from a different angle, which can help you figure out your own weaknesses and strengths. This guide will break down the mirror for C’thun Druid, a formidable force on the ladder that has a strong curve and one of the most consistent draws in the game.

Though you may think that C’thun Druid is a pretty stock list, there is a lot of variation outside of the C’thun cards. You can add in more lategame to fight control, more midrange threats to balance out your curve, or more removal and small threats to battle aggro. The way you play it is largely up to you, as each version is good or bad depending on what decks you face the most. To help you figure out which best fits your style, two lists and a guide have been linked below.

There are a couple of popular versions of Druid on the ladder, but you want to mulligan against all of them in the same way. That is, you just want to find minions and ramp to power out minions. Druids do not do well when their opponent can supply a constant string of threats and they are also bad against swarms. Their power largely comes during the midgame so you need to beat them before that or you will get outmatched. 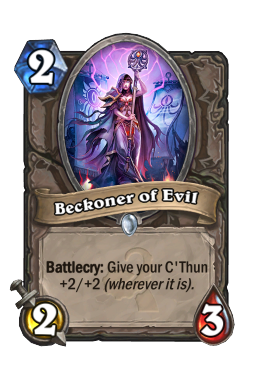 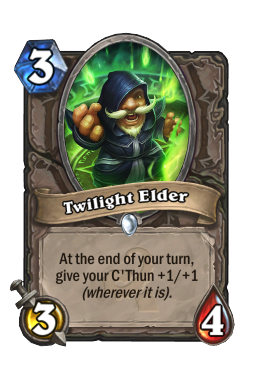 The whole goal of this game is to be ahead on board going into the late middle turns. Druids have strong minions, but they usually can only afford to play one a turn. As a result, if you or your opponent have multiple minions down going into the later game it is going to be a gigantic advantage. Use your removal and trades as best you can to make sure you always have something down.

Another important aspect is utilizing your removal while also being aware of your opponents. You and your opponent both have limited ways to remove minions, usually relying on trading on the board. As a result, you should always look to clear with your board and then save your harder removal cards for their threats. The only exception to this is when you need to use your spells to gain an early board.

While the early turns are usually going to be spent ramping or playing smaller minions, they are absolutely key for building into the middle game, which will then lead to the end. Every turn it is important to have something on the board, no matter how big or small. Yes, early spells are going to dictate how a lot of this goes, but the board is what makes the game.

The most important card during these turns is

Twilight Elder. The reason is that, not only is an early 3/4 hard to deal with as a Druid, but it also gives a buff that keeps building turn after turn. Playing this off of early ramp can just take over the board while also getting your C’thun close to ten power. Get yours out as soon as you can and always clear your opponents as quickly as possible.

Klaxxi Amber-Weaver. In terms of Klaxxi you should use any of your tools to make sure you get the buff. That means using early ramp or playing minions like Disciple of C’thun without getting any value from their ability. A 4/10 is almost impossible for Druid to clear and it will keep you in control for most of the early game.

Swipe. While you are not always going to be able to set this up, it is the best way to finish off your opponent’s minion while keeping your own on the board. Especially because almost all early minions in this game have more health than attack.

C’thun’s Chosen is a great turn four play that does a good job of challenging all of your opponent’s opening turns. Ramp into this as quickly as you can. Even if your opponent pops the shield it is going to cost them two mana or a minion.

The middle turns are the meat of the game. Though the end of the game is where the big, flashy minions come down, that is all going to be set up here. As noted above, you need to work hard to get something down onto an empty board. This will not be easy, but if you save your removal for the right targets

Do not be afraid to use

Druid of the Claw in charge form. Though you want to use the beast in its 4/6 form most of the time, having four charge damage can be a great way to clear or stack up pressure. Using this to clear a smaller minion is a good way to constrain your opponent’s mana, but it can also seal the deal when pushing for two or three turn lethal. 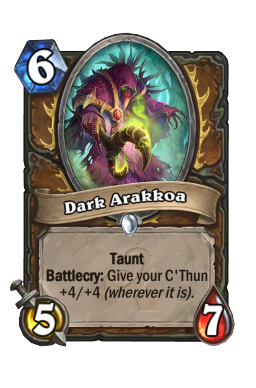 Dark Arakkoa is another card that you need to be ready for. The 5/7 can instantly lock down an entire board. If you are ahead you want to make sure that you have seven attack between your minions and removal just in case.

Sylvanas Windrunner. Though not a widely popular choice, the six mana game-hater does show up in quite a lot of lists and will be a blow out if you aren’t careful. If you do see Sylvanas you want to trade into her in a way where you can instantly deal with her ability. However, if you have no good trade or you are really far ahead you should not be afraid to go face.

The late game is going to be a medley of large minions smashing into each other. This is simply going to be a much bigger version of the middle game, except you and your opponent are both going to be your giant finisher. Damage is very important here and pressure is key. Look for ways to get in hits and don’t be afraid to force your opponent to make the trades.

The best card for both you and your opponent is Twin Emperor Vek’lor. Two 4/6’s will just lock down the game and grind the damage to a complete halt. As with

Dark Arakkoa, you always need to have a plan to clear 12 damage once turn seven rolls around. In the same vein, if you have the mana to play this card, you always should.

You need to set these turns up in a way where your C’thun is going to matter. The ten drop is very strong, but the minions are so big coming from both sides that a lot of the time it might do nothing. You want to strategically get it down onto a board with the least amount of junk possible.

Innervates. The zero mana spell is the card that breaks Druid as a class wide open, and it can really push C’thun decks forward. Always adding two mana to what your opponent can do really helps track their turns better and helps you