This is Part 3 of the Mastering the Control Priest deck guide series. It is split into 3 main guides:

This guide will cover the matchups and mulligans of Control Priest.

In this section, I will show you how to play against other popular decks – whether you’re a favorite, what to mulligan for and the general strategy of playing against it.

Cards you might keep: Light of the Naaru (if you have Injured Blademaster), Auchenai Soulpriest (if you already have Circle of Healing), Velen’s Chosen (if you have the Coin and a 1 drop, or two 1-2 mana minions without the Coin)

Midrange Druid and Aggro Druid is a good matchup for Priest. If you survive their early pressure and make it into the late game, while being out of their

Savage Roar– Combo range you are a favorite to win. Sadly the matchup can be very swingy for both players. If the Druid has a very fast start with

Innervate followed by a midgame or late game minion, the game gets very tough for Priest. On the other hand if the Priest gets a full health

Injured Blademaster very early and the Druid does not have a super fast start, it is almost impossible for the Druid player to win. Aggro Druid is a slightly better matchup than Midrange Druid, although your Injured Blademaster and Circle of Healing combination gets worse. A 4/7 is not that great when your opponent is ignoring the big minion and attacking your face with multiple smaller minions. But both

Auchenai Soulpriest give you very powerful board clears that are more potent against Aggro Druid. Aggro Druid plays smaller minions, lacks card draw and therefore can run out of steam more easily than its Midrange counterpart.

Every Hunter iteration is a good matchup. You need to stop/ slow down their initial pressure and then overwhelm them with your superior board presence. If you know it is Midrange Hunter, you can afford to keep Auchenai Soulpriest and Circle of Healing. Against faster hunter versions, the combo is way too slow, you need to stop the early bleeding as soon as possible and the Turn 4 board clear might even be too late, especially because you can’t heal yourself with the 3/1 Auchenai Soulpriest on the board. So in general I would not keep Auchenai Soulpriest because even with Circle of Healing it can be very bad against Face Hunter, unless you have early game minions and/ or the Face Hunter has a very bad start. But why would you then need the Turn 4  board clear anyways?

Cards you might keep: All the cheap spells if you already have a Pyromancer; Shrinkmeister if you have one mana minions; Velen’s Chosen (if you have the Coin and a 1 drop, or two 1-2 mana minions without the Coin)

Uther, the Paladin. Enemy number one and unbeatable monstrosity according to the majority of the Hearthstone Community.  Control Priest is very good against Secret Paladin, so I took a Screenshot of myself, whenever I see Uther’s face: you can find it here.

Cards you might keep: All the cheap spells if you already have a Pyromancer; Shrinkmeister if you have a one mana minion, Velen’s Chosen (if you have the Coin and a 1 drop, or two 1-2 mana minions without the Coin)

Tempo Mage is the only popular deck I have never played for the very same reason I don’t play Roulette in a Casino. I simply don’t enjoy the amount of random effects in the deck, even if I would get very good outcomes and crush my opponents, I don’t enjoy this gameplay experience. It just comes down to personal preference, therefore there are a lot of people who enjoy the deck (at least I hope so, because from a competitive point I don’t think it is even among the Top 15 decks in the game). In general the matchup evolves mainly around who can get board control first? If the Priest curves out and gets early board control, the Tempo Mage has almost zero chance to win. On the other hand if the Tempo Mage has the nuts, Priest Control is still in a good position if they have Lightbomb (can be sometimes too slow if they have a very fast start) or Auchenai Soulpriest with Circle of Healing. Mainly the matchup is just a horrible game play experience, the Priest player hopes to not get a bad draw and that Tempo Mage does not find the nuts in an

Unstable Portal. If nothing crazy happens, the Priest is a favorite to win. Some quick tips:

Cards you might keep: everything that make it easier to draw cards with Northshire Cleric; for example: Wild Pyromancer (with the coin), Circle of Healing and Injured Blademaster

This matchup is all about card advantage and slowly overwhelming the opponent. With the Grand Tournament and the addition of Justicar Trueheart it is not a good idea to try to win the fatigue war and try to not draw too many cards. The main strategy in this matchup is to draw a bunch of cards and play minion after minion (preferabbly while still drawing cards) to not give the Warrior any breathing room, until he runs out of answers and he then dies because of the pressure. But what is pressure in this matchup? A one drop followed by a two drop and three drop etc.? If you play like that you will very easily run out of steam and the Warrior can very easily deal with 2/3’s and 3/2’s etc. So ideally first of all you want to take it slow the first few turns, to then ensure some card draws out of Northshire Cleric. The steady stream of cards will give you the possibility to always play minions the Warrior cannot easily deal with like Injured Blademaster, 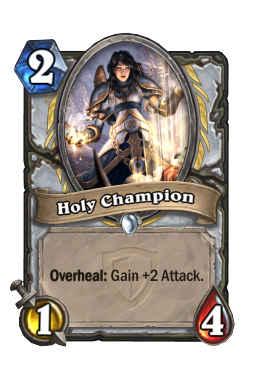 Holy Champion and Auchenai Soulpriest etc. So everything that does not die to

Fiery War Axe or the first charge of Death’s Bite is a good play that will pressure the Warrior. So if you draw enough cards early and in the midgame and the Warrior does not keep up with your card advantage, you will simply kill him before fatigue becomes a factor. To summarize the only aggressive thing you are doing is excessively drawing cards, you don’t want to commit too many cards to the board and lose a lot of cards to

Brawl. Just a steady stream of pressure is enough.

The matchup is really skill intensive. When I play Warrior Control versus Control Priest, I even don’t play a

Shieldmaiden on an empty board whenever I’m not in danger of burning any cards and something that unorthodox is the correct play if I don’t know the opponent’s decklist.

Cards you might keep: Circle of Healing (only with Injured Blademaster)

This is your hardest matchup, and if your opponent plays very well and draws decently you have almost zero chance to win. Your best way to win this matchup is to be aggressive and to curve out really well.

Cards you might keep: All the cheap spells if you already have a Pyromancer; Shrinkmeister if you have one mana minions; Velen’s Chosen (if you have the Coin and a 1 drop, or two 1-2 mana minions without the Coin)

Zoolock is a little bit similar to Secret Paladin, they play a lot of smaller minions that are weak to board clears. That’s where the similarities end. Zoolock not only plays more Deathrattle minions, that make the deck more resilient to board clears, it also has an inbuilt card advantage mechanism with Life Tap and plays high value minions like

Nerubian Egg. But make no mistake, the deck is still very vulnerable to board clears and Cabal Shadow Priest is at its best in this matchup. Just be aware that Zoolock can grind you out of resources, if you are not careful enough. Handlock on the other hand is like Control Warrior with more threats, a Ysera that is not vulnerable to any shenanigans:

Lord Jaraxxus, it also has an inbuilt card advantage mechanism to make sure that they can play big minion after big minion. So your best chance to win this matchup is if Wild Pyromancer and Northshire Cleric team up and draw an abundance of cards to keep up with Handlock’s value machine.

This is part 3 of this extensive deck guide series. Be sure to check out the other sections: