If you play Hearthstone for long enough you will arrive at the point that you cannot think about playing another game without feeling nauseated. Whilst the game can be insanely fun, it can also be absurdly frustrating if you overdose on it. For the three weeks prior to the 23rd of October, I forced myself to play this game even if I didn’t want to. Finally on the 23rd I went back to having fun with the game. In this short piece, all I wanted to recount is an experience of playing this game and having an awful time and my opinion on how to not make my same mistakes. Maybe reading my words will help some of you get over your own frustration with the game. If anybody is interested in the deck that lifted my mood up, it is the Token Druid deck on the right hand side.

Play to Win but for Fun

In order to fully understand the coming argument I need to make you aware of a couple of facts of me as a player. I am ultra-competitive, I want to be the best at any game I play. I cannot make myself play 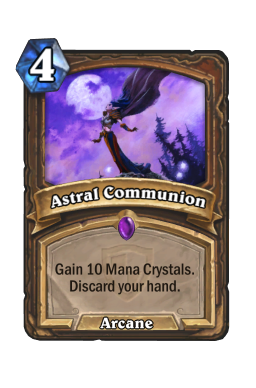 astral-communion Druid because even if one out of ten games I would win in a spectacular fashion, the other nine I would feel miserable because I got rushed down. Also, I hate Midrange Shaman as a deck, always have since I started playing this game (just before Naxxramas came out). Lightning Storm just tilts me too much. I really enjoy playing Fatigue Warrior, and my favourite deck of all time has to be Handlock. This though doesn’t mean I am a Control Player, I got a lot of mileage out of both Face Hunter and Aggro Shaman when they were meta decks. I just hate Midrange Shaman, always have, and probably always will.

With this in mind, take the propositions and mix them in the Karazhan post-nerf metagame and you will have why I was miserable. I stopped playing decks I wanted to play and started playing exclusively Midrange Shaman, after-all I just wanted to win. This is the first mistake one should really avoid, for all the players which are not part of the pro scene there is absolutely no reason you should play a deck you hate playing just because it is good. Whilst winning is fun, if whilst winning you have the sensation you want to lay down and cry you are probably doing something wrong. In order to reach legend you do not need to play the best deck there is, you just have to get good enough with a tier two or three deck and grind enough games.

First tip then, do not play a deck if you are not having fun with it.

The second mistake you should avoid is forcing yourself to play the game when you don’t want to just because you obsessively want to reach a goal. Going out for a walk is not that bad!  What I mean is that sometimes, and this is especially true when you start losing a lot of games in a row, playing Hearthstone feels like a hopeless endeavour. You feel like you will never ever win a game again. If you feel like this take a deep breath and find something else to do. Nobody is racing you to legend! 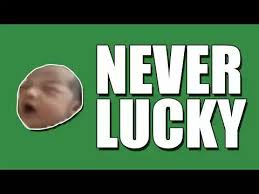 “Ah!” you will think, “the problem is exactly that when in a tilted mood you cannot stop yourself from playing!” Well then I present to you the solution: write down some guidelines and stick them above your computer. I have finally done that after this awful experience, hopefully it will work. If you need some inspiration my guidelines are the following: if I lose 3 games in a row mandatory 10 minutes break, if I lose to Yogg’Saron mandatory 10 minutes brake (luckily it is not as popular anymore), if I have a headache go do something else and finally if I don’t want to cue another game I do not cue another game. They seem reasonable, but god they are hard to follow, you do need some self-discipline!

In general we will all have different ways we start acting once we start entering in the tilt zone, learning to recognise these behaviours and stop playing is essential in order to not want to go cry in our leisure time.

It is a Videogame, it is Normal to get Bored 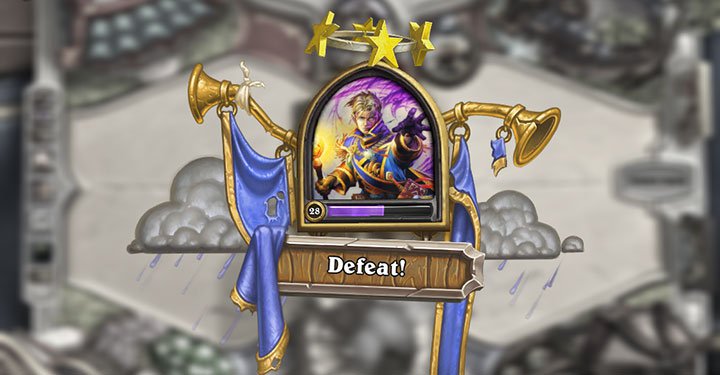 We Hearthstone players need to accept that in any videogame eventually you will get bored of doing the same thing over and over, it is natural. In RPG’s grinding becomes frustrating. In FPS’s shooting people becomes less satisfying. Finally, in card games playing your hand and thinking becomes repetitive. When this happens the best thing that you could do for yourself is just to stop playing for a couple of days/weeks, until the drive to play the game comes back. And don’t worry, your drive to play the game will come back!

The main reason I never want to stop playing this game is that I feel I sunk in it too much money and hours to just quit. I would have wasted too much effort if I stopped playing the game. Additionally, the quest system makes it so that you feel you are losing on money if you do not log in and complete the tasks. The first reason is absurd, even if you have sunk a lot of time and money in the game it has been worth it if you had fun with it, and anyway it is too late to change that. If you really want to stop playing Hearthstone just freaking stop playing Hearthstone and go do something else.

The second thing I mentioned, the quest system, is just a trap of freemium games. The developers obviously want you to continue logging on in order for their game to generate more revenue. It is just business. What you have to tell yourself is that even if you lose on a couple of quests nothing happens, you can always spend £2 when you feel like playing if you really need a pack.

My tip then is, if you are bored of the game, once again, find something else to do. Eventually, if it is meant to be, your love for the game will come back!

Lastly I wanted to give a tip that didn’t quite fit in any section but I think is useful. If you are playing too fast and your head feels fuzzy, even if you are not losing you should stop. Tiredness can severely affect your performance in Hearthstone, after-all it is a game where you need to think (contrary to what some Reddittors might tell you).

Hopefully you will have a better experience than I did in the last few weeks whilst playing the game, and hopefully you will follow my tips the next time you feel tilted and won’t hate every second you spend in front of the screen. In general, if you hate something you should stop doing it, there is no reason you should force yourself to play a game you hate. Don’t waste your leisure time! If you have your own stories about tilt and how you snap out of it let me know in the comment section, it is always interesting to read about other perspectives of the same phenomena.

Finally, If you liked the article consider following me on Twitter: https://twitter.com/matteo_ghisoni , it does go a long way to gain some recognition from the community. Thank you for reading and enjoy the game!