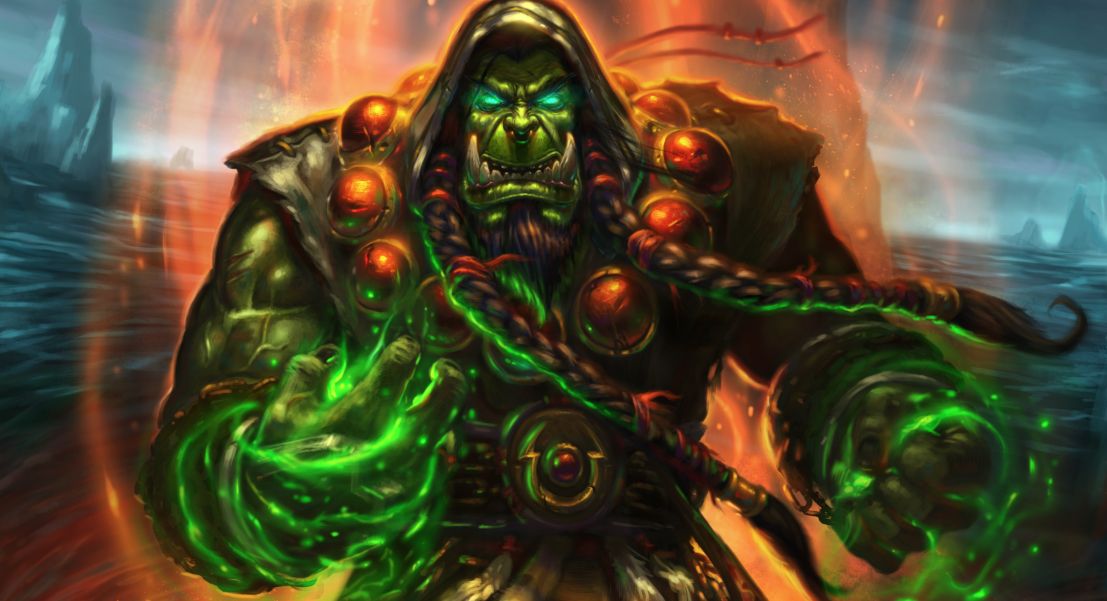 Thrall (birthname Go’el), son of Durotan, was the Warchief of the restored orcish Horde and ruler of the red land of Durotar in Kalimdor. Before the Cataclysm, he was Warchief of all the Horde, but temporarily gave leadership to Garrosh Hellscream in order to lead the Earthen Ring’s effort with Farseer Nobundo against the Twilight’s Hammer cult and elemental imbalance afflicting Azeroth. Thrall and Jaina Proudmoore have become good friends. Thrall is a natural-born leader. He is rarely alone, and in battle often spends much of his time directing his troops. In solo combat his tactics are subtle. He mixes a judicious amount of melee with powerful spellcasting to great effect. The Thrallmar outpost on the Hellfire Peninsula in Outland is named after the Warchief. It is the Horde’s staging area to recolonize the orcs’ former native planet. Thrall is the only Orc in World of Warcraft that has eyebrows. Blizzard developers have replied to have no idea why. He is voiced by Chris Metzen.

Al’Akir the Windlord is absolute ruler over the skies, air, and storms. He is the weakest of the four Elemental Lords of the Old Gods. His domain is the sky over the Elemental Plane, which touches all of the other elements. His mood can quickly change, much like the weather. He is revered by all air elementals and creatures that fly. It is said that he is aware of all air spells that are cast anywhere throughout the multiverse – although this might be true, he rarely becomes personally involved in their resolution unless they affect him directly.

“Al Akhir ??????”, or romanized “Al Akir”, means literally “The Last” in Arabic. This is possibly a reference to Avatar: The Last Airbender, as Al’Akir bends the air around him. Thunderaan, Prince of Air, is one of Al’Akir’s children.

Neptulon the Tidehunter reigns supreme in his domain, the deep ocean. Users of boats and other such water-crossing utilities risk his wrath; entering his domain without express permission is tantamount to doom. He revels in taking those who feel invulnerable, especially Therazane’s rocky beaches and the flames of Ragnaros, when given the chance. He rules over all water, whether it be the sea, the ocean, river or lake. All water elementals worship him, as do all creatures that use water or the cold for their abilities.

It is said that when an intelligent creature drowns, his or her soul will pass through his realm on the way to its end. It is supposed that he keeps those souls which amuse and interest him, but Neptulon only laughs at such suppositions.

Mistcaller Yngvar has taken up residence in the cave on the eastern side of Hrothgar’s Landing and from this cave he manipulates the mists to conceal the Kvaldir and the sea beasts they command. Players can summon him with the Mistcaller’s Charm and then kill him to complete a quest.

Which one of these exceptional Shaman characters is your favourite and why? Let us know in the comments below. Stay tuned for our next part of the series featuring Uther Lightbringer and his legendaries.