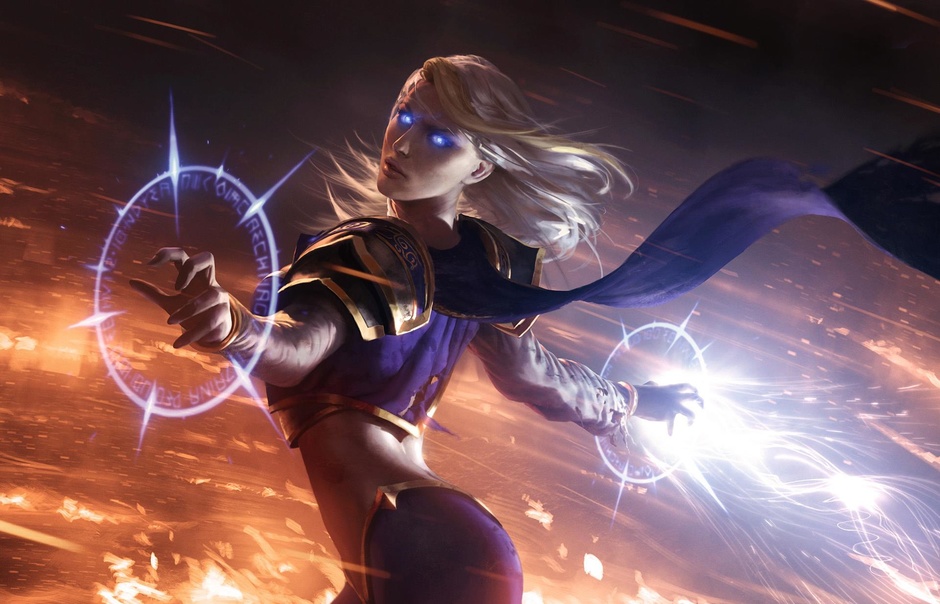 Jaina Proudmoore is the founder and former Lady of Theramore Isle (as well as its only leader during its brief existence), the Alliance’s major port in southern Kalimdor. After the destruction of Theramore, she took leadership of the Kirin Tor. She is the daughter of Grand Admiral Daelin Proudmoore, sister of Tandred Proudmoore and Derek Proudmoore, and the alleged half-sister of Finnall Goldensword. She is also the most powerful human sorceress on Azeroth.

When her magical talent was discovered and she was sent to Dalaran, she badgered Antonidas into accepting her as an apprentice, eventually becoming one of the few female wizards in direct service to Dalaran. Jaina’s hair in Mists of Pandaria is greyish-white with a strip of blonde in front of it, it turned this because of the exposure to arcane magic. This is further explained in the book, “Tides of War”.

Magus or Magna Medivh was the last Guardian of Tirisfal, an ancient line of protectors bestowed with great powers to do battle with the agents of the Burning Legion. However, he was corrupted even before birth and possessed by the spirit of the demonlord Sargeras who used Medivh in his plan to conquer Azeroth. Medivh contacted the orcish warlock, Gul’dan, and together they opened the Dark Portal, which allowed the Burning Legion to begin its destruction of Azeroth. He was slain shortly after by a party led by one of his friends, Lothar. Khadgar was Medivh’s apprentice. Shortly before the beginning of the Third War, Medivh returned as a mysterious prophet, manipulating events in order to arrange the formation of a last-ditch alliance between the mortal races on Kalimdor, guiding them to victory at the Battle of Mount Hyjal. The prophet’s name means “keeper of secrets” in Thalassian. He possessed Atiesh, Greatstaff of the Guardian. He is voiced by Michael Bell in Warcraft III: Reign of Chaos and Cam Clarke in World of Warcraft: The Burning Crusade. He will be played by Ben Foster in the Warcraft film.

Rhonin is the former leader of the Kirin Tor. A powerful human mage, Rhonin was instrumental in breaking the power of the orcs at the end of the Second War by freeing the Dragonqueen Alexstrasza from her imprisonment by Nekros Skullcrusher, a former orc warlock of the Dragonmaw Clan who used the Demon Soul to keep her prisoner. Rhonin actually became Illidan’s mentor, not in the least to try and harness his reckless power, but despite Illidan’s admiration, much of Rhonin’s work involved cleaning up Illidan’s mistakes.

Rhonin dies in Tides of War during a desperate attempt to dampen the mana bomb explosion by using magical defenses of Theramore in the mage tower and names Jaina as his successor. His efforts were at least partially successful, saving his wife Vereesa, General Shandris Feathermoon, and their scouting parties from an explosion. Kalecgos later notes that without this sacrifice, the explosion would have been far more devastating.

Antonidas was the leader of the Kirin Tor of Dalaran and teacher to the archmage Jaina Proudmoore. Antonidas was part of the Council of Six, and he was one of the dominant voices of Dalaran thanks to his natural talent for defensive magic and wisdom. He was killed by Arthas during the invasion of Dalaran. He was 72 years old at the time of his death. Although the forces of Dalaran fought on desperately, the City of Dalaran was obliterated by the demon lord Archimonde soon after Antonidas’ death.

Chris Metzen confirmed that Antonidas would have never been killed if Jaina convinced him to follow the Magus Medivhs warning.

Flame Leviathan is the first boss encounter in Ulduar, found in the Formation Grounds. Most of the players in this encounter do not use their regular class abilities, but instead use vehicles (similar to drakes in Malygos’ third phase). The rest of Ulduar is not accessible until this boss is destroyed.

Which one of these exceptional Mage characters is your favorite and why? Let us know in the comments below.

Stay tuned for our next part of the series featuring Thrall and his legendaries.