Hello friends, I’m Shudogin! Today I am excited to announce the Insider Knowledge series. In this series, I will provide you with the knowledge you need to beat the classic time-tested decks. My goal with Insider Knowledge is not to just to feed you information on which flavor of the month deck does well against other currently popular decks. Rather, through these articles, I want to equip you with the knowledge you need to make your own informed decision on how you want to play around any deck is currently popular.

This will be accomplished by analyzing decks that are “pillars” of Hearthstone. In other words, these decks could almost be defined as their own archetypes. I’m talking about the Warlock Zoo decks, the Control Warrior decks, the Hunter decks, and the like. These decks, or other similar in nature decks, will almost assuredly always be viable options to play, even with shifts in the meta and new card introductions. Why? Each and every one of these examples is simply a fundamental archetype within a class shell that is well-suited for the job. This means that no matter what new cards are introduced or which tech cards are added to suit the current meta, these decks will be around in some shape or form. In this series, I will cover what makes these archetypes of decks work. From the theory these archetypes are based on, to the way these theories are currently implemented in both cards and class shell, to which other archetypes typically do well against this theory; you can expect to walk away with a great understanding of why these granddaddy decks remain popular.

In today’s addition of Insider Knowledge, I will look at Handlock and Midrange Hunter. Let’s jump right in!

It is only fitting that one of Hearthstone’s oldest decks be covered first! For the intent of this article, I will define Handlock as a Warlock archetype that abuses Life Tap to overpower the opponent with unanswerable threats. Traditionally, Handlock involves building a strong hand through liberal use of Life Tap before turn 4, dropping a scary threat on turn 4, and building an insurmountable lead. In this section I will discuss why the core cards included in most traditional Handlock decks synergize well, why Warlock is the class best suited to house these cards, where Handlock’s vulnerabilities are, and why I believe this archetype will remain viable through the foreseeable future. Here is Lifecoach’s take on Handlock!

Handlock in every form utilizes various mechanics to gain value ahead of curve. This means that through one means or another, Handlock is able to drop scary threats before other decks.

Warlock is indeed a great shell for Handlock. While a below average amount of class-specific cards are used in this archetype, Warlock’s hero power Life Tap is the obvious superstar. The only other class that has really attempted the interactions found in Handlock is Mage, due to the card draw offered by

arcane-intellect, the additional safety offered by

ice-block, and the improved Mage control spells. While Giants Mage had a brief moment in the spotlight before the Goblins and Gnomes expansion,

antique-healbot essentially phased out most advantages Giants Mage had over Handlock. Mage’s only response in Goblins versus Gnomes was 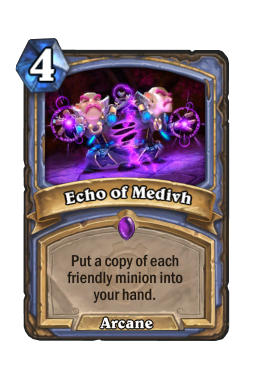 echo-of-medivh. Echo of Medivh usually functions as a great “win more” card, due to rarely being able to be used on the same turn large threats are dropped. If our threats survive removal for a turn, most of the time we don’t need copies of them. Especially due to the increased healing offered by Antique Healbot, spells like Hellfire became significantly less punishing for Handlock, allowing for more aggressive usage. When comparing Hellfire to closest Mage equivalent,

Flamestrike, Hellfire offers much cheaper removal earlier in the game. In the absence of more burst damage being added to the game, I’m confident Handlock will remain a viable Warlock archetype for the remainder of Hearthstone.

The price Handlock pays to make these above average plays is high. In an ideal world, Handlock would simply use Life Tap on turns 2 and 3, without playing any cards. This means that on turn 4, Handlock would have 9 cards in hand, or 10 if playing with the coin. This massive number of cards in hand on turn 4 assures the Warlock of consistent draws. Most Handlocks choose to run four 4-drop threats (whether a demon based Handlock, or a traditional Handlock, most include 4 aggressive plays on turn 4). Using the hypergeometric distribution, we can calculate that if Handlock aggressively mulligan for a turn 4 threat, there is an 88.8% chance of having one by turn 4. That’s pretty good odds! Without the two additional cards drawn from Life Tap, the odds of having a strong turn 4 play drop to 56.3%. This is because

mountain-giant cannot be played on turn 4 without 9 cards in hand! Without some way to gain an additional 2 cards before turn 4, this deck quickly falls apart. From this data alone, it is clear that Life Tap is an incredibly important part of the Handlock “archetype”.

In addition to Life Tap, Warlock’s class theme is value ahead of the mana curve, at the cost of another resource. Most of the time the additional resource is health. While I covered this in Handlock’s synergies, the counter-intuitive health system offered by the Warlock class plays perfectly into another core component of Handlock, the

hellfire, and of course Life Tap, Warlock can easily manipulate its health to whatever level it feels comfortable at. This creates a strong power cycle, where the archetype can abuse its health early in the game to create power plays, then later in the game use the low health to continue making power plays. After Molten Giants have been played, there is little incentive for the Handlock to remain at low health, so he simply heals back up. This can be a very frustrating cycle to play again.

Handlock has three specific points at which it is particularly weak. Playing decks that are able to exploit these points in time leads to consistently beating Handlock.

As a follow-up to point two, the current incarnation of Handlock relies heavily on large Taunted threats to protect itself as the game progresses. If we have direct damage that can bypass Taunt, (think

darkbomb, etc) we can often unexpected end the game.

Let’s take a closer look at examples of specific decks that consistently beat Handlock, and see how they do it.

The past two seasons Face Hunter has been massively popular, and considered one of the strongest Handlock counters. This is due to Face Hunter’s explosive (see what I did there?) early turns, extensive reach, and removal. Before Handlock gets a chance to stabilize the board, Face Hunter has already inflicted huge amounts of damage. Additionally, Face Hunter has a fair amount of utility to bypass Taunted minions, in

Any class that has abundant Silence effects is a pain for Handlock. In addition to liberal Silences, Shaman has ridiculous damage potential. In the early game, Mech Shaman floods the board with particularly hard to remove threats. Nearly every minion played in this deck has a sticky Deathrattle. As the game progresses, Shaman has amply sources of damage in

Control Paladin approaches Handlock in a completely different manner than the previously mentioned decks. Paladin has enough tools to simply negate or remove most of Handlock’s threats.

equality renders the entire board vulnerable to even minor removal effects, and when 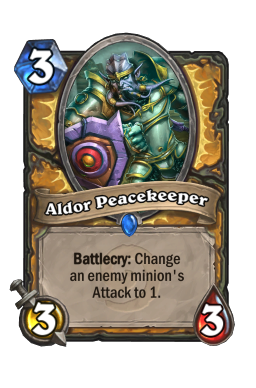 aldor-peacekeeper declares it time to follow the rules, even giants must comply. Control Paladin has the tools to punish Handlock for overextending, and often beats Handlock in fatigue battles.

Each one of these decks beats Handlock in a different way. Many more decks punish Handlock, these three decks simply embody my main points. The key to making a deck that beats Handlock is to simply understand where Handlock is weak.

Midrange Hunter is another example of a Hearthstone archetype. Various incarnations of this deck have seen success both on the ladder and in competitive play since the release of Hearthstone. Various traps fade in and out of popularity, and people tend to heighten or lower the mana curve of Midrange Hunter to suit the meta. Regardless of these changes, the core Hunter build remains the same. In this section I will discuss why Hunter is one of the most consistent classes, where Midrange Hunter’s vulnerabilities are, and why I believe this archetype will remain viable through the foreseeable future. Here is ErA’s take on Midrange Hunter!

Midrange Hunter attempts to play hard to remove minions, while burning down the opponent with the Hunter hero power and spells. Additionally, through use of various traps, enemy minions are denied tempo. In my opinion, the Hunter traps are very similar in purpose. Which trap is played seems to largely revolve around which minions and classes are currently popular. For example, Freezing Trap will almost ways get great value against most Ramp Druid decks, and Explosive Trap will usually be great against a low-curve Zoo Warlock. Therefore, I will focus on more global synergies that are found almost universally in Hunter decks.

Unlike Handlock, in which most of the cards utilized are neutral minions that scale well with Life Tap, Midrange Hunter bases its deck around strong Hunter class cards, with several neutral Beast minions included for synergy. The sticky minions, denial of opposing minions, and great finishing spells, along with the inevitability the Hunter hero power provides, makes Midrange Hunter another one of Hearthstone’s most consistent decks.

While Midrange Hunter is typically an extremely reliable deck, there are a few vulnerabilities.

To defeat Midrange Hunter it is important to wrestle board control away from the Hunter, before the inevitable end arrives. Depending on what traps are being ran, there are several options for defeating Hunters.

Zoo Warlock has always had decent chances against Hunters. A Zoo Warlock such as Demon Zoo is equipped with great early game board control, along with decent removal through 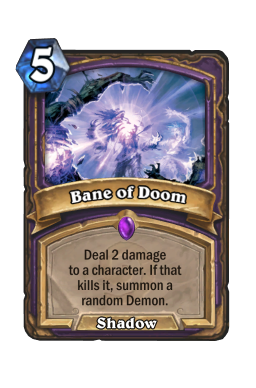 bane-of-doom. When playing Zoo against a Hunter, it is important to not overextend into

Once again, getting a strong early start is critical to winning against Hunter.

deathlord will usually get great value. As the game goes on, the AoE and healing offered by

holy-nova can stop any aggression in its tracks. Honestly, it feels like Priest was designed to destroy Hunter.

Hunter versus Hunter matchups generally end up in damage races, and no other deck is as adept at face racing as Face Hunter. When playing this matchup, the saying is often true that the first person to trade loses. Honestly, as long you curve out nicely, Face Hunter has a great advantage over Midrange Hunter!

I hope you enjoyed my evaluating why the underlying theory behind these deck archetypes work! My goal in this article is to provide general information about some of Hearthstone’s oldest deck archetypes. To my knowledge, I have made the tips and advice in this article fairly timeless, and hope it will be a valuable resource to you as you continue competing in Hearthstone! I greatly appreciate any questions, feedback, or suggestions, feel free to e-mail me at [email protected], or comment below! If you enjoyed my guide, consider giving it an upvote!