Today, I’m doing my first arena guide, and it’s on an often overlooked aspect of arena – the deck’s Mana Curve.

First, we need to understand what mana curve is.

What is the mana curve?

The mana curve refers to the distribution of cards in a deck in relation to mana cost.

To put it in smaller, more specific terms, how many 2 drops you have compared to 4s.

You can look at your mana curve while you pick your arena deck on the bottom of the draft screen.

Why is it important?

A deck’s mana curve is crucial in developing an arena strategy and playstyle.

Drafts are never the same, and the best arena players embrace this and don’t make picks off a rigid tier list.

An adept arena player picks cards that best fit the deck that they’re in the process of making rather than try to cram the best value minions and spells in blindly.

The mana cost of cards is at the heart of balance in an arena. As a result, you should aim to always have a card to play that maximizes your mana each turn.

The curve of your mana also determines how you mulligan and prepare for the game before the turns kick in.

Having a really high curve means you’ll likely keep anything below a 3-drop but if your deck is aggressive, sometimes you’ll throw those same 3 drops out looking for 1s and 2s.

Here are some of the benefits of having a good mana curve:

What is a good mana curve?

This is the biggest question everyone has and I’m going to really try and break it down.

A good mana curve is highly dependent on what kind of deck you’re building and the strategy it employs to win games.

It differs for each class, it differs even between classes depending on what your initial picks are.

I’m going to breakdown a few of my own 11+ win arena deck curves and explain what made them effective.

For the purposes of this analysis, I consider early game as 0,1 and 2 drops and late-game as 5+ drops.

These images are gathered from arenamastery.com and are from my own records. You can follow the link on each one to see the cards that comprise the deck. 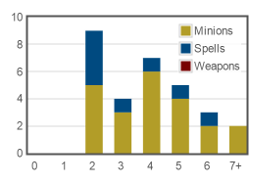 This is in my opinions one of the best value curves you can get in arena.

Things to note are the high number of 2 drops (two of the spells are power-of-the-wild so often a generic 3/2) a spike in 4 drops and a steadily declining curve into the late game.

4 drops represent a big increase in power from the early game drops since they often have good enough stats to get 2 for 1s.

I find that good arena decks often have quality 4 drops that can be coined out on turn 3 or just offer solid mid-late game presence.

What I found most intriguing about this deck, is that I managed to go 12 wins without swipe – one of the most important Druid class spells.

I attribute this success primarily to an outstanding curve that allowed me to get a good early game presence, then either play on curve or coin into my legion of valuable 4 drops and snowball an advantage until I emerge victorious. 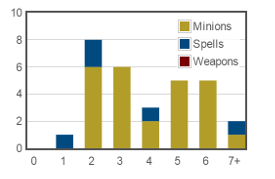 This is what I consider a late-game curve.

Note that even as a late game oriented deck, it has considerable early game in order to compete. However, it forgoes 4 drops in favor of pure late game cards in the 5 and 6 slot.

Sometimes, decks can be skewed towards having more late game.

This is absolutely okay if those late game cards are of a really high quality like cabal-shadow-priest and as long as you’re not blown out before you can play them.

Weaker arena players draft a few late game cards in the initial picks and just decide “okay, I’m making a late-game deck” and focus on picking the best value cards all the way through the draft.

This is absolutely a mistake, and even a late-game deck needs early game in order to survive and thrive.

It also helps considerably when on for example turn 8, you play a 6 drop AND a 2 drop instead of just having to hero power because your hand consists of only 5+ cards. 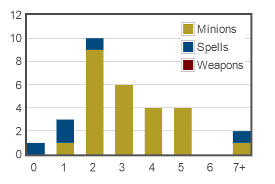 This deck has what I consider an aggro/tempo curve. I don’t normally play this style but with some classes and in the right hands, it can be deadly.

Because of early picks, I decided to play an extremely aggressive style that aims to win before turn 8. The large number of two drop minions meant that in the early game phase, I often had choices between which minions to play.

I also had a fair number of 3 drops scaling into a decent mid-game. My 7+ drops were molten-giant, which can often be played for significantly less depending on your life total, and sprint.

***BONUS*** Because this is my most recent 12 win deck, I can comment on some of the choices I had to make in my draft selection process (which I normally don’t log).

Midway through the draft after already having amassed 6 or 7 two drops, I was offered haunted-creeper vs sprint.

In most instances, Haunted Creeper is the superior pick but I chose Sprint because even though it was an early game aggressive deck, I also needed a way to replenish my hand if my early game push failed to finish my opponent.

In the end,one of my key wins against a 10-win Mage was because I used Sprint after he used blizzard and that gave me the last bit of damage I needed to finish him.

Another key draft selection choice I had was cold-blood vs assassinate. This occurred near the end of the draft when I already knew the shape of the deck.

I picked Cold Blood over Assassinate even though it’s considered a significantly worse card in value terms.

I recognized that if I ever had to use my turn 5 or later spending most of my mana eliminating an enemy minion that I would likely have lost the game already. Instead, since I almost certainly would have the board and tempo, the extra 4 damage from Cold Blood could be crucial in finishing opponents.

Turns out, I won my penultimate game off Cold-Blooding a silvermoon-guardian against a boardless Mage who was forced to use his entire turn removing it whilst my other threats stayed on the board and killed him next turn.

Aggressive style decks are tough to draft well and an overemphasis usually leads to defeat. Sometimes even in aggressive decks, you need to pick up Sprint or other tempo losing cards in order to keep a balance and ensure you have a contingency plan if your early game pressure doesn’t quite pan out. 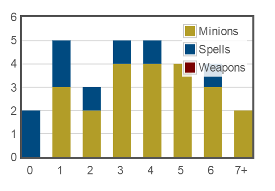 I consider this an even curve. It’s quite rare to get great options at every mana cost, but when you can, it makes for a very well rounded deck.

Warlock in particular is a class that is offered a lot of 1 drops and can often get multiple flame-imps which offer 2 drops worth of stats for 1 mana.

As you can see, this deck is a bit different to the other ones as it has a comparatively low number of 2 drops compared to the other curves.

Minions and spells at 2 mana are crucial in making a good arena deck most of the time, but on occasion, you can offset it by having early game at 0 or 1 mana cost.

This deck’s strength is in its mid-late game. In fact, going through the minions that comprise the list, its 5 and 6 drops are its highest value cards with argent-commander and doomguard championing the late-game.

Warlock is a strange class in arena because it can effectively mix and match styles because of the versatility of life-tap as an aggro supplement or as built in draw to get card advantage.

In this instance, it finds a nice balance with tempo cards like soulfire and voidwalker mixed with the slower value offered by sunwalker and siphon-soul.. 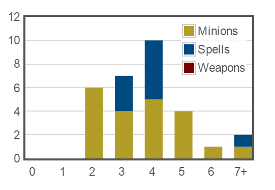 This deck is a rare kind. I consider it to have a stacked curve.

Sometimes in arena, you are offered numerous copies of an incredibly good card. In this arena draft, I managed to draft 5 fireball spells.

The curve is skewed way up high on 4 because of the large number of Fireballs. However, if you look closely, it actually has a pretty standard value curve.

Look at just the minions (the yellow bars). You can see that it resembles the traditional value curve mentioned above with a high number of 2 drops, a spike in 4 drops and a descending slope as the mana cost increases.

Mage drafts are the most susceptible to stacked curves because their class cards like water-elemental, Fireball and flamestrike are so good. You will pick these cards almost every time you’re offered them even if they result in you getting a stacked curve.

However, it’s important to find a balance between the other cards you acquire and try to fill in the curve as best you can.

How to get a good mana curve

Now that we’ve seen what decks with good mana curves resemble, let’s go over a few of the key things that they all have in common and what you can do to get one yourself.

If you have paid attention, and read up on how to get a good mana curve, chances are that you’ll end up drafting a deck that has the potential for 12 wins.

Keep in mind you can’t always get a perfect curve and sometimes need to make do, but when you are offered cards of similar value, look at your curve and assign additional value to cards that fit the curve better.

Maybe you’re short on 2 drops, bloodfen-raptor suddenly becomes one of the best cards you can get.

What if you have no 6 drop? Even priestess-of-elune might not be a terrible pick.

Each situation is a little bit different, but if you take nothing else away from this, look at that number in the top left corner of the card. It might be the difference between you making a good deck with a good curve or a bad deck with a bad curve.

**If you want to see my arena history, I have it entirely logged since I started playing Hearthstone here. Like any other player, I’ve gone through my own learning process and went from a 4 win average to now a 6-7 win+ and infinite status.

***Additionally, I have logged all my 12 win arena statistics and created my own tierlist of sorts from it. Check it out here!