Hey guys! So we have already seen a flavor of discard Zoo Warlock with the first wing of One Night in Karazhan. Well, if you loved that deck, you are in for a treat! because the last week of the adventure brings us an amazingly wonderful card that fits right in the deck. Yes, of course I am talking about none other than 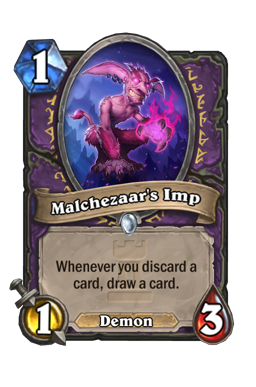 Malchezaars Imp. With this little beauty in play, you basically replace the card you just discarded. It’s time for the discard meta to be upon us!

Without wasting much time, let us take a dive into the decklist. The core is pretty much the same as the standard Zoo Warlock lists with a few small changes so as to fit the current strategy. The synergies are explained as we go along.

Malchezaars-Imp – With Malchezaar’s Imp, we are getting an amazing card which should see play in the discard variant of Zoo Warlock. Discard Zoo Warlock has already seen some play since the first wing of One Night in Karazhan came out. With this card though, this deck becomes all the more stronger. With this on board, You are basically replacing the card that you discarded! Not only does this mean that you don’t lose a card, if played wisely, you can drop an unneeded card for a potentially better one.

Flame Imp – Possibly the best 1-drop in the game. Gives early board presence and trades up with most 2-drops.

Voidwalker – the 1/3 stats are amazing on this one drop, given the fact that it is also a taunt. Combined with Abusive Sergeant, Lance Carrier and Dire Wolf Alpha, this can assure you board dominance by the second turn itself. It is only going to steamroll from there!

Abusive Sergeant – Not to be played as a 1-drop in itself, but to be used as extra damage or simply to trade up.

Argent Squire – Filler 1-drop which has been played in Zoo Warlocks a lot. Not only it is a much needed sticky minion, it also has synergies with the likes of Dire Wolf Alpha, Lance Carrier, Abusive Sergeant and Defender of Argus, especially

Defender of Argus. A taunt with divine shield is really annoying.

Soulfire – Mostly you want to save it for burst face damage, but emergency removal to get the board back isn’t bad either. Especially, when you have 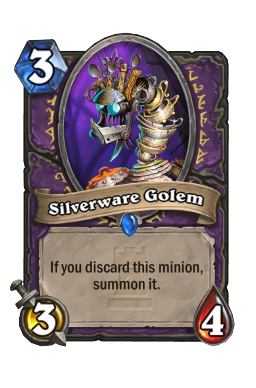 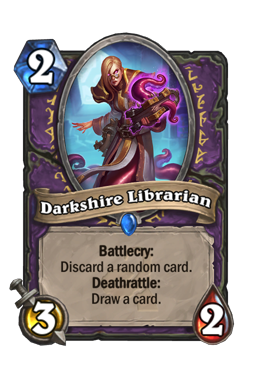 Darkshire Librarian – With all the new discard support it makes more sense to run this card, more than ever. You can use it to trigger Silverware Golem and again, with Malchezaar’s Imp on board, this card will end up drawing you one extra card! Also, when you run out of cards in your hand, while the battlecry does not go off,  you do get the card draw when it dies! Definitely better than any other discard cards that we might run.

Flame Juggler – Standard 2-drop which can be run in almost any deck. That battlecry juggle can be game winning if it ends up sniping a 1-drop or any one health minion, for the matter. 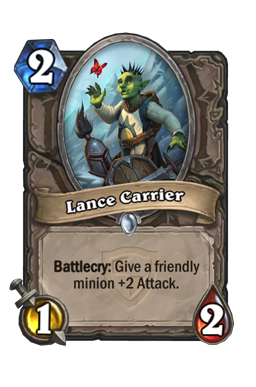 Lance Carrier – Another Abusive Sergeant, but with awkward stats but permanent effects. Works really well the the Divine Shield minions and the 1-drops with the ? stats. You will end up having a 3/3 and a 1/2 on second turn. Not bad, not bad at all.

Dark Peddler– Easily the best 2-drop in the deck. Most of the cards you are offered by peddler have insane value and this card alone will win you the game many times. This can get you that Power Overwhelming or Soulfire for extra burst or Mortal Coil or Elven Archer for that ping or simply a tempo 1-drop like Flame Imp. Not to mention the new MVP, Malchezaar’s Imp.

Dire Wolf Alpha – Helps your Imps and other low mana minion get efficient trades. Other times, just acts as extra face damage! All the more important because with addition of Malchezaar’s Imp, we now have two additional 1/3 minions.

Silverware Golem – One of the core cards of the Discard synergy. Being able to generate tempo at the expense of the drawback of your discard cards by summoning a 3/3 instead of losing a card? What is not to like? This card oozes of pure value in terms of tempo.

Argent Horserider – This card is here to get efficient trades by combining it with buffs to use as immediate removal. Or, you can just use it as additional face damage to finish off your opponent. There comes a phase while playing any Zoo deck where you win just be going face. This card is of great help at that moment.

Imp Gang Boss – This is one of the best 3-drops in the game. The deck could use something that can actually stick to the board. The generated Imps help a lot, since the deck is basically based around boards control.

Defender of Argus – This is too good a card not to play in a Zoo Warlock deck. With the correct placement of minions, you’ll be able to get amazingly optimal trades and push more damage to the face. Sometimes also provides that crucial health to get out of AOE range.

Doomguard – The finisher. This card has always been the soul of Zoo Warlock decks. And this is all the more better now, with Malchezaar’s Imp and Silverware Golem in place. These two cards basically remove the discard drawbacks associated with Doomguard to some extent, making it all the more powerful. With Imp on board you will cycle the two cards immediately, getting a 5/7 body with Charge without any drawback. And if one of the discarded cards is Silverware Golem, you might have already won the game.

Well, that’s all about the deck! If you loved the discard Zoo Warlock, you are going to love this even more. Also, this is just a deck skeleton. If you think that any card is best replaced by something else, do try it out and let me know. Because, I know that I’ll be play testing! Any and all feedback and suggestions are welcome. You can always contact me on Twitter (ManveerS_07). Cheers!