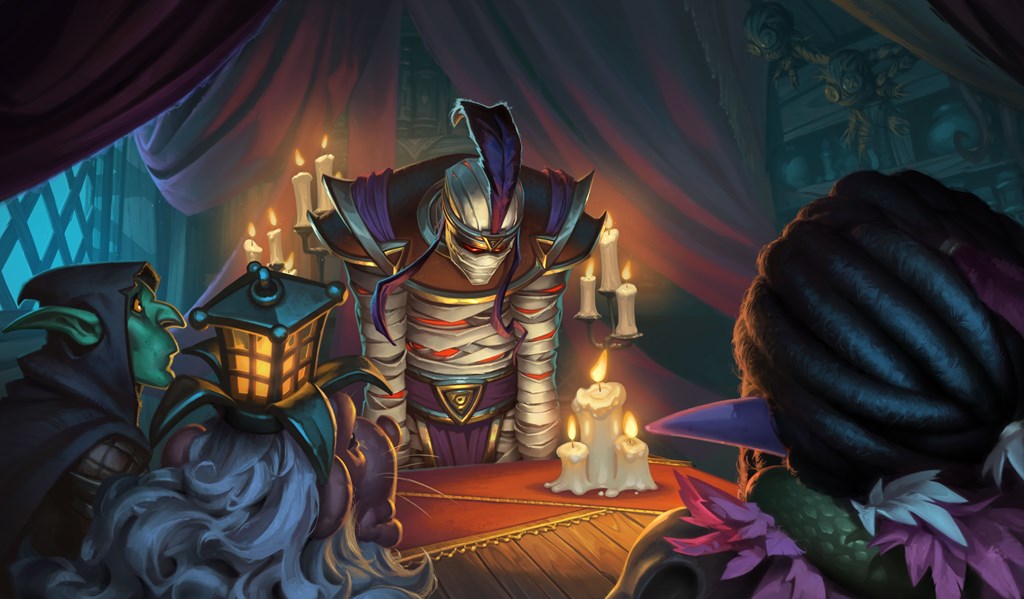 While Hunterace’s skill definitely set himself apart from most of the competition, he found success by building some of the most interesting decks featured at the tournament. He included interesting tech cards in each of his decks and brought a deck that players and fans alike wrote off.

In order to get a better understanding of just how he was able to snag the biggest achievement of his Hearthstone career, let’s take an in-depth look at each of the decks in Hunterace’s powerful lineup.

Hunterace’s Control Warrior list was built to outlive his opponents and beat them in the late game. This isn’t a standard list you’d see on ladder, however.

The inclusion of a Baleful Banker, a two-mana 2/2 card that shuffles a copy of a minion you have in play into your deck, indicates that this deck was built to bust other control decks. This card can potentially be used in combination with Archivist Elysiana to add up to 20 extra cards to a deck, meaning that fatigue is almost never an issue. The sheer power of Archivist Elysiana is enough to make many players ban a deck she’s included in. But when it goes unnoticed, this deck chokes out opponents until it wins.

Imagine a deck that can generate four powerful 8/8 minions in a single turn. If that’s not enough to scare you, imagine it happening again. This is exactly what Hunterace’s Mage addition has the potential to do, and it can be terrifying.

Even if it’s not used for extra value, creating two seven-cost minions from one can be backbreaking for many decks. A combination of Conjurer’s Calling and cards like Rabble Bouncer and Zilliax for anti-aggro purposes forms a nearly-unbeatable deck.

The introduction of the lackey minion type in Hearthstone bolstered many aggressive decks. These one-cost minions are generated by other cards and they have small effects that can turn the tide of a game.

Rogue especially enjoys these new cards since tempo is the name of the game for the quick and burst-oriented class. Cards like Vendetta and Blink Fox also give the deck a Burgle feel, a since-retired card that allowed a player to generate two random cards from their opponent’s class. Combining the strength of this deck and cards from the opponent’s class can prove deadly, and luckily for Hunterace, it did just that in spades.

This was the most controversial inclusion in Hunterace’s lineup because many players believed that Shaman wouldn’t be a viable class at this tournament. Hunterace wasn’t one of those players, however.

He created what almost looked like a homebrew control deck, including cards that many don’t even recognize as viable, such as Ancestral Healing and Omega Defender. These cards ensured Hunterace’s late-game potential, generating value off of already-established minions and getting more procs off of Hagatha’s Hero Power, which generates a random Shaman spell every time a minion is played. Most decks at the tournament simply didn’t possess the tools necessary to compete with such value and crumbled as a result.

Hunterace shocked the world with his incredible deck building skills on top of his playing power, which led to his victory at the HCT World Championship. Many fans can’t wait to see what he has in store at the next major event. His first match of Hearthstone Grandmasters will be against teammate Jaromír “Jarla” Vyskočil on Saturday, May 18.