Hey, guys! I’m Chriseroi, a relatively new Hearthstone player who started in June of 2015 and has been playing and enjoying it ever since as a high school student (although, it’d probably be more accurate now to say I’ve been playing as “a recently graduated high school student”). Don’t write me off just yet, though; I love Hearthstone just as much as you guys and have been working my way up ever since I started. Thus, the full title isn’t actually “Hearthstone Journal,” but rather, “High School Journal.” While I heavily enjoy reading a lot of these guides on Hearthstone Players from various parts of the community, each of these guys seem to have some sort of luxury that I can’t afford, unfortunately, whether it be time, money, or both. I wanted to contribute to the community by giving you a peek inside my own little amusing journey, whether it’s climbing up the ladder, getting better at Arena, or even just me building up my collection. I really hope you enjoy reading these little journals every week as much as I enjoyed writing them!

This is part six of a continuing series. Be sure to read the previous entries as well!

Nate looked up from his computer, glancing over to the clock on the wall beside him. It was just 10 minutes short of noontime, at which he was to open his 50 hard-earned Wrath of the Old Gods packs that he bought himself with gold, saving up a fortune that was just shy of three months’ worth of daily quests and match wins.

He didn’t want to bask in the glory all by his lonesome, though, so he had invited his Hearthstone partner-in-crime over to open packs together at 12:00 pm sharp. Nate started to wonder if he was going to be late, and hoping that wasn’t to be the case, instead starting thinking about how he felt about Hearthstone in the past couple of months.

Oh, and Nate got this. I mean, I got this. oh god Murloc Warleader why did you have to be an epic

It’s been a strange ride, to say the least. Arena hasn’t been played in months. At this point, he hasn’t even gotten that far on the ladder; he’s only been going back for daily quests and Tavern Brawls, and even he’s starting to slack on those, missing a couple every now and then. The packs that he’s earned so hard for all this time required an incredibly amount of discipline and self-restraint not to open by himself, and he sat there wondering if he was simply getting tired of Hearthstone. Nah, he thought. Probably just lazy.

There was a lot to look forward to in the new set, but the main component he wanted to think about was how he wanted to proceed post-Standard. He was hoping that the game would be shaken up with the arrival of game-changing legendaries, and just as he was wondering which legendary he was hoping to get, Nate’s phone started to vibrate. Picking it up, the first words he read were:

As the clock struck noon, Nate decided to open his packs anyway.

Before I get started with anything major, let me show you what I received in 75 packs; 15 were Classic packs from Tavern Brawls and Spectate a Friend quests, while 47 were WotOG packs bought with in-game gold. I then went ahead and got 13 more free WotOG packs through the one-time Standard quests and first-time bootup of Hearthstone upon the arrival of the expansion. Oh, and quick note: I decided to exclude any new Classic commons or rares that I got from the 15 Classic packs since they were all pretty mediocre, unfortunately.

I think it’s crazy that I actually netted not only four legendaries, but one golden one, too! I mean, sure, this marks my second King Krush, and King Mukla is PRETTY useless, but hey, two legendaries is better than none! Speaking of which, the other two legendaries I got from the WotOG set, Hallazeal the Ascended and Malkorok are pretty insane looking, but I can’t tell if they’re any good, at least not yet. I haven’t seen them around in any competitive deck lists, but who knows? Maybe they’ll be fun to use one day… I’ll keep them on the backburner for now.

Anyways, there’s a lot of cards to look at, here. I’m really excited to try out Cult Sorcerer and Flamewreathed Faceless, along with all the c’thun-related cards, but first, I disenchanted all the newly-nerfed cards that were nerfed earlier a while back. If I really want them back sometime in the future, I’ll just craft them or whatever, since I literally lose nothing in the process.

Well, just to update those of you who have read my previous entries in my own personal collection of ramblings, I haven’t updated with a real journal entry in MONTHS. It’s not because I got bored with Hearthstone or anything (okay yeah it’s a little bit of that), it’s just more like the end of school has kept me really busy with super little time to do much of anything outside of schoolwork. Actually, that’s okay, because all that time away from Hearthstone REKINDLED MY LOVE FOR IT (not really), but I’ve got a whole set of new cards to test out with Standard mode. So let’s see what we’ve got, because I want to spend the next couple of updates experimenting with new decks and seeing how they work and how well they perform, if that’s okay with you guys.

I already know I’m still in love with my pre-existing Tempo Mage decklist, and aside from mainly Mad Scientist, the bulk of the decklist is still Standard-compatible. So, I’ve thus decided to adapt it for Standard, and set that aside as one new deck. However, C’Thun’s still a thing I really want to try.

So maybe, I can modify that same decklist and build it around c’thun, as he seems to be incredibly powerful for a legendary when paired with twin emperor vek’lor, who, by the way, I instantly crafted after disenchanting the gorgeous amount of duplicates I got when I was doing the mega-pack opening session earlier. 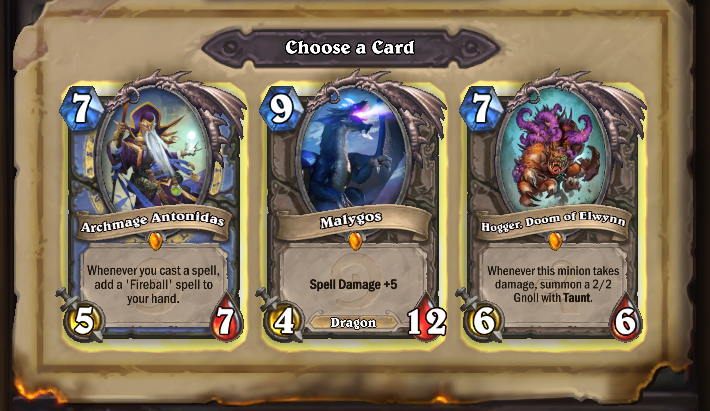 The idea behind the newly-revised Tempo Mage is to utilize the new strong class minions offered by the WOTOG expansion and combine those with cheap core Tempo Mage minions and spells from the older card sets to create a stronger, more balanced decklist, capable of defending itself against many other deck archetypes. It looks like it turned out nicely, but just in case, let’s look at what makes the Tempo C’Thun Mage work as well.

The idea behind the brand-new Tempo C’Thun Mage is to try out the new C’Thun synergizing minions and combine them with a tempo-oriented design in order to pressure the opponent while building up a super strong minion to close the game. Looking at our win conditions, it seems we’ve got two: using Flamewaker to push the game quickly into our favor early on, or using C’Thun to close out the match after a moderately paced late-game. I’ve tested it out a couple times, and I’ve got to say, I might like this better than the revised Tempo Mage decklist! It could be the fact that there’s more minions than there are spells, or maybe the fact that we’re just using C’Thun, but it still just feels good and fun to use, which is probably one of the most important factors of a decklist, in my opinion.

I’ve tested out both of these decks considerably, and I can say with the utmost confidence that they work. They work enough to get me to Rank 15, at the very least, but I’m sure with more skilled piloting, they’re Rank 10 material. But that’s enough for now.

Not sure. Dinner, maybe? It’s getting kind of late on my end, and the moon’s starting to come up. I’ll probably go grab something to eat while I start thinking about making a Priest deck for next time, and quite possibly a retooling of Aggro Shaman to fit WotOG, but essential nutrients first and Hearthstone-related activities after that.

I’ve retooled these journals a bit to slightly more brief, but hopefully with the sake of being more frequent than they have been in the past few months! Thanks for reading, by the way! I really hope you enjoyed what I’ve written here, and I’ll try my best to write a new one every now and then. Oh, and hey, if you guys want me to write up a little something-something, like a guide or whatever, for any of the decks I’ll be talking about here, just let me know and I’ll see what I can do. See you guys in Hearthstone!