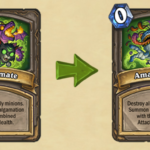 Hearthstone is receiving its newest patch, 18.6.1, tomorrow and it’s aiming to bring balance to the two newest game modes, Duels and Battlegrounds.

All of the changes to both modes look to knock the power level of strong and consistent strategies down a couple of pegs, while simultaneously buffing weaker and inconsistent gameplans to bring them closer to balance.

Here are the official patch notes for Hearthstone Patch 18.6.1.

Warrior’s No Guts, No Glory

What this means for the Duels meta

Since multiple neutral treasures are receiving updates, this benefits players who were unlucky and unable to get initially strong treasures, evening out the power difference a little bit. In addition, overperforming and powerful classes with strong Hero Powers or treasures, like Shaman and Demon Hunter, are receiving nerfs to make their pick rate less auto-pickable and more for players who enjoy that class.

On the opposite end of this spectrum, classes with weaker Hero Powers, like Rogue, Warlock, and Warrior, are all receiving buffs to make them more enticing to play. Overall, these changes assist in keeping the new game mode fresh and exciting until the next season.

What this means for the Battlegrounds meta

With Elementals no longer consistently in the pool, this allows other and older strategies to take place since Elementals have been prominent in all stages of the game. In addition to no longer being guaranteed in the minion type pool, Elementals themselves are also receiving nerfs. The changes are lowering the consistency of late-game Elementals by reducing their stats, like Garr and Lil’ Rag, or increasing their Tavern Tier cost, like the Gentle Djinni.

Aside from Elemental nerfs, minion types around Elementals have received sweeping buffs at all stages for Demons, Mechs, and Pirates. This allows those minion types to remain competitive since their pick and win rates have declined over time with the inclusion of Elementals.

Menagerie strategies are also receiving adjustments to their mid and late game. While the Amalgadon nerf will hurt its consistency since it can no longer count itself as an adaption option, the revert to Lightfang Warden’s old nerf will give Menagerie an opportunity to stave off a weak early game much more easily than she was able to in the past. Curator’s Amalgam is also receiving a one health buff that will help him be a potent pick again since the two newest types, Elementals and Pirates, didn’t synergize too well with a free 1/1 minion that was already on the board.

As with other recent Battlegrounds updates, lower-performing heroes have been buffed or adjusted. While top-tier heroes have been mainly untouched this patch, buffing the less-popular heroes will allow the disparity between their power levels to be less drastic and more even.

Out of all the buffs coming to the newest heroes, one of the more peculiar ones to look out for is the buff to Elise Starseeker. The one gold discount alongside the ability to specifically look out for minions will improve her consistency at a potent level.

You can try out all of these changes when Hearthstone Patch 18.6.1 is released tomorrow, Nov. 5.