Hearthstone is introducing one of its largest updates in a while tomorrow by adding the game’s newest mode, Mercenaries. Patch 21.4 isn’t a balance update for all of the modes that already exist within Hearthstone.

The new mode has both a PvE and PvP version for players to try. But to play the competitive version, you’ll need to unlock it through gold. In total, to fully upgrade your Mercenaries mode, players will need to spend 900 gold. The exact breakdown is as follows:

Aside from the new Mercenaries mode, the Hallow’s End Event begins its preparations in this update, with full festivities coming in Patch 21.6. In the update going live tomorrow, players can purchase cosmetics for Constructed or Battlegrounds. While the details of what will join Hearthstone for the full event are unknown, the Hallow’s End Arena lets players go dual-class within the mode. 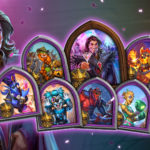 There will also be bug fixes and quality-of-life updates with Patch 21.4:

You can try out the new Mercenary mode when Hearthstone Patch 21.4 goes live tomorrow.