Hearthstone’s balancing team is bringing many changes to various game modes, plus some bug fixes and quality-of-life improvements, in tomorrow’s Patch 21.3.

For Standard and Wild modes, the highlights of the update are Blizzard’s decision to both increase the damage required in the first two steps for Standard and banning the Warlock Questline in Wild. There are many more efficient self-damaging cards in Wild, according to Blizzard, making it possible for The Demon Seed to be completed at a fast rate. So the devs are banning it to protect the format from problematic gameplay. Besides that, a nerf to Runed Mithril Rod may also have an indirect effect on the Quest’s power.

The update even includes a little buff for some key cards to Pirate Warrior and Hero Power Mage that could lead to them seeing more play. Battlegrounds is receiving numerous balance updates to heroes and minions, too.

Here are all the changes within Hearthstone Patch 21.3. 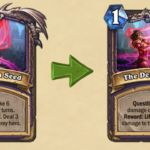 Prophet of the Boar

“Ramming Mount will no longer be draftable in Arena. Additionally, we discovered a bug with some card offering rates. We’ve addressed that bug and will be re-adjusting the offering rates to match the intended rates, which should help move all classes closer to the 50% class winrate.”

You can check out the changes in Patch 21.3 when it’s released tomorrow, Sept. 21.