The newest update is bringing a wealth of changes to Battlegrounds, Duels, and Arena rotations all in preparation for the upcoming United in Stormwind expansion, which launches on Aug. 3.

Here are the full notes and updates for Hearthstone Patch 21.0. 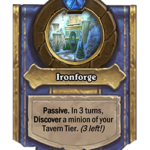 The newest Battleground hero is Dungar’s Gryphon, Galewing. Players are given a choice to select a flight path that lasts for one, three, or five turns and players can repeat flight paths. But the previously selected flight path must be completed before you’re allowed to choose another one.

There are two ways to consider playing Galewing, either going for value or tempo. If you try to play for value, selecting the Plaguelands flight path on the first turn will allow you to reach a higher Tavern Tier at a faster and discounted pace before your opponents.

If you want to gain an early tempo lead, flying toward Ironforge will allow you to fill out your board fairly quickly, saving extra life and finding potential triples.

This hero will be available to players now with Battlegrounds Perks before being formally released on Aug. 10.

With the patch going live, all players’ Duels ratings will be reset and the pool of eligible cards you can build your initial 15-card deck from will be updated to the following expansions:

In addition, there will be new Passive Treasures that you can potentially find. 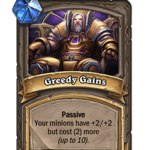 The following cards have been banned from between-game card buckets and won’t be Discoverable:

Seven new designer card buckets have been added as well:

When United in Stormwind launches on Aug. 3, the Arena will include cards from the following sets:

“After regaining his freedom, Illidan was eager to prove himself once and for all. But even as he journeyed far from his homeland and joined forces with new allies, the thirst for power never left him. It was only a matter of time before it interfered with his judgment, resulting in more dire consequences than ever before…Defeating all 8 bosses in this linear adventure will reward 1 Demon Hunter pack, containing only Demon Hunter cards from Standard.”

“When the Rewards Track refreshes when United in Stormwind launches, all players will automatically be granted any unclaimed rewards on both the free track and the Tavern Pass track (if purchased), and a completely new Rewards Track of unlockable loot will take its place.

The Forged in the Barrens Tavern Pass will expire with the launch of United in Stormwind and a new Tavern Pass will be made available for purchase—offering a host of brand-new cosmetic rewards and XP boosts.

As a reminder, Battlegrounds Perks are now available as a standalone purchase, separate from the Tavern Pass.”

You can try out the new Battlegrounds Hero and Duels meta now since Hearthstone Patch 21.0 is live.