Hearthstone’s Patch 20.8 is going live today, marking the beginning of the United in Stormwind reveal season.

The next expansion following Forged in the Barrens continues the storyline that was introduced for the Year of the Gryphon, on top of adding multiple new cards, keywords, and mechanics. In addition, players can pick up the free Flightmaster Dungar card by logging in.

In the meantime, there are many updates happening to both the Battlegrounds and Duels game modes. For Battlegrounds, many heroes are being introduced and adjusted to be more viable or less top tier. Aside from the playable heroes, multiple minions are getting rebalanced to receive buffs. In addition, Blizzard has teased the next major days for events like the Fyre Festival and the next two chapters of the Book of Heroes and Book of Mercenaries.

Here are all of the changes coming with Hearthstone Patch 20.8.

United in Stormwind will launch worldwide on Aug. 3 with 135 new cards. You can find the full schedule for card reveals, and see which cards were announced today, by visiting the card library. 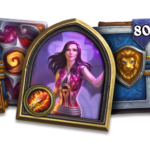 Bartender Ve’nari will also be available for pre-purchase before United in Stormwind goes live as a stand-alone item and can only be redeemed once per account. Bartender Ve’nari will be usable in-game, in the Battlegrounds game mode, no later than Aug. 31. Battlegrounds Perks are available upon purchase and expire at the end of the United in Stormwind expansion cycle.

Flightmaster Dungar is a three-mana 3/3 Legendary neutral minion that reads “Battlecry: Choose a flightpath and go Dormant. Awaken with a bonus when you complete it.”

Players with Battlegrounds Perks will have early access to Kurtrus before it’s formally released on July 15. 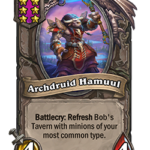 Tiki Ragnaros is a skin you’ll be able to use in Battlegrounds down the road.

The Fire Festival is back. This year, Ragnaros is throwing a house party in the Firelands. Complete Legendary quests for up to six Year of the Phoenix packs and finish all seven quests to earn the Druid of the Flame Malfurion Hero Skin. Ragnaros’ Fire Festival Tavern Brawl will return on July 7, and on July 14, a completely revamped Burndown Brawl will take its place.

Stormwind is big on Trade, so you’ll need a lot of coins. Fortunately, two new Collectible Coins will become available on Aug. 3. Collect all 135 United in Stormwind cards to add the Lordaeron Coin to your collection.

Blizzard will reveal the second coin when it provides an update on what to expect from the Rewards Track for United in Stormwind in late July.

“Kurtrus Ashfallen had a vision. He saw a Warlock in the Barrens summoning the dreadlord Anetheron, an evil demon who took everything from Kurtrus during the Third War. Abandoning his fellow Demon Hunters, Kurtrus sets out to stop the Warlock. On the way, he joins forces with Cariel Roame, Paladin of the Silver Hand, who hopes to find her long-lost sister in the Barrens. What they find on Dreadmist Peak, heart of the demon-worshipping Cult of the Burning Blade, will be revealed in Book of Mercenaries Kurtrus, launching on July 13. Defeating all 8 bosses in this linear adventure will reward 1 Demon Hunter pack, containing only Demon Hunter cards from Standard.”

“Gul’dan himself would admit that he is no hero, but his villainous exploits are equally legendary. Banished from his original clan, he made a pact with a demon to get his revenge, and later oversaw the creation of the Horde, the Dark Portal, and the first death knight. All the while, Gul’dan was eager to see how much power he could obtain before it caught up with him…Defeating all 8 bosses in this linear adventure will reward 1 Warlock pack, containing only Warlock cards from Standard.”

Players can sign into Hearthstone and get Flightmaster Dungar for free when Patch 20.8 goes live later today. Players who are excited for United in Stormwind can either purchase the standard bundle, which has 60 packs, for $49.99 or gain access to Lady Katrana Prestor and Ve’nari Alternate Battlegrounds Bartender through the mega bundle to get 80 packs for $79.99.