The newest mid-set for Hearthstone’s The Madness at the Darkmoon Faire expansion, The Darkmoon Races, has been out for nearly a week. But the mini-set is receiving an emergency balance change tomorrow for one card due to its ability to combo with old Wild cards from Knights of the Frozen Throne, Wretched Tiller and Deathspeaker.

Aside from nerfing Hysteria for the Constructed format, there are multiple changes coming to the Duel mode.

Here are the full notes for Patch 19.4 and their implications on the meta. 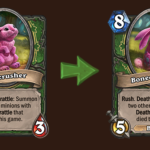 Herald of the Scaled Ones

Updates to the Treasure Pools

What these changes mean for their respective metas

Hysteria’s nerf will effectively remove Wretched Tiller Warlock and Priest Combo decks from the game. While both classes will still have potent decks in Wild, namely Razakus Priest, this new combo was a strong force on the ladder, sometimes assembling and performing the combo by turn six or seven.

Hysteria’s combo potential isn’t removed entirely, though. Warlock can still give minions to the opponent thanks to Treachery, but this combo is more inconsistent than Wretched Tiller and unlikely to shape the meta. Hysteria will now mainly be used as a control tool to clear opponents’ boards.

In the Duel mode, the balance updates as usual are hitting powerful strategies while bolstering weaker ones. The most recent nerfs target Deathrattle Hunter’s consistency by making their Hero Power random and increasing Bonecrusher’s cost. This will make the deck more vulnerable to defeat. Demon Hunter has also received another consecutive nerf, this time hitting the Outlander Hero Power, which could often garner free damage due to constantly Outcasting your cards.

The two buffs within this patch target Priest’s weaker treasure while giving a major buff to Paladin, a class that’s been struggling within the format. While Priest had other potent treasures, like Scion of the Deep and Shadow Word: Void, the buff to Fractured Spirit might open up potential Silence Priest archetypes.

Paladin’s original treasure, Royal Greatsword, allowed for a lot of potential mana cheating thanks to its ability to summon many expensive Legendary minions. But the class still has yet to reach the top of the meta like other classes have done in the game mode. The buff to Royal Greatsword may allow for the original style of Paladin to return with more consistency thanks to the cost reduction.

You can experience the balance update when Hearthstone Patch 19.4.1 goes live tomorrow, Jan. 28.