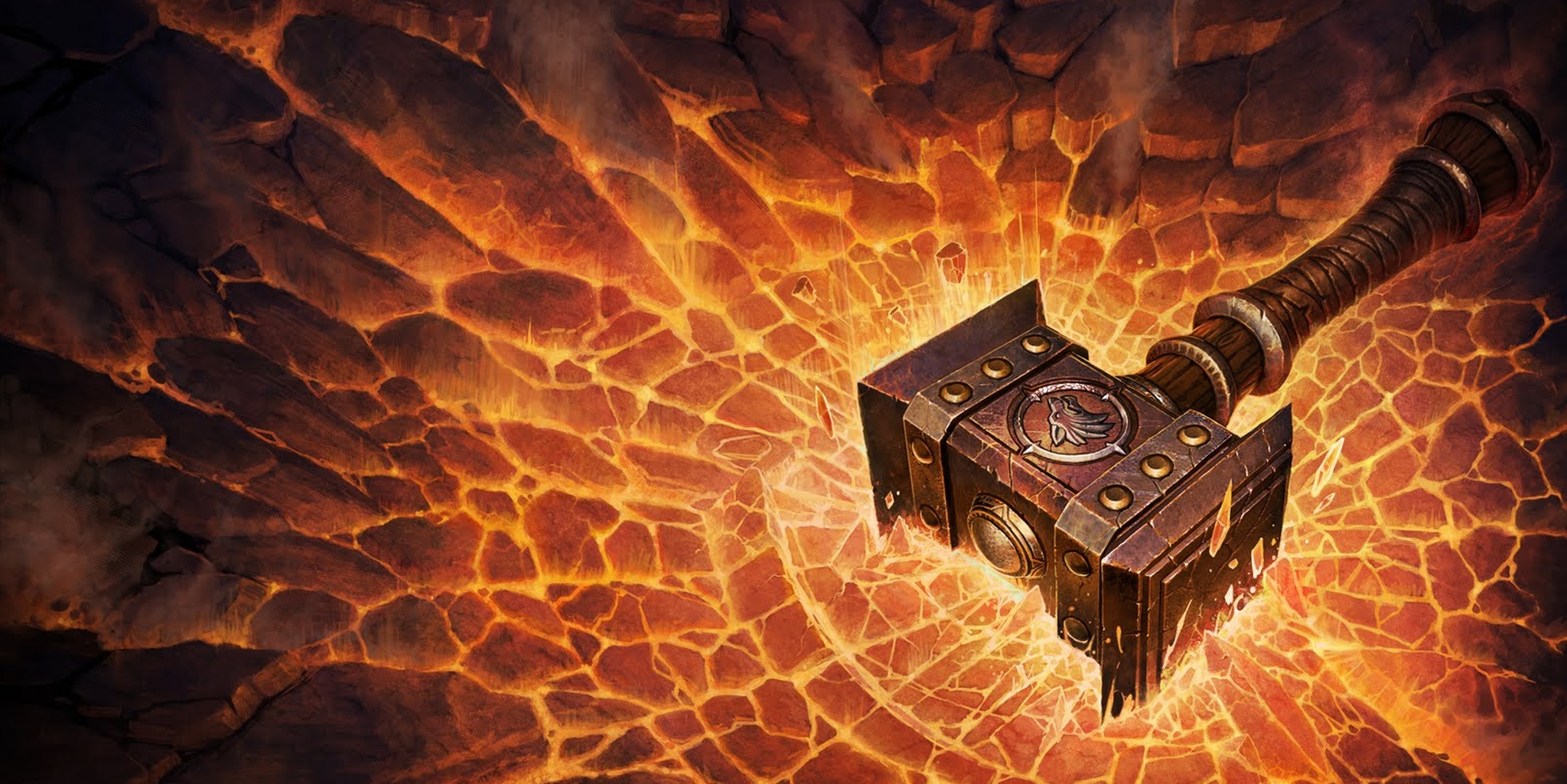 Recently Blizzard announced a string of balance changes that edited some of the more oppressive cards populating the Hearthstone meta. Offenders like Tuskarr Totemic and Yogg-Saron were gutted, but they also focused on some classic cards like Charge, Abusive Sergeant, and Rockbiter Weapon.

So of the remaining cards that will be in Standard for a while (namely the classic set, and those released in Whispers of the Old Gods and One Night in Karazhan, which ones are most likely to be hit with the nerf bat? Obviously Tunnel Trogg is overpowered, but it’s rotating out next year.  The following are cards that could well demand some developer intervention in the future—if only to save us from decades of complaining.

Rockbiter Weapon wasn’t really the problem. Yes the added three damage let you burst characters down in big chunks, but it’s hard to imagine a bump to two mana is going to change anything. The issue is Doomhammer, a five mana, 2/8 weapon with windfury that single-handedly wins a lot of Aggro Shaman games. Seriously. You make it through the Tunnel Trogg and the Totem Golem and just when you think you’re finally, finally above water, Thrall equips his win condition and it’s all over. If Shaman continues to be a problem past the next rotation, I think it’s finally time to adjust Doomhammer to be a little less ridiculous.

Alexstrasza is a lynchpin in a lot of control decks with burst potential. It’s the great equalizer. Hopelessly behind? Drop Alex and set your opponent to 15 health. It’s pretty effective, and certainly not a problem when aggro decks run the meta, but it’s hard to make the argument that the effect is balanced. A lot of time Alexstrasza’s text might as well read “deal 15 damage to the enemy hero, summon an 8/8.” If Blizzard is serious about keeping an eye on the classic set, I feel like this nerf is only a matter of time.

Is Druid’s basic set just generally too powerful? We all expected the class to lose steam after Blizzard stripped the Force of Nature/Savage Roar combo of its potency. But Token Druid is still a top-tier deck, and that’s mostly because cards like Innervate allow Malfurion to produce some truly insane swing turns. Obviously you don’t want to destroy Druid’s identity—which relies on other mana-generating spells like Nourish and Wild Growth—but maybe it ought to be a little less insane.

This one might be a little unexpected, but Tempo Mage really relies on the discount offered by Sorcerer’s Apprentice in the early game. When you combine it with Mana Wyrm, Arcane Missiles, Flamewaker, and Arcane Blast things get out of hand very quickly. I don’t think the effect destroys the game, but I do think it’s sort of weird Apprentice isn’t a 2/2 like Pint-Sized Summoner. If a two-drop has a potentially game-winning effect, I’m not sure if it should be able to trade with 2/3s.

Fiery War Axe is similar to Sorcerer’s Apprentice in the sense that it’s a crucial card for every Warrior deck in the game. If we’re being honest, War Axe is probably more powerful (and more broken) than any minion, spell, or weapon that’s ever been released in Hearthstone. It’s an instant answer to early game aggression. Should it be nerfed? I mean, maybe? It’s just difficult to know what you’d change it to while still keeping it viable. You can’t make it a 2/2, you can’t increase the mana to three, I don’t know man. Fiery War Axe is unreasonably powerful, but I doubt it will ever be changed.

Spirit Claws is the only card I’m mentioning from One Night in Karazhan, but seriously, why can Shamans equip a 3/3 weapon for one mana? Yeah they need to have a minion with spell damage out but… that’s really not that hard. Currently all Midrange Shamans are running double Spirit Claws, and it’s made an already great archetype even better. It wouldn’t even be that hard to nerf! Just make it two mana! Back in Goblins vs. Gnomes Blizzard printed a Rogue card called Cogmaster’s Wrench that was a 1/3 that became a 3/3 if you had a mech. It cost three. How did we go from three to one? Hearthstone is a great game, but sometimes the design consistency is profoundly frustrating.