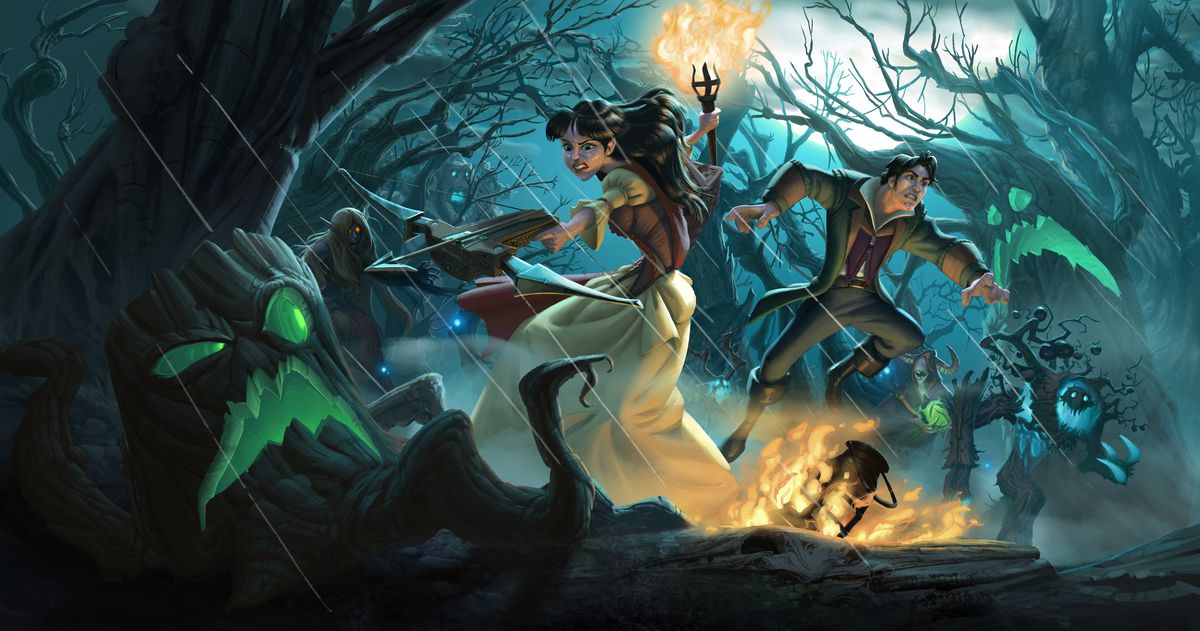 The Witchwood’s exciting new game mode, Monster Hunt, is now available in Hearthstone, allowing players to head into the woods to hunt down terrifying bosses. While the mode is similar to Dungeon Run from the Kobolds and Catacombs expansion, it requires a new strategy.

When playing Monster Hunt, you take control of one of four different hunters: Cannoneer, Houndmaster, Time-Tinker, and Tracker. Each hero has a unique deck, Hero Power, treasures, and nemesis.

Although each hunter is slightly stylized after one of the main Hearthstone classes, you can draft cards from any class. Here are some tips that will help you get acquainted with each hero and fight your way through the woods.

Darius Crowley is the Cannoneer in Monster Hunt and his strategy revolves around his cannons. At base level, you control one cannon that deals one damage. Your Hero Power fires the cannon, and if it kills a minion, it refreshes and can be used again. Cannoneer’s strategy relies heavily on how you position your minions so that your cannons are in the optimal spots for removal. Any treasure that helps buff your cannons is typically a good option to take.

Two effective ways to build this class involve Rush minions and Inspire minions. Rush minions are good in Cannoneer because the hunter has many Warrior cards, and Warrior has many great Rush tools that you can get from your card selections. If you acquire the Entrenchment treasure, which gives your minions two additional health, that makes the deck style even better. Inspire is good in Cannoneer because you can use your Hero Power multiple times in a turn to buff your minions.

Lord Godfrey is Darius Crowley’s nemesis and a potential final boss for him. Lord Godfrey’s deck has many Hunter cards and focuses on generating minions through Deathrattles and card effects. Positioning is key against Lord Godfrey since his Hero Power deals two damage to a minion and the minions next to it. Make sure you have cannons in between your minions so he can only hit one minion at a time.

There are many ways you can build your deck with the cards presented to you after each successful boss fight. Two of the more effective strategies include a Deathrattle deck and a Beast-style deck. Deathrattle is a great route to go because you already have some initial Deathrattle cards in your deck, and you can draft more with cards like Savannah Highmane and Kathrena Winterwisp. A Beast-style deck is effective because your Hero Power generates Beasts. Your strategy will be to buff your Beasts into powerful minions. Scavenging Hyena works great in this deck.

The nemesis boss for the Houndmaster is Glind Crowskin. Crowskin has a passive Hero Power that allows her to become Immune while she controls minions on the board. Your strategy is to clear those minions so that you can deal damage to her. This strategy fits into the Houndmaster’s playstyle because you are focused on board control with your Bloodhounds.

Toki, Time-Tinker is another hero available in this game mode. Her Hero Power allows you to basically restart your turn and have another try at it. Toki has many Mage cards and focuses more on spells than minions to win games. One of the best treasures for Toki is Double Time, which casts an additional copy of whatever spell you used first in a turn. Since the targets from the second cast are selected at random, you must be strategic in what spell you cast first in a turn.

Her Hero Power works great with cards that have RNG because you have another chance to get your play right. Cards like Primordial Glyph, Summoning Portal, and Firelands Portal are useful with the Time-Tinker. Using the Hero Power effectively is important. You may not want to use it every turn because while the outcome could be better, it could also be much, much worse. An entire run could come undone because of just one unlucky play.

The Time-Tinker’s nemesis is Infinite Toki—that’s right, you have to fight yourself to win sometimes. Like Time-Tinker, Infinite Toki has a similar focus on spells. Infinite Toki’s Hero Power will give a friendly minion Mega-Windfury, but that minion will die at the end of the turn. The one powerful card you’ll need to expect from Infinite Toki is Alternate Timeline, which starts the game over again—but you’ll be at the same health total.

Tracker has many Rogue cards, but whatever strategy you play can be heavily defined by the Treasures you get. For example, one Treasure you get reduces the cost of cards that didn’t start in your deck by one. You will want to draft cards like Burgle and Swashburglar to take advantage of this passive Treasure. Jade Shuriken is an incredibly strong card for Tracker since you can continually find copies of it through your Hero Power and gain increasingly strong Jades.

Take these tips into Monster Hunt and defeat all of the bosses that stand in your way. If you’re successful with each hero, only one enemy will remain—Hagatha the Witch awaits you at the end of the woods.