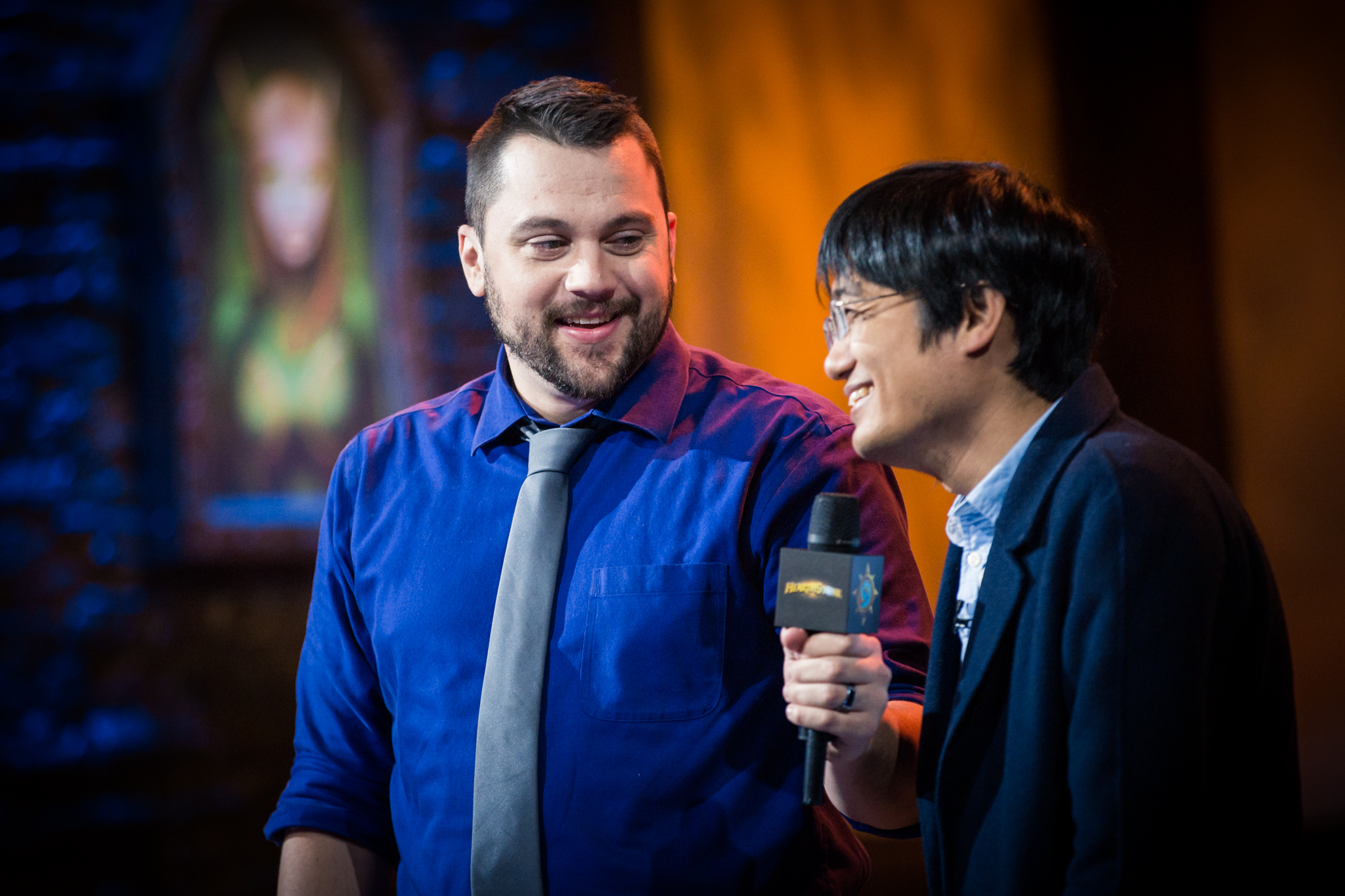 TJ Sanders occupies a unique position in Hearthstone esports—both as a popular caster, and a Blizzard esports employee.

For nearly a year now, Sanders has been working to develop the Hearthstone esports program. For 2018, that means an expanded Hearthstone Championship Tour, Tour Stops around the world, and his own pet project, the So You Think You Can Cast talent search.

Alongside this new role, he’s continued to be one of the community’s favorite casters, calling the last two Hearthstone World Championships.

The self-proclaimed “giant introvert” is now a pivotal figure within the community. Dot Esports spoke to TJ about managing his dual-mandate, the culture shock of joining Blizzard, and the importance of developing new broadcast talent for Hearthstone’s continued success.

How are you enjoying Sydney, how was the trip?

TJ: The jetlag is pretty easy to get over from the West Coast, I just got in yesterday. I think the players got in earlier. So most of the caters got in yesterday morning, so we skipped on the zoo and just hung out yesterday then went to a Fireside Gathering. It was packed which was pretty neat. We’ve only been here a day, but so far it’s been pretty nice.

How did you enjoy the Fireside Gathering?

Surprisingly, given my occupation, I’m a giant introvert. I don’t like social interaction very much. Fireside Gatherings are one of the few things that I enjoy because there’s always an ice breaker. There’s always things you can talk about even if you’re only talking about Hearthstone. That’s always pretty cool, and I think a lot of players share the same mindset as me. A lot of players are pretty introverted as well, and it’s cool to see their personalities come out when they’re in an environment where they can talk about the things they are passionate about.

How are you enjoying taking HCT around the world and traveling with the event?

Even in 2016 when we weren’t traveling too much for HCT, I didn’t live in LA at the time. So it was still a lot of travel to the studios when we just had them in LA. So I actually joined Blizzard because the travel was sort of getting too much. I wanted to travel a bit less and be able to spend more time at home with my wife, so now this year I am traveling to some tour stops—but since we have the Blizzard Arena this year and everything is more centralized, I can stay at the office for most of the year. It’s kind of nice to have that somewhat of a break from traveling than I did in previous years. I think this year finds a good balance, because casters can travel when they want to these tour stops. But they still have that home base for HCT.

How are you finding the balance of working for Blizzard and casting having made the jump?

It’s pretty eye opening to be honest. I didn’t realize when I joined the team just how much work has to go in on a day to day basis to keep everything running. We’re a growing team—I joined Blizzard a little less than a year ago and almost half the people who are on the team now joined after me. So we’re growing at a pretty astonishing rate, and we’re just now getting to the point where we feel comfortable with the amount of people we have on the team and being able to spread the workload enough to stay on top of things. Even things like tracking points and all the Tour Stop issues that we had, those things take work and time every day.

It’s been eye opening but really cool, because I’ve been sort of able to bridge the gap between the competitive scene, the talent, and Blizzard. Before me there wasn’t really that cohesiveness, there wasn’t that ambassador for the competitive scene at Blizzard. I have a lot of contacts, I can reach out to so many players and talent and influencers on a day to day basis and solicit feedback. All that stuff helps to shape the changes that we make, and I think that’s been a big help. It’s been a cool thing for me to see these things form and give justice back to the players who have invested so much time into the scene, and show them that we do care about their experience.

Does this event, and the World Championship, show once and for all that the APAC region is much stronger than people in the west give it credit for?

I think it might be just that it lacked the depth of talent in the past years. They’ve had a smaller amount of really really good players, but that skill gap has started to close. Of course when you have more great players, the chance of you having more players in these international events goes up. Now that the game has been out for a long time, I think the skill gap is shrinking across the regions. It’s always hard to compare regions back and forth, and it’s always hard to look at results from a World Championship and say APAC is the strongest region based on that, but it’s definitely much closer than it was. It was harder before for APAC to travel as well. The events they did have were few and far between. This year we already have Sydney right now, then Thailand, Japan, and Taiwan as well. Most countries are going to have a Tour Stop close to them.

So You Think You Can Cast, Blizzard’s casting talent search, was just announced as returning this year. How important is that program?

It’s huge. That’s one of the main things I’ve been doing toward the beginning of this year is trying to expand our talent pool and build up our existing talent. It’s been a real challenge. Right now we have a limited amount of talent for all of the things that are going on. Right now we have collegiate, the Wild program which is going on, we have all these Tour Stops that are happening and, on top of that, we have HCT and of course Global Games, which is starting later this year. There’s a lot of stuff that we need casters for.

To be honest, So You Think You Can Cast is actually coming a little bit late. There was a lot going on at the beginning of this year. I wanted to launch it earlier but we kind of just figured we had to do it. We have such a big need for casters, especially for some of the smaller events, especially collegiate. That’s a great place for newer casters to get experience, and it has a natural transition into casting the bigger events. It’s pretty crucial right now that we build Hearthstone talent, so that way Dan, Sottle, and Raven can actually have a break every once in a while from all the traveling, and we’re not just sending them to every Tour Stop.