Hello from exotic Greece. My name is Gromshz and I am here to present to you the deck that took me to Legend last Beta Season 4. Why bring a deck from last season – well, it’s great for reference and due to the emergence of Midrange/Control Hunters this season, it’s good to another perspective about non-face Hunters.

I have been playing card games for the majority of my life with a 3rd place ranking in the World Cup of Lord of the Rings card game and am currently the reigning champion of Greece at the “A Game of Thrones card game”.

The reason I chose to present this decks is the uniqueness of it. I thrive to make decks that are “out of the box”. I enjoy playing decks in low ranks that my opponent doesn’t know how to counter. Thus my Midrange Hunter was born.

The plan was simple. Hunter is best at dealing damage every turn and we want to keep that aspect. So many of the cards that go in the aggro version stayed in the deck.

Your Unleash combo is still there for card drawing (

Starving Buzzard) and the

Leeroy Jenkins finisher is still there. Your

Eaglehorn Bow is still there with the traps that go with it. But enough of that. Time to move on to the interesting part.

I wanted a deck that can outpace other rush decks and if that doesn’t happen, a deck that can withstand the early rush. Above all, I wanted to be able to stand a fair chance against the “enemies” of rush – Druid and Control Warrior.

As a Hunter the

Ironbeak Owl was already a must-have inclusion in the deck but in this deck it works wonders. When I had a perfect hand the game went something like this…

Ironbeak Owl and 4 damage face. I know that other classes do that combo (Druid, Handlock, Priests) but 4 damage from turn 2 from a class like Hunter that will follow up with more damage can swing the tempo majorly in your favor.

This made the deck a damage dealer like no other. So you can outpace other rush decks. But lets say that you don’t draw Owl; you still have the

Sunfury Protector that makes the Ancient Watcher stick and force your opponent to deal with it.

The deck took me to Legend fairly easy with its ability to crush Zoo and surprise all opponents. When your adversary sees a card like Ancient Watcher, his preconceptions of you being a Rush Hunter go out the window, making your play style much more unpredictable.

Keep the Board Clear

Although you can deal massive amounts of damage from turn 2 that doesn’t make you a rush deck. You absolutely have to keep the board clear. This said, you should make trades which means you are not always going for face.

You should only leave the opponent to gain board control when you want them to have it such as when you have the Starving Buzzard + Unleash combo in hand. It is difficult to know exactly when to do that but it is a crucial aspect of this deck.

When it is becoming obvious to your opponent that you want to fight for board control, he sees that as a threat and will try to wrestle it from you, forgetting that you are still a Hunter. Then you punish him by letting him take it and

Unleash the Hounds + Buzzard combo him.

The Starving Buzzard + Unleash combo is your main draw mechanic. Try to time it carefully. The deck lacks draw but it is primarily a mid/late game deck so you don’t need to draw your combos early. Therefore other cycle cards are not key in this archetype.

The confusion that this deck brings to your opponents is the key to victory. Be always ready to mix up your game.

As a rule of thumb always try to keep Ancient Watcher in hand and Ironbeak Owl/Sunfury Protector (depends on the opponent). Your bow is always important for your starting hand as well especially against other hunters.

Try to keep always in mind that a Sunfury Protector is a 2 mana 2/3 creature and it is a great opener on turn 2 against anyone so don’t be afraid of wasting the battlecry if you need a creature on the board.

Against Handlock you will probably need the Owls later on and you don’t have to race him. So don’t silence the Ancient Watcher. Try to make him a taunt minion but keep the Owls for the opponents taunts.

One of the easiest match ups. You have 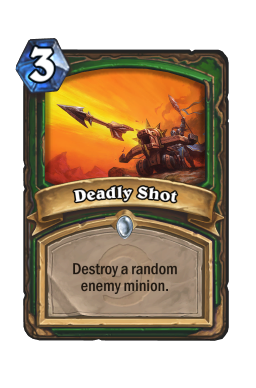 Deadly Shot and all the midrange tricks that can make his life difficult. Your

Savannah Highmane cannot be dealt with by him easily.

Watch out for your health as he can

Savage Roar Combo you for 14 with a seemingly empty board. Except for that though, this matchup is pretty straightforward. Don’t try to rush him. Damage his face when you can but try to keep board control a lot.

This matchup is pretty much a straight up race for face damage. You can outrace them! Believe it! It is one of the most difficult match ups for you but you can do it. Your weapon is crucial so keep it in opening hand.

Try to find your Ancient Watcher/Owl/Sunfury combo at the early game. Don’t hesitate to either use your Owl to silence his Leper Gnome or drop Sunfury Protector at turn 2 without using his ability.

As said above the Sunfury Protector is a 2/3 that can start dealing damage to his face early on. The more damage you can deal from early on, the better.

Easy matchup especially if your Ancient Watcher/Owl combo comes. Generally you can outpace him easily. Don’t hesitate here also to use your Owl to silence an early

Mana Wyrm drop from him.

Water Elemental. He can deal with your Savannah Highmane with a simple

Polymorph but play smart and don’t show him you are a mid range Hunter. Try to force him to use Polymorph on an

Animal Companion of yours or something else.

Again, an easy matchup. Go for face more than usual and try to bring your Savannah on the board. They will have a hard time dealing with it.

For Control Paladins keep an Owl in hand for his

Tirion Fordring and there won’t be other problems.

The rush version is trickier if he starts well but your

Explosive Trap + Unleash the Hounds combo should halt him.

An easy matchup. Although they can heal with their ability, it means they will be using 2 mana and not bringing threats to the board. When they do bring minions down, your Unleash combo will punish them.

They have means to destroy your late game threats so don’t rely on them. They will usually mistake you for rush (won’t they all?) so they will focus on healing to negate your hero ability.

That will work in your favor and you will have board control until turn 10 when you should watch out for Mind Control. When they decide to take board control it will be fine for you and your Unleash combo.

It is your best matchup. Face roll them and try to make them lose their

Eviscerate on a simple Ancient Watcher. They will ignore him at the start but you will make them realise that he is a threat either by taunting him or silencing him.

If it is a Fair Rogue the matchup becomes all that easier. He simply can’t outrace you in damage. If it is a Miracle Rogue he will think you are a Rush Hunter and he will make strange plays just to put you in a situation that you will have to deal with a big

Edwin VanCleef. Freezing Trap and Deadly Shot are your tools against this. You can even try the Owl solution on him. Try to maximize your damage on him because trust me he will absolutely try to find his

Gadgetzan Auctioneer combo. He will try to out-damage you.

I believe this is the next best matchup after rogue. They want a lot of minions on the board late game and so do you. They know they will fall for the Buzzard + Unleash combo and you will not disappoint them.

The can’t heal at all so you can go for face most times in the start and let them gain board control.

This is one more matchup that your Savannah will be useless if you don’t convince them from early on that you a Rush Hunter. But if you do and they

Hex the wrong minion, you can punish him later on.

Against Zoo the deck will show its teeth and win before they can breathe. Think about it. Rush hunter counters Zoo with the 2 damage [Explosive Trap and the Unleash combo. You have that and above that you have Ancient Watchers that either will hit for 4 or they will be beside a Sunfury Protector from early on.

Against Handlock it is really a coinflip. You have to burst them hard and be careful not to let yourself be caught in a double Molten Giant taunt scenario, even though you have 2 owls and 1

Hunters Mark, making you more able than any normal hunter to survive this scenario.

Your Freezing Traps can work wonders too. To counter this, try not to lower the opponent’s health to a point where they can play their Molten Giants unless you have an answer to it.

Control Warrior is by far this deck’s hardest matchup. However, you have the means to win far more games than Rush Hunter can. You have a great late game with Savannah Highmane and you have Deadly Shot and Freezing Traps for their other threats.

Stay focussed and deal with their minions; don’t go all out face at any cost. There will be times that you will have to use only your hero ability and leave a lot of mana unused which is fine. This a Control Vs Control matchup and you cannot win by going all out face.

Deal with their threats as they enter the board. Silence their

Armorsmith or kill it by all means. Silence their

Acolyte of Pain to prevent card disadvantage. Use Freezing Trap well and keep Deadly Shot for a late

Usually the turn they spend 8 mana for Ragnaros is the turn that you have all your pieces collected and kill him.

The Rush Warrior is an easy matchup. Your Ancient Watchers block him from the very start and they cannot race you on even terms. You are the control deck in this matchup and you should act like it.

When your Savannah enters the board they will either be out of options or at the very best for them they will exhaust all their options when they deal with it.

Hearthstone Players is looking for writers/editors to share their knowledge on the site! We get 20,000 daily unique visitors each day, all looking for the latest decklists and strategies!