After the extensive article about Thrall, the Shaman Hero, it’s now time to have a look at the hero’s most notable cards. With very few exceptions, most of these cover either spells from the World of Warcraft class, or important figures in its overall lore.

While the World of Warcraft shaman covers a trinity of roles – melee combatant, ranged caster, or healer – his Hearthstone counterpart tends to skew more towards the caster aspect, with strong spells, some of which can damage a single target, while others strike multiple enemies at once.

Regardless of the specialization, the shaman theme was always about either using the power of the elements, or being empowered by them, something that is reflected  in most cards presented here. Some, but not all, as is the case with the very first card…

While I’ve made reference to bloodlust in the previous article, it’s worth mentioning again for a couple of reasons.

Bloodlust was, up until World of Warcraft’s first expansion, “The Burning Crusade”, a spell exclusive to the Horde faction – as they were the only ones to have access to the Shaman class – and that turned out to be a big point of contention between players.

Bloodlust was so powerful that it most definitely gave an edge when facing the enormous cooperative challenges that were presented by World of Warcraft’s end-game content. Those were raids that required 40 maximum level characters to complete, working in tandem for several hours in an effort to defeat the game’s most powerful bosses and secure the best loot and bragging rights that they awarded.

Bloodlust had a similar effect in World of Warcraft to the one it has in Hearthstone – a massive boost to the power of all the players within range – and as such, Shaman players found themselves to be key pieces in several strategies. Meanwhile, this meant that Horde groups were usually the first ones to beat the bosses and earn both bragging rights and loot that would give them further edge in coming fights and when competing directly against Alliance players.

This simple spell snowballed into a big advantage for the Horde faction, and many still think that it was the main reason for “shoving” shamanist into the lore of the Alliance’s Draenei race once “The Burning Crusade” hit, allowing the alliance players to have their own, sanitized version of Bloodlust, dubbed “Heroism”.

Nowadays, the disparity between the factions is a thing of the past, and even Shamans are not longer obligatory to have in the group exclusively because of it, as the mage class now has their own version of the spell, dubbed “Time Warp”.

It is, however, still a crucial spell in many end-game encounters, and most guides for that kind of content make a point of defining the exact moment for when to cast Bloodlust / Heroism, so as to achieve maximum effect.

While it is debatable which one is more satisfactory, turning your opponent into a sheep, or into a frog, it is certain that hex was, for a long time, one of the best “crowd control” spells in World of Warcraft, normally on par with polymorph.

Especially powerful (and annoying ) in Player versus Player combat, it was one more subtle edge conferred to the Horde over the alliance, as the shaman’s counterpart, the paladin, could only crowd-control using repentance. Unlike the Hearthstone card, that makes a minion with big defense become squishy, the World of Warcraft version of the paladin spell actually stunned an opponent, but could only be used against humanoids or dragonkin.

So while not unbalanced on competitive matches as was the case with bloodlust, because all opponents were by definition humanoid,  hex still gave the shaman an edge over the paladin when it came to crowd-controlling on single-player scenarios. 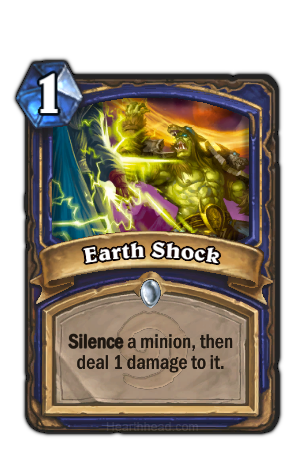 Shocks have always been an important part of the Shaman class, a category of their own: small utility spells that mixed damage with a debilitating effect. While the most famous is certainly frost-shock, mostly due to it being popularized on a video mocking both the Alliance and its paladins, and the old “switcher” Apple commercials, the shock spell that saw the most use both in World of Warcraft and Hearthstone was earth-shock.

Sadly, while the WoW spell was once exactly the same as today’s Hearthstone spell, the silence effect has been removed from it long ago. The Warcraft’s shaman favorite shock is currently the Flame Shock, still not represented in Hearthstone.

Dubbed “Reincarnation” in World of Warcraft, its effect is quite different: World of Warcraft shamen can actually reincarnate upon death – a fact that, put together with his usual “savior” status, has seen some players award Thrall the nickname “Green Jesus”, either endearingly or mockingly, depending on who you ask.

A proper version of the original World of Warcraft spell could actually form the basis for the first Shaman secret, a spell that would work in a similar way to the Mage’s ice-block, restoring an amount of the shaman’s health on fatal damage.

Alas, while that kind of spell may still come into being, it is unlikely that it will have a name so similar to that of an already existing card. 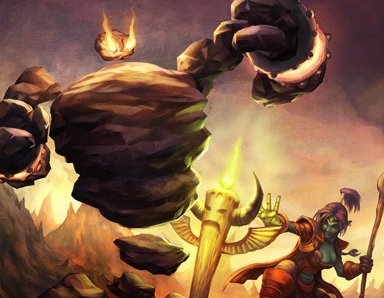 While in World of Warcraft both elementals are summoned by dropping a specialty totem, and they can never be summoned at the same time, in Hearthstone both fire-elemental and earth-elemental are their own card and as such, much more flexible and useful.

They are actually a great representation of their World of Warcraft counterparts in every other manner, though. The Earth Elemental is usually a big taunting minion that protects his or her master in WoW for a short period of time, while the Fire Elemental is used as an offensive, burst-damage source.

They are a staple of the shaman arsenal, always brought out whenever the shaman is in trouble or wants to contribute with extra offensive power.

While Blizzard has vowed to revamp the often clumsy and unintuitive game mechanics that characterize the World of Warcraft’s shaman totem usage, it’s undeniable that Totems have become an integral part of the classes’ identity.

The WoW shaman has an enormous variety of totems at her disposal, covering a wide range of effects, from healing to damage to buffing, but Hearthstone developers have picked the best of the best, and integrated them with valuable game mechanics.

The flametongue-totem was used by a World of Warcraft shaman to increase the attack power of melee players and the spell power of casters, up until it was removed in the Mists of Pandaria expansion. While not a perfect analogue, mostly due to Hearthstone’s version of spell power affecting the player and not the minions, it is good to see that the classic totem lives on in some form.

In the meantime, mana-tide-totem’s WoW counterpart is one of the most effective ways to help players recover mana, and as such, the Hearthstone card is one more in the growing pool of cards where the mechanical translation for mana in World of Warcraft becomes cards / card draw in Hearthstone, the only exception so far being the Druid class.

This one is a weird translation. Blizzard itself doesn’t seem to have any reason for the feral-spirit spell to exist as far as lore is concerned, and I guess it mostly exists because it is cool.

Story-wise, its origin comes from the tale passed for generations among the orcish Frostwolf tribe – Thrall’s family – that every Frostwolf has his own wolf companion, and the most powerful shaman, the most attuned with the natural spirits, and those blessed by the most loyal companions, will see their spirit wolf return as their guardian, after death.

Obviously this happened to Thrall’s animal companion – he is Thrall, after all – but there has never been a suitable explanation or connection as to why any shaman – frostwolf or not – can summon a pair of spirit wolves at will.

Regardless, it is with no doubt a powerful spell in both World of Warcraft and Hearthstone, with the WoW version taking the edge, as damage dealt by the wolves is turned into health for the shaman.

Yeah, shamen have it pretty good.

One of the Elemental Lords of Azeroth – the others being Therazane the Stonemother, neptulon the Tidehunter, and of course, the fan favorite, Mr. “BY FIRE BE PURGED” ragnaros-the-firelord – alakir-the-windlord is often an under-appreciated card.

The elemental lords were once lieutenants of the Old Gods, helping them maintain their dominion over the primordial world that would later be shaped into Azeroth by the hands of the Titans.

Once the Titans were done releasing Azeroth from the Old Gods’ grasp, they banished the elemental lords into the elemental planes, where they were doomed to forever wage war on each other.

But the lords were always on the lookout for a way to return to their old world, and after ragnaros-the-firelord failed in his first attempt, they ended up making a pact with the dreaded deathwing. It was the machinations of the black dragon himself that eventually allowed Al’Akir to return to the surface and set up his domain in southern Kalimdor.

Early in Hearthstone’s life-cycle, he was the go-to shaman finisher, but the Windlord has since fallen from grace somewhat.

Still, he gets a lot more respect in Hearthstone than he ever got in World of Warcraft, where he was widely considered to be the weakest of the elemental lords – an insult that is forever engraved on the card’s flavor text – and served merely as the final boss of a quickly forgotten raid dungeon.

The Shaman offers Blizzard both some unique opportunities and challenges towards future development.

For one thing, the class suffers from a lack of iconic characters and companions, which is why two of his legendaries are not shamen but elemental lords, and most people will struggle to recall the-mistcaller from World of Warcraft lore.

On the other hand, the elemental theme is rich and there are many totems and spells that have yet to be translated into Hearthstone.

It would be especially interesting to see more cards that take on WoW’s “Enhancement Shaman” theme of using elements to increase the shaman’s power, making it more of a “use face to hit stuff” hero. Currently rockbiter-weapon is the only evidence of that particular wave of shamanism in Hearthstone.

For now, a curious remark: aside from the Paladin, the Shaman is the only one currently receiving “murloc synergy” cards. One can but wonder if the developer doesn’t intend to bring back some of the old rivalry between the two classes as both become the go-to resource for future murloc decks.

What do you think the future holds? Let us know in the comments!