Hello and welcome to yet another Flavor Text and Lore article. Stay a while… And read about the story and lore behind the Rogue Hero’s most notable cards.

The Rogue is a very technical class both in Hearthstone and World of Warcraft, and is also, usually, a lone wolf – so the class doesn’t have a very big emphasis on minions. Instead, they rely on cunning and diverse combat techniques, some of which are quite famous.

The Way of the Assassin

While most of World of Warcraft’s rogue assassination abilities don’t see much play in Hearthstone, some of the abilities available to all rogues have a flavor that’s distinctly in line with historical assassination techniques. Cards such as deadly-poison tune into assassin mythology from many cultures, and this card in particular works in a very similar manner to its WoW ability counterpart, an ability that temporarily allows for a chance that the rogue’s affected weapons deal extra damage to her enemy.

And of course, a great assassin needs a great weapon (well, rare, in this case) and such is the case with perditions-blade. More than a highly coveted drop in classic World of Warcraft’s first raid, Molten Core – where it dropped from the legendary last boss ragnaros-the-firelord – this card’s combo ability mimics the original weapon’s functionality to a tee, as this one had the chance to deal a blast of fire damage upon attacking.

Rogues are also fierce combatants, able to stand their own against waves of opponents. In fact, in present-day World of Warcraft,  a rogue’s area-of-effect abilities are some of their most prized assets.

Their fan-of-knives was originally available to all rogue specializations, and allowed the World of Warcraft rogue, much like in Hearthstone, to not only damage all the enemies in her range, but also generate valuable combo points.

Recently, the more combat-oriented rogue specialization lost the use of this spell but was rewarded with an improved version of their exclusive blade-flurry. This ability is, however, quite different across both games, as the World of Warcraft version simply allows the rogue’s attacks to hit all enemies in range, with no weapon-based drawback.

As noted in the previous Flavor Text and Lore, the origins of the rogue see it as a class based in stealth, avoidance and opportunism, and although more focused in combat, the World of Warcraft rogue still maintains a whole set of abilities that are in tune with this heritage. And quite a bit of those made a cut into the Hearthstone Hero’s repertoire, arguably contributing for much of its unique play style.

backstab is the rogue classic, accompanying the class since its debut way back in the Advanced Dungeons & Dragons tabletop RPG. In World of Warcraft, as in there, it allows the rogue to deal massive, crippling damage – so long as the opponent has his back turned to her (duh!). Understandably, this is harder to represent in a card game, so the designers had to settle for damaging an undamaged minion.

Of course, in World of Warcraft, it gets much more convenient when you can simply use shadowstep to get instantly behind an opponent. Once again, the mechanic proved hard to translate to Hearthstone – though arguably the Hearthstone’s card effect is much more powerful, providing the player with an opportunity to save and reuse a valuable minion.

And there are few things more satisfying than using sap to incapacitate an opponent for up to a full minute during a team Player VS Player match, instantly creating numeric superiority over the enemy team. Many World of Warcraft PvP contests were won or lost over the years due to judicious use of this ability – an ability that more often than not proves to be similarly game changing in Hearthstone matches.

Stealth also needs to play a part into any exploration of the Rogue class, and in both Hearthstone and World of Warcraft, vanish deserves mention. While it’s sad that the Hearthstone Hero can’t, as of yet, be stealthed, the card is possibly much more useful than its World of Warcraft counterpart, as it protects valuable minions, saving them for combo-induced goodness in the next turn.

Finally, sprint deserves mention. Currently almost all World of Warcraft classes have access to some kind of mobility helper or speed boost ability, but back in the days of Classic / Vanilla WoW, this wasn’t the case, and the rogue’s superior mobility in the battlefield was frequently envied. Or even just the sheer convenience of increased speed while running errands in the main city, between the bank and the action house.

Not to be outdone by the British government and their MI:6 secret services, king varian-wrynn and lord bolvar-fordragon enticed rogues from all walks of life to serve their country (and line their pockets) by forming Stormwind Intelligence, Section 7, World of Warcraft’s foremost source of James Bond parody. 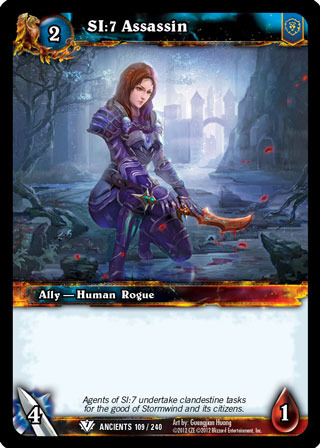 SI:7 is quite possibly the most active organization in World of Warcraft’s Alliance story-line, often providing the start for questlines and plot exposition, as well as the odd, quirky gadget for one-time use. SI:7 liaisons are present at every major Alliance base in enemy territory and often in the field. Indeed, they are so prolific that it’s odd that si7-agent is their single representative in Hearthstone.

In fact, it can be easily speculated that SI:7 could be the theme for a future Hearthstone Adventure in the vein of The League of Explorers. Who wouldn’t like a globe-trotting (assuming Azeroth is round) spy-themed adventure?

The Defias Brotherhood was, for many early World of Warcraft players, the first truly coherent opposing force to be found in their adventures. They featured prominently in the plot line followed by human characters past their initial starting zone in Elwynn Forest and into the drier plains of Westfall. In those days, defias-ringleader and their lackeys defias-bandit died by the dozen under the blades of experience-eager players.

A band of cutthroats and thieves that roamed the farmlands, stealing from the poor farmers that were already beleaguered by the elements and wild beasts, their criminal actions were mostly covering their plotting against the royal line of Stormwind.

For most of the Brotherhood had at one point been stonemasons, tasked with rebuilding the great human city after the retreat of the conquering Horde following the Second War, portrayed in Warcraft II.

That endeavor had been sponsored by the former Stormwind nobility – but in the shadows, the Black Dragonflight matriarch onyxia, disguised as the royal adviser Lady Katrana Prestor, had secretly convinced the stonemasons to overcharge, while at the same time talking the nobles into refusing to pay. In this way, she manipulated both factions into civil unrest, all the while using her charm and magic to keep the king varian-wrynn oblivious.

Eventually, the Defias Brotherhood had a hand in kidnapping king varian-wrynn as he was on his way to attend a diplomatic meeting with the Horde leaders in Theramore. But this plot line was unceremoniously dropped from the main game once The Burning Crusade expansion hit,  only being eventually re-opened for the World of Warcraft comic series.

What players did have was a nearly epic conclusion to the early Westfall plot line, where they stormed the famous dungeon Deadmines, an underground area that had debuted way back in the first Warcraft’s main campaign, and was now settled by the Brotherhood as their main base of operations.

It was a huge, pirate-themed (and drawing some inspiration from Disney’s infamous Pirates of the Caribbean ride) dungeon that culminated in a fight atop a moored pirate ship, against the master of the Brotherhood himself, edwin-vancleef – who had previously led the stonemasons during their reconstruction of Stormwind.

The legacy of the Deadmines lived on for many years, having been remade by the time the Cataclysm expansion was launched, this time featuring VanCleef’s daughter Vanessa as the main antagonist. So don’t be surprised to see Vanessa VanCleef as a future Rogue Legendary.

This concludes our brief trip into the origins and lore of the Rogue Hero’s most notable cards. If you feel I left something out, please let me know in the comments!

Or comment just to let me know if you’ve ever played a Rogue outside of Hearthstone, as I think they are pretty awesome.