Hello and welcome to yet another Flavor Text and Lore article. Stay a while… And read about the story and lore behind some of Hearthstone’s most notable Legendary cards.

This article is devoted to exploring the game and lore background behind some of the most  loved and hated neutral legendary cards. Most of these are Classic cards, and aren’t usually played outside of arena, though they were once viable for constructed.

Over the course of several games and expansions, the Warcraft universe has produced a veritable army of fan-favorite characters, some who have only reemerged since their original debut to make an appearance now, in Hearthstone.

Many Hearthstone Legendary foes are simply named enemies that are a bit tougher to kill than their minions, but have little else behind them in terms of story or background. This is the case with legendaries like 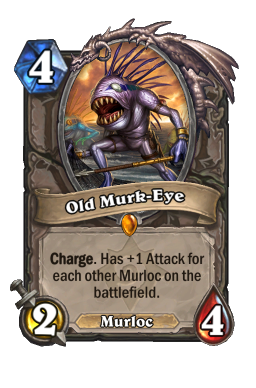 old-murk-eye, and even the dungeon boss

bloodmage-thalnos. But some have a bit more content behind them.

So without further ado, let’s start with…

The Doctor is… BOOM!

It’s fair to say that Goblins have a thing for explosives and explosions.

Even as far back as classic World of Warcraft, masters of the engineering profession were at one point given the choice of joining two mutually exclusive clubs – the school of Gnome Engineering or the Guild of Goblin Engineers. If you wanted to make things blow up, the later was the one for you.

Both in name and mechanics,

dr-boom pays tribute to these core principles of the school of Goblin Engineering.

Of course, his name is also a reference to the megalomaniac classic villain from the “Fantastic Four” Marvel comic books, Dr. Doom, who often used “Doombots” to do his evil bidding. Boom’s Hearthstone card art was even modified from the original key art, adding a green cowl like the one the Marvel comics nemesis uses, to increase their resemblance.

Apart from his satirical origins,

dr-boom could be found in the Burning Crusade World of Warcraft expansion, more specifically in a world apart from Azeroth, the inter-dimensional wastes of Outland, all that remained of the orc homeworld of Draenor after the march of the Burning Legion.

Once an apprentice in the Goblin town of Area 52, located in the zone known as Netherstorm,

dr-boom set out on his own, establishing his base of operations close to the town and terrorizing it ever since.

He was originally nothing more than a low-tier boss for the players to beat in a simple quest, but with a twist – the players were not supposed to kill him in a traditional sense. Instead, they had to approach him, dodging his explosive Boombots, until they were close enough to throw their own bombs at him.

This kind of quest mechanics made him stationary, and eventually, destined him to become a punching bag. For a long time – until Blizzard fixed him – enterprising players found a way to approach him from the mountains behind, from where they would use him to level up their ranged attacks from repetition, or simply test their spells’ damage output.

dr-boom was coded to die from the quest bombs and not regular attacks, he was stuck as an eternal punching bag.

So I guess Blizzard made him into such a strong Hearthstone card as a bit of an apology. Now he can have his revenge by wreaking havoc and frustrating players in the Hearthstone board.

nat-pagle has fallen on some hard Hearthstone times, not seeing much play at all ever since the first expansion was launched and the card pool increased in quality. But he is still a major side-character in Warcraft lore, and one of the most intriguing ones.

In his early age, he lived in the shore-side village of Hillsbrad Foothills, part of the Kingdom of Lordaeron.

If players use the magical portal in the Bronze Dragonflight’s Caverns of Time to travel back to an early age prior to the events of Warcraft III and the Third War, they can find him  fishing, while talking with his fishing buddy about his dreams – his real dreams, the ones he had while sleeping.

It turns out that Pagle’s dreams have predicted most major Warcraft events, including the Legion’s defeat in Kalimdor, Prince Arthas’ transformation into the Lich King, and his own status as a master fisherman, to whom fishermen from all over the world come to learn with and pay tribute. This has even led some players to speculate that all of World of Warcraft happens in Pagle’s dreams, him being some dreamer-God of some kind.

Back in the present, Pagle could be originally be found fishing in a cove near Theramore City, the Mage Hero Jaina Proudmoore’s abode. There, he would receive player’s from all over the world, offering them quests that they would have to accomplish, so that he would train them into increased fishing skill… So yeah, there’s that.

He views his own status as a master fisherman with a certain humility, almost bordering on jadedness. In his own words:

“I reckon people are driven to do what they do for different reasons.”

“Now, I’m not saying you need to fish for 30 years or catch every fish in the sea to become a master fisherman. I reckon you just need to be determined – determined enough to sit on your duff for hours at a time, doin’ nothin’.”

One has to wonder if this hasn’t come from him having seen all his dreams come true, a theory further supported by his other remark:

“If you ask me, the best part about fishing is its slow pace. It gives one time to think, to reflect on past events and to plan for future ones. Oh, and it’s also a great excuse to drink. Heavily.”

Later, by the “Mists of Pandaria” expansion,

nat-pagle apparently shook off some of that jadedness, as he moved to pandaria and started his own fishing faction, The Anglers. The peaceful, calm and laid-back culture of the Pandaren proved a fair home for the art of fishing, and players kept approaching him for guidance and rewards from particularly great fishing feats.

nat-pagle can be found fishing in the primal waters of Draenor, having traveled to the doomed world’s past like many of Azeroth’s finest. He can be befriended and recruited to fish in a player’s garrison, provided, as ever, that the player proves his or her fishing prowess.

He hasn’t talked much about any dreams, lately.

The Scourge of Elwynn

Yet another card that in the early days of Hearthstone I would meet every now and then in constructed, now 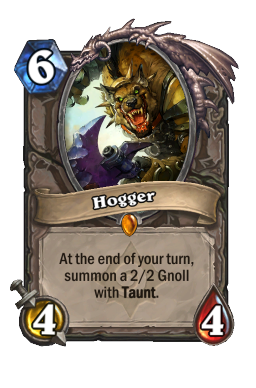 hogger is a nice Arena companion and little else. In World of Warcraft, though, and especially among the oldest players, this gnoll is Legend.

He was, effectively, the “final boss” of the Human starting area of Elwynn Forest. An elite-class enemy, it was very hard for a player of approximate level to take him out alone – and especially hard due to him being surrounded by other, lesser gnolls.

To a novice player, it would seem that gnolls would keep joining the fight, but even when alone, he often proved an insurmountable challenge. Enough that a quick internet search for his name at the time would turn in “strategy guides”.

Ultimately, he is a rather weak opponent, and so Hogger became an inside joke between veteran players, who, when questioned about the difficulty of a quest of an end-game boss, would reply something along the lines of “almost as hard as Hogger” or some variation.

Hogger’s popularity didn’t go unnoticed by Blizzard, who, when remaking the starting areas for the Cataclysm expansion, gave him a further boost, finally granting him, among other things, the ability to summon gnoll allies during the fight, living up to his legend.

In a twist, the new Hogger is not killed by the players, but captured and delivered to the Stormwind authorities, making him later a much more powerful foe during an assault on the Stormwind dungeons, know as The Stockade, where he must be faced by a team of at least five players of appropriate level.

The Legend of Leeroy

There are not a lot of examples of actual players making it into the book of Warcraft legend, but

leeroy-jenkins (née Ben Schulz) managed to do it.

The video below is a cleaned-up version of the original from over nine years ago, where it shows the Paladin’s team trying to plan for a notoriously difficult section of the Upper Blackrock Spire raid dungeon that they could avoid if not for Leeroy needing a piece of gear from a certain boss.

After a couple of minutes of planning, Leeroy – who had been away from keyboard all the time – suddenly gets up and, screaming his name as a battle cry, runs toward the hordes of enemies, destroying any attempt at a coordinated effort, and drawing countless whelps towards the party.

When confronted by his friends at the end, as being “stupid as hell”, he famously replies: “Oh well. At least I have chicken.”

Today, the video looks very quaint – any veteran how player can see that the “planning” stage is either clueless or, more probably, satirical. While none of the involved have ever confirmed or denied it, it’s possible at at least part of the video was staged.

But it is worth remembering that all those years ago, the Internet was still young, and this kind of thing was still novel. People weren’t nearly as jaded or scrutinizing as they are now, and this early innocence no doubt played a big part in stoking the fires of Leeroy’s fame.

leeroy-jenkins is usually referred as a “valordin” in a derogatory fashion, because he uses pieces of the original Warrior Dungeon set “Valor”.

In World of Warcraft’s early days, there was no such thing as adaptable gear, so although Paladins could in theory be either tanks, damage-dealers, or healers, the set of armor that they could acquire in the game’s many dungeons – the Lightforge set – was mostly focused on healing. As at that time the armour sets weren’t locked to specific classes, the Warrior damage-focused Valor set was a viable alternative for paladins.

But these sets were so hard to come by, sometimes requiring dozens of attempts on dungeons that could take the better part of an evening to complete, that most Warriors were extremely annoyed at the possibility of Paladins wanting the same items as they, and often gave paladins the evil eye for it.

Later, Leeroy’s popularity saw a further boost, as he was announced as a card in World of Warcraft’s original Trading Card Game, with art especially drawn by Mike Krahulik, from the incredibly famous Penny Arcade online comic strip. And he even got his own collectible figure. An especial title was also awarded in game to players would could (successfully) replicate Leeroy’s mad charge in Upper Blackrock Spire.

Recently, Blizzard paid Leeroy his greatest homage yet. Upon returning to the newly revised Blackrock Spire dungeon, remade for the Warlords of Draenor expansion, players get a chance to revive his broken body, and – while waiting for him to finish roasting his chicken – help him finally get the item he’s been wanting for the past 10 years.

Upon success, Leeroy pledges his loyalty to the player, joining him or her as an henchman.

But what of the real-life Leeroy? Sadly, it is reported that Ben Schultz deleted his famous character, and vanished back into obscurity – if he was either tired of the fame, or of the game itself, one never knows.

And that’s it for one more trip into the Lore of Warcraft and Hearthstone. As always, please leave your comments and suggestions below – and thank you for all your kind words in previous comments, and for sharing the articles.

Stay tuned – the Adventures are next.