You’ve seen it happen before. The battle lines are drawn. He just dropped his last card, another mid-sized minion. He has the board advantage. You have one last card in hand. He trades so you can’t push for lethal next turn, then goes face, expecting to steady-shot over your remaining health after you pass.

You’re fine, though. Barring divine intervention from the gods of top decking, you got this. You make your trades, keeping enough minions to go lethal on next turn, and play the card you’ve been holding on to.

It doesn’t matter what minion gets the divine shield / taunt buff from your coghammer. It’s enough to prevent lethal, something your opponent confirms with the – enraged, you think as you smile to yourself – shattering of his hero portrait after drawing his next card.

The Light brings yet another last-turn reversal. This is what playing a Paladin is all about. Isn’t  it?

The Birth of the Lightbringer

Warcraft’s Paladin class was born following the story of the first game, the real-time strategy “Warcraft: Orcs and Humans”, in which the orcish Horde laid siege to, and eventually destroyed, the human kingdom of Stormwind.

As Bishop Alonsus Faol, one of the fallen kingdom’s heroes, took refuge in the northern kingdom of Lordaeron, he saw the need for the Church of the Light to have a more militant arm, one capable of leading the charge against the Horde.

He started training knights in the ways of the holy-light, and clerics in the arts of warfare, and the Order of the Silver Hand was born. The first among them was his long-time apprentice, Uther.

The Tides of War

Thus, Paladins were introduced in Warcraft II, starting the tradition of a class that provides solid support to other units on the field, and the ability to turn the tide of the battle with key plays – the most powerful of which being the powerful “Resurrection” spell, later rechristened  “redemption” in World of Warcraft and Hearthstone. The spell that came to be the defining characteristic of the class, however, was Divine Shield, granting Uther and his fellow Paladins temporary invincibility.

If we are splitting straws, we can say that the WoW spell “Hand of Protection” doesn’t really give an ally a Divine Shield… But close enough.

Throughout Warcraft II’s narrative, Uther is portrayed as a hero skilled in rallying and inspiring troops, bringing them to victory over insurmountable odds, eventually earning the title “The Lightbringer” from his brother-in-arms Turalyon after the rout of the Horde at Blackrock Mountain. It is interesting to note that, even though it was originally Turalyon that turned the tide of that decisive battle, Blizzard’s more recent lore sources tend to downplay his role and emphasize Uther’s, perhaps in an attempt to further canonize him as the personification of the Paladin hero. 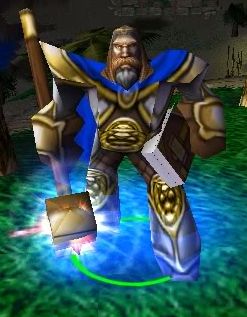 Pictured above, the original Uther model from Warcraft III – clearly reminiscent of his current incarnations in Hearthstone and Heroes of the Storm.

Uther played a big part in the shaping of Warcraft lore thereafter, becoming the de facto “father of Paladins”, initiating and mentoring other Paladins – and so his hero power in Hearthstone is a perfect fit.

Uther also played a pivotal role in Warcraft III, initially acting as a mentor to prince Arthas, and eventually as his foil as the prince began his descent into madness. Arthas ended up murdering his friend and mentor, going on to become one of the most iconic villains of Warcraft history, and nearly shattering forever the Order of the Silver Hand.

The Uther we see in Hearthstone, then, most closely resembles the Uther from Warcraft III, even though most of his hero cards are inspired or based on his legacy – spells, abilities and characters  associated with the Paladin class in World of Warcraft.

If you’ve ever wondered why the Hearthstone character select screen describes Uther as “The best-selling author of The Light and How to Swing It”, it is because that was the title of a rare book that World of Warcraft Paladin players needed to find in order to get a powerful piece of gear.

Light’s Justice was, at the time of WoW’s first expansion pack, one of the most coveted Paladin weapons. And it remains prized for its perfect fit to the “Paladin look”.

“Buffing” your minions, arguably one of the areas where Paladin hero cards excel, can be traced back to the early years of WoW, when one of the most widely acknowledged strengths of the class was the assortment of powerful spells they could cast on their allies, strengthening their abilities – to a point where early Paladins came to resent being viewed as an “utility” class.

As hinted above, however, no ability is more characteristic of the Paladin than the Divine Shield. And it is probably reason for no small amount of mirth in Blizzard HQ, that the Divine Shield ended up becoming such a valuable trait in Hearthstone cards.

Why? Early Paladin WoW players became infamous for casting the spell and using its invulnerability window to activate their Hearthstones, spiriting themselves to a friendly inn, and away from attacking Horde players seeking to kill them. “Bubblehearthing” became a cry of rage from the Horde.

Uther himself is not entirely gone, either. Every year, during a short, seasonal event, WoW players get the chance to visit his tomb, far into the inhospitable lands where his pupil betrayed him, to pay their respects – and catch a glimpse of his spirit.

The Future of the Paladin Hero

Author’s note: this section was written back in October 2015, months ahead of Blizzard announcing Lady Liadrin as the Paladin Alternate Hero. The text was kept unchanged since then because it still has a relevant amount of lore. Also, it proves that I totally called it.

Hearthstone ended up being perhaps Blizzard’s finest representation of the Paladin hero, casting him as a leader figure, protecting and boosting his minions, while still able to wade into the battlefield, striking key targets.

In the Warcraft strategy games – and indeed, at some points during WoW’s long life – the Paladin often felt like a jack of all trades and a master of none, but in Hearthstone, he shines as a versatile hero, and I will leave the discussions of what tweaks could be done to the class to more experienced, higher-level players.

What comes to mind, then, is who could “succeed” Uther as the “new” Paladin hero. Just as Magni became the premium option for Warrior players, and Alleria replaced Rexxar, who could be the foil for Uther?

The other better-know Paladin in Warcraft lore, tirion-fordring, is already a card himself, so that seems unlikely. And while one answer could be the lesser-known Turalyon (himself Alleria’s lover), it doesn’t seem to fit. On one hand, as mentioned before, Blizzard seems intent on downplaying him next to Uther (even though it has been mentioned that the next WoW expansion will touch on his story). On the other hand, he is also an Alliance character.

If we think that Garrosh (Horde) can be switched with Magni (Alliance), the same being true between Rexxar and Alleria, (and Medivh, while human, was the one originally responsible for the coming of the orcish Horde into the world), then we can deduce Uther’s future alternate to be an horde character. 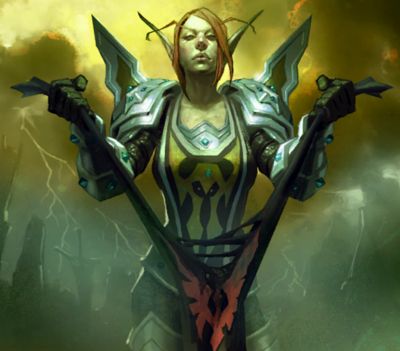 Pictured above, the shattered-sun-cleric key art pictures the historical moment when Lady Liadrin removes the blood-knight tabard, taking up the colors of the Shattered Sun Offensive – a pivotal moment in WoW lore, marking the start of the Blood Elven redemption.

For a long time – throughout all the strategy titles and up to WoW’s first expansion pack – Paladins were exclusive to the Alliance, but eventually the Horde-loyal Blood Elves became able to wield the Holy Light as well – first through trickery, and later, through redemption. Lady Liadrin was the first among them.

She has since then been featured on key World of Warcraft narratives, and, unlike Uther, her story is still being written.

Will Liadrin be the next face you meet over the board?

Inspired? You can play the Paladin leader that masters warfare by carefully managing the board and supporting his minions as Midrange Paladin – or be the one that uses his light-given powers to turn the tide in an instant with Secret Paladin. You can even choose to charge gloriously into battle with the (sadly now less common) Aggro Paladin!

Which will you choose?