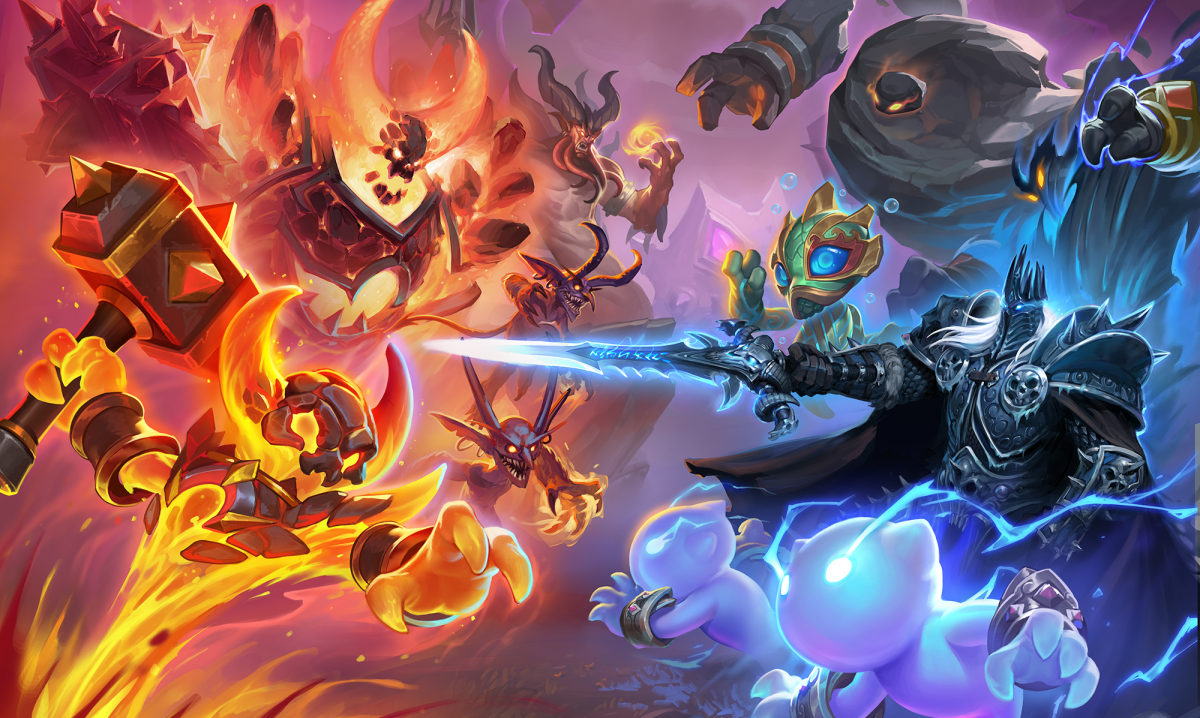 Popular Hearthstone player and content creator Kripparian introduced the next major addition to Battlegrounds on YouTube today: spells. While every set added to Battlegrounds has been a minion type, this content update is foregoing new minions and bringing universal spells for players to try.

In total, there are 30 new spells that can be accessed once every four turns. Aside from the new spells, there are three exciting heroes joining the Battlegrounds: N’zoth, C’thun and Y’shaarj. It’s unknown if the newest heroes will be available to all players on the same day or if they’ll be exclusive to Tavern Pass holders for a limited time before eventually being released to the general public. 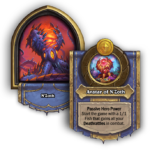 Here’s what you need to know about Hearthstone’s upcoming teased content.

N’zoth is the second Old God to be added to Battlegrounds and his hero power is a potent one for Deathrattle-focused builds. At the start of the game, N’zoth is given a free 1/1 Beast unit in similar fashion to Curator’s Amalgam. N’zoth’s free fish has a powerful ability that gains the Deathrattle abilities of slain friendly Deathrattle units, which can lead to an explosive finale in combat depending on how your comp is built.

Since Fish of N’zoth is a Beast, it can receive buffs from cards like Vermin Sensei and Goldrinn, the Great Wolf. Due to the typing for N’zoth’s fish, it’s unknown if N’zoth himself will be excluded from selection if Beasts aren’t in the shifting minion pool or if he’ll have a Menagerie advantage if he’s available in every game.

It’s also sometimes the correct play to sell the fish as a free source of extra gold. This circumstance is unlikely but should only be considered if you’re offered extraordinarily bad rolls or a severe lack of Deathrattle minions.

Lastly, it’s unknown if Fish of N’zoth’s effects will be doubled if it can reach its golden form. It’s possible for Fish of N’zoth to be tripled if it’s either stolen enough times by Murozond, Tess Greymane, or Rafaam. In addition to being stolen, Fish of N’zoth can become golden with the new Raise the Stakes spell found at Tavern Tier Four.

Another Old God revealed throughout the day was shown off by Thijs. When compared to Yogg-Saron, Y’shaarj’s hero power is even more random and unpredictable than the random Old God himself. At first glance, Y’shaarj’s hero power is fairly weak in a vacuum, especially when compared to the other new heroes. He can, however, smooth out bad rolls in the early game or allow you to spend spare gold on a potential minion to keep for later.

While Y’shaarj’s hero power only gets better the higher Tavern Tier you are, it’s also fairly likely for Y’shaarj to give you minions with Battlecries, which lose a ton of value when directly added to the board instead of being played from hand.

In addition to this weakness of losing out on valuable Battlecries, if your board is filled in the late game, you’re effectively locked out of using Y’shaarj’s hero power.

Revealed earlier today by Slyssa on YouTube, C’thun will be the most difficult hero to use when compared to all of the others revealed today. This is due to his hero power being the weakest in the game on its initial use, which leads to the need to understand his learning curve to play him optimally. Players will need to constantly activate it to accrue more value over time before it becomes useful for its cost. Since you’re spending a ton of gold early on weak stat buffs, there’s a good chance you’ll take a massive amount of damage because you’ll be behind on tempo.

To find success with C’thun, you’ll need to prioritize Divine Shield minions since any buffs you can land on units with the potent keyword will effectively be doubled.

All of the Darkmoon spells

The major focus of the new release, spells, is cards that players can discover and are found every four turns. Spells are free boons that can bolster a player’s strategy with either immediate tempo, like bonus stats, or gain value for later, like improvements to Bob’s Tavern.

Here are the newest spells sorted by each tier.

This is the first set of prize spells you can receive. You should expect to find this one when you reach six gold. Since these spells appear early enough in the game, you can expect every player in the lobby to be able to use them. Out of all the ones here, Might of Stormwind and Gacha Gift have a ton of tempo because getting a potential board-wide buff of up to +7/+7 worth of stats or finding an extra minion that can become a triple are both strong options.

Aside from those two, The Good Stuff and New Recruit have strong value implications if you sacrifice the other immediate tempo options. With The Good Stuff, being able to have all future minions gain bonus health will allow your future boards to be strong. New Recruit doesn’t gain any effective stats or gold immediately, but the consistency of better rolls in the future will provide a ton of immeasurable value the longer the game goes on.

This set of spells will be found when you first reach 10 gold. All of these spells can provide powerful swing turns. The strong tempo options from this pool are Gruul Rules and The Bouncer. If you find potent Divine Shield minions, it can be worth using these spells on those cards to run over opponents trying to gain value from other spells.

Evolving Tavern, Brann’s Blessing, and Time Thief all have powerful high roll potential if you decide to select them when offered. If you have a turn where you have multiple Battlecries like Tokens or Stat buffs, you can select Brann’s Blessing. With Evolving Tavern or Time Thief, you can find specific minions if you know your opponent’s Warband or the units that are within a higher tier compared to the current cards in Bob’s Tavern.

At this point in the game, most players will be eliminated. If you’re struggling and know you won’t reach top one, Ice Block is a powerful option that can give you a turn of stalling to reach top four for a victory. Buy the Holy Light, Repeat Customer, and Top Shelf are all the highest tempo cards that you can select if your board is strong or filled with powerful Battlecry units.

All That Glitters is the most interesting spell here. You can deliberately make a minion in Bob’s Tavern of your choice golden if you purchase everything around the select minion first.

Since this is the last set of possible spells you can obtain after 16 turns pass, it’s unlikely to find them unless you’re in the final two or three remaining players.

All of these spells are strong in their own right and can make you exponentially more powerful depending on the situation or comp you’re aiming to go for. Friends and Family Discount and Raise the Stakes are all powerful in Dragon-based comps. A one gold discount on Battlecries will help scale Kalecgos faster and Raise the Stakes will make one of your powerful units golden while giving you a chance to find Nadina.

Argent Braggart and Give A Dog a Bone are especially powerful in Elementals since that minion tribe usually has large minions to pass their stats onto the Braggart.

The three Old Gods that are being added to the game are also bringing new neutral minions into the pool. At Tier One, Acolyte of C’thun’s main purpose is to be another powerful option for a strong opening. Due to its stats and Reborn keyword, it’s impossible to lose with this minion in the first turn, assuming the opponent doesn’t have a powerful combat-augmenting hero power like Yogg-Saron or Millhouse.

In a lobby full of Poison minions like Murlocs and Beasts, it’ll be difficult to see him find success. But if you find him early and have enough Taunt minions, or make more Taunt minions with Defender of Argus, you can have a powerful minion for the later stages of the game.

While N’zoth’s minion wasn’t revealed directly by Kripp, it showed up briefly in his teaser video. Her effect is unknown, but the N’zoth-themed card is a Tier Three unit that has a Deathrattle. The Deathrattle will probably synergize with Fish of N’zoth and Baron Rivendare.

What does this new content means for the meta?

Since some of these spells and minions are similar to already-existing cards and abilities in Battlegrounds, it’s possible that a few cards will be removed in place of the new content, like Acolyte of C’thun in place of Righteous Protector since both are Tier One neutral Taunt minions. Another example of a possible replacement is that Ice Block is now a neutral option, which means Akazamzarak’s purpose will need to be reworked for him to find consistent viability.

While all of these teasers provide a nice glimpse into the near future of Battlegrounds, it’s also unknown if balance changes will be included with tomorrow’s content update.

You can try out all of the new spells and Old Gods when Hearthstone’s next update drops tomorrow, Dec. 15.