AND THE GOOD CARDS ARE FINALLY ARRIVING!!!

So, we finally started getting good cards, and we can start seeing a lot of patterns that I can say that I am enjoying.

We got a couple of spoilers this weekend, nothing much to begin with but in the end we got two powerful Legendaries, let us start talking about everything, shall we? 😀

Alright this dude is…. Horrible. No one can even think of a way this card would ever be playable, and we get yet another 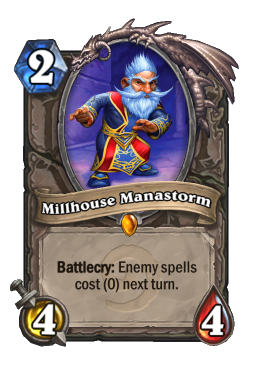 Blizzard kept their policy (???) of showing us the worst cards of the collection early on, so we can get hyped later I guess.

This card is nothing but a 400 dust ticket.

Pun in name! How cute!

I remember seeing a “WOG Bingo” on reddit this week and laughed pretty hard about it, in between the cards there were a “Bolf legendary”, a “100 dust weapon” and a “Pun in Name” options, guess the Bolf Legendary is the Boogeymonster, and the two last options are this weapon.

To make it clear, this weapon isn’t playable because of the high tempo loss it gives you for the little advantage you get by using it. Sure, you’ll be using this forever and in case your game goes fatigue you’ll have a constant source of two damage which could be nice, but everywhere else this card would be just plain dead weight, and as a Warrior you are not supposed to be equipping weapons just for the fun of it, meanwhile there are much better options for fatigue wars than this card, which leads me to believe this is a completely useless card and that, as nearly everything spoiled so far in the reviews, you should disenchant this on sight.

Aaaaand we finally start seeing the interesting part of the expansion! This card is… amazing.

I will not lie, it is not overpowered or anything but it feels decent enough.

Considering power-level, the Toxin cards are something about 0.8 cards, which isn’t amazing on its own, but then you realize the Toxins aren’t coming out of your deck and that a 3/2 for 4 mana that draws you 1.6 cards that are both good and not coming from your deck seems good enough. Don’t fool yourself thinking the Toxins are situational and just “better spare parts” because they’re not, every Toxin has a decent use in Rogue, and so far I don’t see any rogue deck that wouldn’t want to run this card.

Miracle Rogue? Oh, I would love to.

Keep in mind, however, that despite this Legendary card being good it is not almighty, meaning that eventually people might can come to the conclusion that it is not a must-have card, much like all The Grand Tournament cards, this card seems more like a tech card than anything, and you’ll probably be running this instead of a

If you’re looking for a card to add to your Rogue deck, feel free to craft this guy because you won’t be regretting it – it is good, very good – but in case you still don’t have your full rogue deck, there are other cards that you’ll need with more urgency like

Although this card was obviously created with the Hunter Control strategy in mind, and despite us despising the Dev that keeps pushing that idea at us, this card has some potential alright.

The obvious interaction is comboing this with

unleash-the-hounds and filling your hands with random beasts. This interaction, however, can be seen and flawed by some and it probably is, but in case the metagame slows down to a point the games start being a grind fest, this card can start to pop up in slower versions of Midrange Hunter that start to appear to fight Control.

This card has potential, but I have to admit it will be very hard to work it up to its prime, so as a suggestion you shouldn’t be trying to play with this card early on when the expansion hits and instead you should let the pro players do the decking math.

The concept is incredible, and the playability of this card will depend completely on

big-game-hunter’s dominance on the metagame. However, the board impact of this card against Aggro decks is devastating. Healing for 8 every turn isn’t something most aggro can play through, and they’re likely to need either lethal or a way to –  with the minimum damage to their own board – deal with Ragnaros the turn you played it or they’re as good as dead.

This card combined with Forbidden Healing and we start seeing a pattern here: Paladins are back to the Control side of the Force, how magnificent!

I can see Ragnaros, Lightlord being a staple on greedy Control Paladin decks, and I have to admit I would love to know that to be true.

Maybe it is just being too hopeful about a future in Hearthstone without Secret Paladin, Midrange Druid and powerful aggro decks with tons of damage and Deathrattle minions, but if this pattern of greedy Control Decks start being a thing, the game will be lovely.

Another nice thing is that different from his angry brother,

ragnaros-the-firelord, this guy can not be easily countered by a swarm of tokens on one side of the board.

Don’t let yourself be fooled: This is a wonderful card, and it will see play if the metagame gets too slow.

“Now imagine a world where Ragnaros says ‘Live Insect’ at the end of your turn and heals you instead of dealing 8 damage to your opponent!”

And we start seeing good cards, finally! Sure, all the good cards spoiled this far were Legendaries (Shaman, Rogue and Paladin) but at least we’re getting something.

I wish to see good non-Legendary cards soon, because in the end they’re the ones that matter (because you’ll have twice the chance to draw them at any point in the game when compared to Legendaries). Well, one can only dream!

We’re keeping up with the streak of spoilers, don’t forget to tune in once in awhile here at Hearthstoneplayers to check our opinions on the spoiled cards!

Love you guys, til next time!