Woah, that was quick. Five cards in a day? Well, guess you guys will have more Analysis than! 😀

For those who just came here, I have been making a series of Analysis about the new expansion cards, whenever a card comes out we talk about it and try to see the deep points in the card design and what they mean for the game itself.

This expansion we have been getting a lot of rather disappointing cards, but I believe the reason behind this is not only that they want to lower the power level overall, but also the hype is yet to come!!

Another cool thing is that despite the expansion not looking so good, Blizzard seems to be getting some Control Shaman and Deathrattle Rogue love, which seems nice, and for that I am hyped.

This guy is hummm, not really excited about them. Sure, transforming your Silver Hand Recruits – note this card says “summon” just like Knife Juggler while Hobgoblin says “play”, meaning this will for sure buff your 1/1s – into

argent-squire could be nice and all but there doesn’t seem to be other good uses outside of it, which makes me believe this card won’t see play at all.

Another thing to note when analysing this card that makes me sure it won’t see play is that it wouldn’t make the cut into aggro decks because it is just way too slow.

If you didnt despise cockroaches enough, know now that they also are part of a secret cult to take over the world!

cthun. This looks like just yet another card that won’t see play, simply because despite having vanilla stats, it has no relevant ability at all and that makes it so your deck gets crippled by a lot when playing a card like this.

I like the Cultist idea but I believe Taunt and Charge cultists are the ones that should see play, and no C’Thun deck will be viable if we don’t get playable cultists soon. The 4/2 Divine Shield is a good example ( 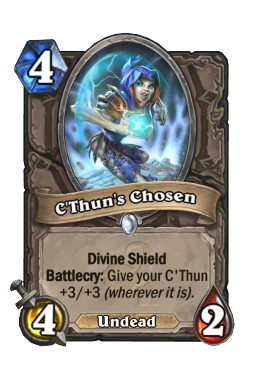 cthuns-chosen, just remembered the name) of a playable cultist, but in case we only have one good cultist there won’t be anything to create a cult for.

Oh this one seems quite good! Different from the rest of the expansion, this card may actually see play as it looks like a pretty good value spell overall.

Drawing 3 cards for 5 mana isn’t something to be so hyped about, but when those cards are guaranteed to be at least “decent” while you have the upside of not getting into fatigue quicker this card might actually generate some Control mirror attrition!

However – and take note at this, for it is very important – this card should be cut from Control decks from time to time depending on the metagame, actually come to think of it this won’t be seeing play most of the times, because this card only reward the most greedy of the Control Mage decks, and while this could be a good thing you’re still losing a lot of tempo by “wasting” 5 mana to draw 3 cards that can’t even instantly help you in the game.

Oh, Reno Mage will love this card by the way.

Now this is a strange version of

varian-wrynn. While Varian saw no play at all, this guy has some chances of seeing play in greedy Druid Ramp decks if that ever becomes a thing. The thing that bugs me about Druid decks is that some cards will “chose one” won’t activate, but overall if your number of strong legendaries is still high you’ll have good chances of getting useful cards.

Overall I dislike this guy, seems a lot weaker than the other gods and I won’t lie to you: This has very low chances of seeing play.

But as the other god cards this one seems to have something very specific prepared for it that we haven’t seen yet, so I won’t discard this card’s playability just yet, I just wouldn’t bother crafting it.

Did you ever thought about running two 10-mana cards in your deck? This guy seems like a card that would only fit in such a deck, yeah that one you never thought about, and probably as a one-of if that ever came to be true, which we both believe it won’t.

This guy’s body isn’t that amazing for a 6-drop but the stats seems to be distributed quite well for the number of points it got, which could be a huge factor to whether this is going to see play or not, but in general this will only be viable in case you really want to run more than two 10-mana cards in your deck, and in case you want to run 3 maybe running 2 of these guys isn’t a bad idea, but your deck will be so crippled that you’ll have chances of getting out-tempoed even by slow decks (because yours would be the ultimate slow deck), which could be a problem in the long run.

All in all this is a very narrow card, but at the same time it might allow for some crazy greedy strategies to pop up.

This seems quite decent, although I wouldn’t want to run two of these in my deck (maybe I would? O.O), I believe running one could be ok. The only thing that bothers me is how this card is going to interact with 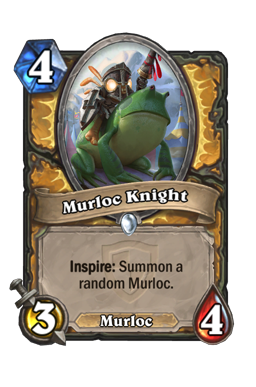 murloc-knight – which interactions are the biggest reason I would want to run Vilefin in my deck.

Justicar’s Battlecry only works with Basic hero powers, so you won’t be getting two 1/1 Murlocs which is sad.

I like this card, I like it a lot because it activates a lot of good things in general deck building, having your 1/1 tokens get buffed by 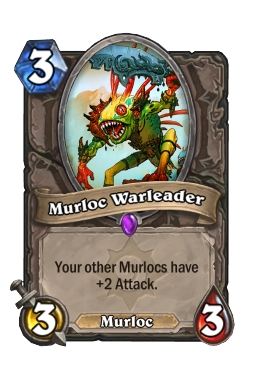 murloc-warleader seems powerful enough that i’ll want to try it out and see for myself, so maybe the speed will make up for the powerful late game strength of Justicar Trueheart.

Just remember you won’t get as many tokens out as you would right now, no

muster-for-battle will make sure of that, and even if it did the 1/1 tokens wouldn’t be Murlocs anyway, so maybe we won’t be able to make a standard deck as quick, but this card seems good enough that we’ll want to look into it.

Woah I talked a lot today, I hope you guys enjoyed this review – Which is being posted on 1st April, I know! – and just you wait for the next review because I have a feeling: good cards are coming!

I will be leaving now, have a nice weekend and I see you in a couple more cards reveal!

Love yall, til next time!