Miracle Rogue has certainly lived up to its name, as it is an archetype that has been proclaimed dead time and again, (sometimes due to Blizzard directly nerfing some of its key components, other times from the meta changing dramatically) and yet new incarnations keep popping up.

In this case, Whispers of the Old Gods’ nzoth-the-corruptor is a great thematic fit for a deck that works around maximizing card cycling and building up the resources for an explosive one-two punch kill, while cards like journey-below and xaril-poisoned-mind provide us with yet more options to keep a gadgetzan-auctioneer draw streak rolling.

While this deck shares some cards with my previous N’Zoth Rogue list, this version is a very different beast from that Aggro-based approach. It’s a slow, methodical deck that wants to take control of the board, not rush in for the face at the earliest opportunity.

I usually tailor my guides to beginners, and while this is not a common deck archetype for beginning players, I’ll provide detailed explanations of how to work with each card so no-one feels left out.

Just like its aggro-centric cousin, the keys to victory are forward planning and card combo awareness, and when you get over that hump, you’ll find that this can be a very satisfying play. It is also not a common sight in the ladder, so you’ll have the surprise factor on your side.

As usual, I’ll give you a deck overview where the basic strategy is discussed, and then I’ll go into detail on each of most of the cards. Finally, I’ll advise on some swaps you can make to cheapen the deck or adapt to a particular meta, just before finishing with some tips on how to mulligan.

Be sure to yell “It’s a MIRACLE!” whenever you pull off your winning N’Zoth turn!

Don’t be afraid to play your si7-agent or earthen-ring-farseer on turn three, without any of the battlecry / combo benefits, rather than passing it entirely or simply hero-powering. You need a board presence and you need it early on.

The point is to stall until the mid-game which is where this deck really starts to shine.  Once you start playing the likes of tomb-pillager and azure-drake, your opponent will start feeling pressure while you’ll start feeding your hand. This is the time to start planning your  gadgetzan-auctioneer Miracle turn.

It’s worth noting that the Miracle here is not a one-shot to your opponent’s face – those days are past us now, even if good old leeroy-jenkins still packs a mean punch, especially when comboed with shadowstep and cold-blood .

The true Miracle is the turn where you use your gadgetzan-auctioneer to fill up your hand with goodies while at the same time clearing your opponent’s board, placing you in a very strong position with enough board presence to kill him in the turns he takes to recover.

If he manages to come back from that, then it’s time to turn the tables once again by playing nzoth-the-corruptor and bringing back some very strong minions!

backstab is your best tool to lock down your opponent’s early game, and a great way to activate si7-agent on turn 3. Don’t waste it on anything you can kill via other means, though, as it is also a great way to feed your Miracle turn.

preparation requires – sorry – preparation to use properly. While it is usually a key component of your Miracle turn, don’t be afraid to use it to deal with an insurmountable threat early on – let’s say, allowing azure-drake and fan-of-knives to clear a threatening Zoo Warlock board in the fifth turn.

shadowstep is the most versatile card in the deck, and as such is one that will give you analysis paralysis more often and make you second guess yourself. Use it as a way to gauge your comfort and mastery of the deck!

From getting an extra shot out of si7-agent to finishing the game with a double leeroy-jenkins  strike or even forcing your opponent to quit in rage as you get yet another  nzoth-the-corruptor turn… The possibilities are enormous and it’s up to you to use your best judgement depending on your hand, the board, and your opponent.

cold-blood is here to give that extra range to leeroy-jenkins or one of your bigger minions. Even an azure-drake or a  gadgetzan-auctioneer have a chance of winning you the game once you pile +4 attack on them and have enough ammo to clear any threats to your board.

journey-below has the dual-purpose of feeding your  gadgetzan-auctioneer during Miracle turn, thanks to its low cost, while at the same time providing you with bodies to be expended and later revived by N’Zoth.

As a rule of thumb, you should prioritize sticky minions like sylvanas-windrunner  and cairne-bloodhoof against control opponents, and look for taunters when playing against aggro. A great, legendary deathrattle won’t save you if you’re swarmed.

eviscerate is one of your big guns, and will often end up being part of your lethal turn, so avoid using it early on unless your opponent drops a very problematic minion.

A good example are 6-health taunts – likely to show up when you play VS Druid and Warrior – where you’ll want to combine this  with backstab . Bonus points if you’re able to drop a gadgetzan-auctioneer  on the board beforehand!

sap is one of the secretly most powerful cards in the game, and one that gets better as the late-game progresses. Sure, it will do you no favours against nasty battlecries, but it will often negate an opponent’s entire turn for a mere two mana! Or just let you remove that one pesky taunter that’s blocking your leeroy-jenkins + cold-blood lethal.

undercity-huckster is solid as one of this deck’s trading fodder minions. Don’t be afraid to trade him early on!

The card awarded can be a stinker every now and then, but it’s usually good value and even if it ends up being mostly useless by itself, there’s a good chance that it will at least be a spell and hence potentially useful to combo with  preparation and gadgetzan-auctioneer.

earthen-ring-farseer can help you by healing up a minion in need, and maybe set up good mid-game trades by topping up azure-drake or tomb-pillager , but it’s mostly here to address the deck’s lack of early-game bodies while having at least some minor late-game utility, and should be played as such.

fan-of-knives is a free pass to card advantage land. A lot of cards in the deck play very well with it – azure-drake boosts the damage to aggro-wrecking effect, and preparation primes it for use with gadgetzan-auctioneer . But don’t be afraid to use one early on to gain some breathing room.

If nothing else, during the end-game you can always use it to negate leeroy-jenkins ‘s setback.

shadow-strike is pretty much a cheaper, less powerful assassination . Save it for those big, Druid / Shaman end-game taunts. Combo with azure-drake and a smaller minion to take out the really big ones – but make sure you play it before you attack!

si7-agent is a precious body in a deck that has too few minions. The combo effect is the cherry on top. As stated above, and just as with earthen-ring-farseer , don’t be afraid to play it as a simple body, if the alternative is just hero-powering your turn 3. 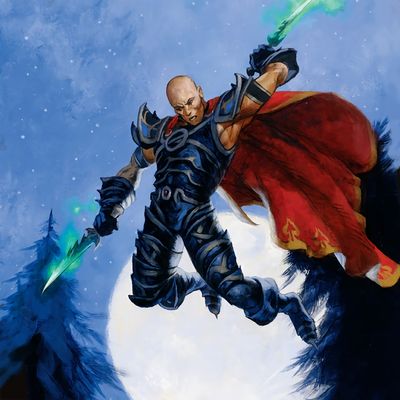 xaril-poisoned-mind provides you with sweet, sweet toxin low-cost cards that are just wonderful to use during your Miracle turn, and can even empower your combo cards in a pinch.

The body is not the greatest, but it can always come back for another go after a  nzoth-the-corruptor play – or you can also double-dip with shadowstep if you really want that extra toxin.

tomb-pillager is a fantastic mid-game threat and once it hits the board your opponent will feel a lot of pressure. Its deathrattle is the icing on the cake, often allowing for an early Miracle turn, or a couple of free cards during one.

azure-drake is one of the most powerful cards in this list, as you have a lot of damage-dealing spells to benefit from the spellpower. shadowstrike a big taunt? Check. backstab those annoying 3-health minions? Check. Even eviscerate gets extra reach!

leeroy-jenkins: the Legendary paladin strikes again! While we are far from Leeroy’s glory days, he is still a very viable finisher, especially when paired with with cold-blood , shadowstep and / or eviscerate .

gadgetzan-auctioneer is the centerpiece of the deck’s strategy. I’ve described above most of the cards you need to keep in mind  to synergize with him, and it’s worth reminding you that once this hits the board, it will be a lightning rod for your opponent’s removal, so make an effort to only play him once you can extract some immediate value.

Just like backstab , there are a myriad ways in which you can play around this card and they all depend on your exact situation – sadly, this is one area where guides will only take you so far and you need to rely on good old experience.

I can tell you, however, that what you should aim for after playing it is to have the board mostly for yourself, and a either a path to lethal or close enough in your hand.

nzoth-the-corruptor is your ultimate finisher. This list runs pretty light on Deathrattles but the ones it does have are very impactful ones, so you’re guaranteed value from your N’Zoth play – plus you should have cherry picked the best from journey-below .

This deck has a lot of moving parts so it’s not as tinker-friendly as usual, as some swaps could really upset the balance. For example it might have a single shadowstep but that one card is essential for several plays.

That said, you can tune the deck a bit more toward control by removing leeroy-jenkins and replacing it with fan-favorite sylvanas-windrunner .

And while any of your minions can benefit from cold-blood , removing leeroy-jenkins lets you make a case for removing it and introducing a second shadowstep – very useful for saving endangered minions or milking extra battlecries from them.

Another potential cold-blood replacement is a second shadowstrike . It can be a serious boon against  Druid’s never ending supply of taunt minions.

There is never a case where you don’t want to have backstab in your starting hand. If you feel you are up against aggro, fan-of-knives is also a solid choice. And if you have the-coin , si7-agent is another top pick.

If you suspect your opponent is playing control, feel free to keep azure-drake or tomb-pillager , or even a gadgetzan-auctioneer if you have the-coin .

This variation on N’Zoth Rogue is, like former iterations of the Miracle Rogue, an absolute blast to play – but also extremely challenging to play well.

I’m not ashamed to say that I cut my teeth on the Mirage archetype during the early days of Hearthstone, and I took a lot of beatdowns until it clicked for me.  This is not your average easy to pick-up-and play deck, but it’s a fantastic choice if you’re bored with most top decks and want to test your Hearthstone mettle.

If you’re rather play a more beginner-friendly version, with the miracle component replaced by an aggro strategy, you can try out my previous Rogue deck.