Hello friends, I’m Shudogin! I am back with even more demon-fueled madness. This Warlock guide aims to show off how incredibly strong Demon Warlock can be in the current aggressive meta. After I saw Justsaiyan hit number one legend with this deck earlier in the season, I had to give it a try. Ultimately, after having personally played over a hundred of games with this deck, I can safely say that Justsaiyan has created what I believe to be the best anti-aggro deck in the game.

This deck uses Warlock’s incredible board clear, stalling, and card draw to reach a punishing late game. Unlike many other decks that attempt to beat aggressive rushes, such as Control Warrior and Priest, this Demon Warlock sacrifices very little late-game potential for the crushing control it presents earlier in the game.

During the first week following the Goblins versus Gnomes expansion, there were many zany incarnations of Demon Warlock floating around (no pun intended). Despite voidcaller enabling some ridiculous Demon combos, ultimately none of the flavors of Demon Warlock achieved tier one status. With the rise of Mech Mage and other aggressive minion heavy decks, this season actually marks the first era in which Demon Warlock is truly shining.

In the past, there were two popular Demon Warlock varieties. In the faster incarnation, the deck relied heavily on an early Zoo-like presence and complemented that with floating-watcher, doomguard, and malganis. This flavor of Demon Warlock tended to lose early game pressure if it drew its late game threats without a voidcaller. Despite initial popularity, traditional Zoo-lock prevailed over its more demonic counterpart. The other quasi-popular Demon Warlock incarnation was essentially a modified Hand-lock, with many of the classic turn 4 threats replaced by voidcaller plus Demon combos. In the end, neither of these initial Demon-lock attempts stuck.

What really sets Justsaiyan’s Demon-lock apart from its two predecessors is the inclusion of 11 two mana or less board control cards combined with the incredible Area of Effect (AoE) board clear offered by hellfire and shadowflame. With many of the other tier one decks currently heavily relying on early game minion presence, the meta could not be more perfect for a deck like Demon Warlock.

I have played this deck since the beginning of the season with fantastic success. I was even able to compile statistics on 72 games played. These 72 games were played the first week of February, immediately following the ranked ladder reset. Over the course of these games, I went from rank 18 to rank 6. As you might notice, I did not play against a single Warrior deck. I attribute this simply to many Warrior players using faster decks to climb the ladder at the beginning of the season. Unfortunately, I wasn’t able to differentiate between split style classes in my statistics. With this in mind however, I went 2-3 versus Hand-lock, 4-1 versus Zoo-lock, and 4-1 versus other Demon Warlocks. 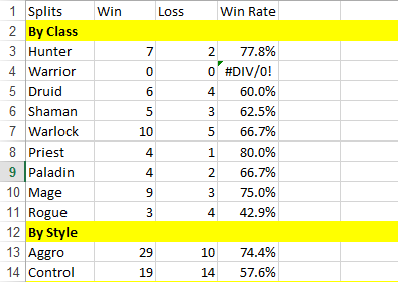 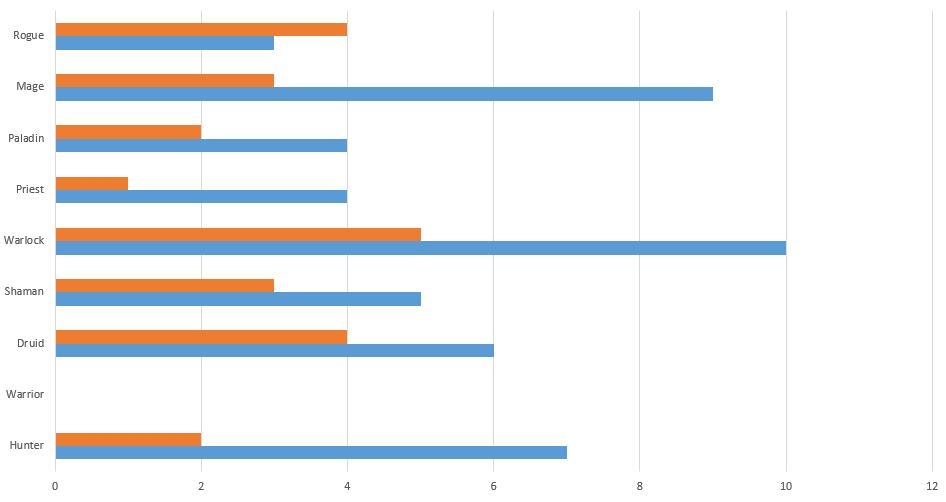 Let’s look at some of the card choices that make this deck so strong!

This deck focuses on maintaining board control from the beginning of the game. Warlock is uniquely suited to this task due to its hero power. Because Warlock has accelerated card draw, we can include more early game control cards than most other decks. More importantly, most of the cards used to establish dominance over the board in the early game scale well as the match progresses.

With the current popular decks roaming around on ladder, I believe this form of Demon Warlock is the most effective. That being said, the deck is not very cheap to craft. Here are some of my possible deck techs and substitutions.

If you have any other ideas on tech card choices or substitutions, I would love to hear them in the comments section!

This Demon Warlock deck plays out differently than any other Warlock deck I have played in the past. There are several game-deciding choices that must be made every game. These choices largely involve predicting whether we need to play defensively or aggressively versus our opponent.

This deck generally does extremely well versus any aggressive deck. Generally speaking, having board presence on turns 1-3, removing enemy minions on turn 4, and maintaining control on turns 5+ is ideal. During the later stages of the game, granting Taunt to big minions becomes the priority. My Mulligans against aggressive decks are:

When playing against control decks, it is important to not overextend early in the game since the deck has the capability of chipping away health. Typically we’ll want to gain board control early and then use Life Tap to whittle our opponent down and drown them in card advantage. My Mulligans against control decks are:

I will cover more detailed strategies in my Class Specific Section.

Playing this deck to its full potential requires intimate knowledge of the deck’s match-ups. Especially at the highest levels of play, being able to predict our opponent’s deck-style is critical to adjusting our strategy mid-game and sealing the deal from there.

Hunter always seems to be popular, regardless what cards get buffed or balanced (nerfed). I attribute this to the Hunter class being the only class with a consistent burn mechanic (an article for another day). The latest popular incarnation is definitely of the Face variety.

Beating Face Hunter can be a challenging task for this deck. Because of the massive amounts of burst damage Face Hunter is capable of early in the game, it is important to use Life Tap with caution. In general, Face Hunter is extremely susceptible to our early game minions and spells such as zombie-chow, mortal-coil, and haunted-creeper. This is largely due to Hunter’s heavy reliance on one-health minions early in the game. As long as we carefully manage our health, this match-up is not difficult to win. It is important to get large Taunt minions on the board to block wolfrider, arcane-golem, and possibly leeroy-jenkins damage. Overall, Demon Warlock is favored to win this match-up. Mulligans:

Mech Mage is an aggressive archetype that happens to favor Demon Warlock. Mech decks generally rely on heavy board control early in the game. Fortunately, this Demon Warlock deck has many tools for dealing with minion-heavy board states. A well-timed hellfire can absolutely destroy a Mech Mage’s hopes of winning. Mulligan for:

Playing against a Mech Mage is largely about saving our board sweepers (i.e. hellfire) for as long as we can in order to get maximum value from it. Through mechwarper‘s unique ability, Mech decks have the ability to spew their entire hand on out onto the board. This situation is ideal for Demon Warlock as our AoE should devastate their entire board, allowing us to pick up an easy win.

Oil Rogue is a relatively new creation, similar in play-style to traditional Miracle Rogue. Similar to Miracle Rogue, Oil Rogue has access to massive burst damage, removal, and card draw capabilities. In order to beat an Oil Rogue player, it is important our early-game minions are able to force out removal to stay out of combo range. Oil Rogue is typically favored in this match-up. Mulligan for:

As the game progresses, it is critical to keep large Taunt minions on the board to block Oil Rogue’s burst. This is one of the match-ups where lord-jaraxxus is best used as a minion with Taunt. Careful managing of Life Tap is even more vital in this match-up as keeping our health out of combo range is one of the most difficult aspects of the Oil Rogue match-up. While this is definitely one of the more challenging match-ups for Demon Warlock, Oil Rogue is definitely beatable.

Priest is a decent match-up for Demon Warlock. As the game progresses, Demon Warlock gains a huge advantage by being able to play lord-jaraxxus. Control Priest has no reasonable way of dealing with a new 6-6 infernal every turn. Therefore, the important thing to remember is to prevent the Priest player from taking board control in the mid-game. Mulligan for:

mortal-coil and darkbomb offer great early reach in the Priest match-up. It is important to deal with northshire-cleric, dark-cultist, and auchenai-soulpriest the respective turns they hit the board. Additionally, playing around spells like shadow-madness is critical. As long as Control Priest does not snowball board control early on or in the mid-game, Life Tap and Lord Jaraxxus will eventually take over the game.

While Paladin peaked in popularity last season, there are still plenty of Mid-range and Control Paladin decks on ladder. Mid-Range Paladin relies on establishing board control in the early game and then playing huge threats during the mid-game. A large portion of the deck’s success can be attributed to muster-for-battle and quartermaster. Fortunately for us, hellfire offers a great answer to the quartermaster combo. Mulligan for:

This match-up largely comes down to skill and knowledge of the opponent’s deck. Both Mid-range Paladin and Demon Warlock have a multitude of controlling minions and spells. When playing against a Mid-range Paladin, hellfire and shadowflame almost always guarantees Demon Warlock board control. The tricky part is then avoiding the masses of Paladin removal and control cards. Avoid overextending as this leads to getting blown out by the equality plus consecration combo. Similar to Control Priest, Paladin struggles to deal with lord-jaraxxus and his continuous stream of infernal. Overall, the match-up is fairly even and will thus be draw-dependent and highlight any differences in play-skill.

At the beginning of the season, I ran into a fair amount of Zoo-lock and even a few Hand-lock decks. However, these decks have all but disappeared so I’ll only be covering the mirror Demon Warlock match-up.

Winning the Demon Warlock mirror match requires obtaining board control early, maintaining card advantage, and avoiding unnecessary damage. This is a match-up in which using voidcaller to summon lord-jaraxxus or malganis shines. In particular, Mal’Ganis buffs up our other Demons and prevents collateral damage. Mulligan for:

It is important to get premium value out of our minions. defender-of-argus is great for achieving this. Additionally, nerubian-egg is an amazing early-drop in this match-up due to the amount of AoE damage that is sure to be used by both sides. Due to the fast-paced nature of the match-up, try to summon Lord Jaraxxus via Voidcaller as playing him on turn 9 will provide little to no tempo advantage. Ultimately, this match-up largely comes down to health management and once again getting value from minions.

Demon Warlock is definitely one of the most viable and fun decks on the ladder at the moment. This incarnation of Warlock offers a consistent experience against aggressive decks while still reaching an incredibly powerful late-game. If you guys have any other tech choices or card replacements that you have had success with in this deck, I would love to discuss them in the comments section. If you have any other questions or feedback feel free to e-mail me at [email protected], or comment below! Finally, if you enjoyed my guide, consider giving it an up-vote!