Today, I’m writing a very different type of article, but one that I feel is very relevant to your typical competitive Hearthstone player.

Making it to Legend rank can be incredibly stressful and time-consuming. It gets harder every season as well as the player base gets more experienced and the grind gets tougher.

However, there are ways to make the climb enjoyable and to keep you focused on the way up the ladder.

The first couple of ranks you get the benefit of win streaks to help you out.

As a result, you can make it up ranks even with just a 50% win rate.

At the beginning of a season, it becomes a bit of a mad dash up the ladder as players who made it up to legend or a high rank begin the season at 16 or so.

Most decent players don’t have such a hard time at this rank, even so, there are a couple of tips to make getting through this part of the climb better.

Heart of the Grind

Once you reach rank 5, this is where the heart of the grind is.

Win streaks are no longer awarded, and every single game is important in ranking up.

I take every game here really seriously and never underestimate anyone.

Lots of players linger in these ranks even at the end of the season not because they are weak players unable to rank up faster, but rather they’ve been busy and haven’t had time.

I’ve run into top pros like TidesofTime, Freshca and Chakki at these ranks late in the season and there are so many competent players that you have to keep focused at all times.

Here are some tips to push the last bit of the way to legend.

I know if you’re reading this so far, you’re thinking, “oh you make it sound so easy, it’s so much harder than that.”

Well, believe it or not, getting Legend has never been easy for me. It’s taken me two weeks at the very least to make it to legend, and sometimes in particularly tough seasons, I haven’t gotten Legend until the very last week.

Among those climbs, I’ve had some really disheartening losing streaks including a recent loss streak that totaled 8 games and over the course of a night brought me down from Rank 1 all the way down to Rank 4.

Tilt in Hearthstone is very real. Losing a few games in a row can lead to players making more and more mistakes, and getting extremely salty.

Even the very best players can succumb to a series of bad RNG rolls and lose a few games in a row.

So I’m going to bring it right to you, here are my top 5 most rage-inducing cards.

Now that that’s out of the way, look at the list.

They’re just a bunch of cards that can largely be played around, countered or otherwise controlled. You are the one in control of your deckbuilding, in control of how you feel about losing to these cards.

Doesn’t it seem silly now to get upset about losing to these cards? That rage can be channeled into teching your decks better, focusing on countering them and generally not getting as upset about it.

Okay, Camzeee, I get it, but I still have anger problems and get on tilt, what do I do?

This doesn’t apply to most players, but there are some who find the process of laddering so stressful they choose not to do so at all.

I’ve felt this coming on a few times especially if I haven’t played for a while. Some of the key fallacies that come to mind are: 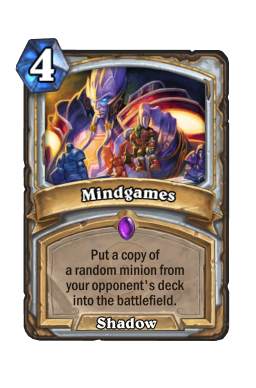 The purpose is all about mentality, namely – optimism. Having a positive outlook on Hearthstone laddering is the most important element when it comes to grinding the ladder up to Legend.

Yes, you want to win, yes you want to make it to the top, but you’re also there to have FUN.

You’ll catch yourself sometime cursing, conceding early, sending BM messages, but if you take a second and really think about it, Hearthstone is just about having fun.

Mind Games encapsulates what Hearthstone is really about – hoping for the best draws, throw in a bit of RNG, and not taking it too seriously.

Making it up to Legend should be a natural by-product of playing and improving at the game while having fun in the process. It also helps that a lot of the stress of laddering goes away when you think about it as just another game.

Go out there, have fun laddering. It’s a process to be enjoyed not hated, and believe in yourself!