Rafaam makes being EVIL so much fun. 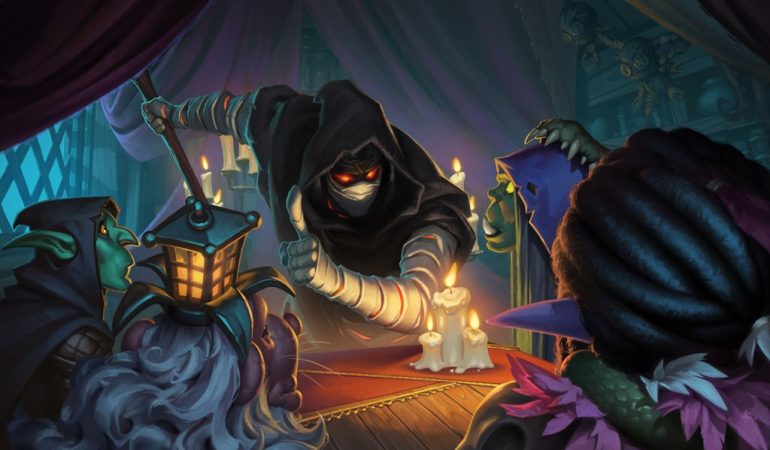 All week, Hearthstone players have been participating in the new Blackrock Crash Tavern Brawl event.

Starting tomorrow, they’ll have a new playable character to use during the Brawl: Arch-Villain Rafaam.

Rafaam considers himself to be the Supreme Archaeologist and is an original character made for Hearthstone. Leading up to the Rise of Shadows expansion, Rafaam assembled a team of villains with the goal of capturing some of Azeroth’s most priced possessions. This team of villains dubbed themselves the League of EVIL and were recently successful in capturing the magical city of Dalaran.

As the League of EVIL flew the magical city of Dalaran toward Uldum, tragedy struck. Rafaam and company crashed the floating city into the side of Blackrock Mountain. In order to escape, the villains will need to hold off the occupants of Blackrock Mountain while Dalaran is made mobile once again.

Currently, players have four heroes to choose from: Dr. Boom, Lazul, Hagatha, and Togwaggle are all available for use alongside their respective classes. As of July 17 players can add another name to that list, Arch-Villian Rafaam.

Rafaam will not only bring his special brand of EVIL to the Brawl allowing you to play as the Warlock class, but you will also be able to use him to obtain a special reward. After defeating all eight bosses using Arch Villain Rafaam, players will earn a Golden Rafaam’s Scheme card. This card joined Hearthstone with the Rise of Shadows expansion and is part of the Warlock set. For three mana, Rafaam’s Scheme lets you Summon one 1/1 imp. The spell also upgrades each turn it’s in your hand.

This Golden Rafaam’s Scheme card will be a must-have for any serious Warlock player, so it wouldn’t hurt to get some practice in now before Rafaam joins the fray. You can check out our guide on the new Brawl here to get a leg up on the competition. Rafaam joins the Fire Fest-EVIL on July 17.