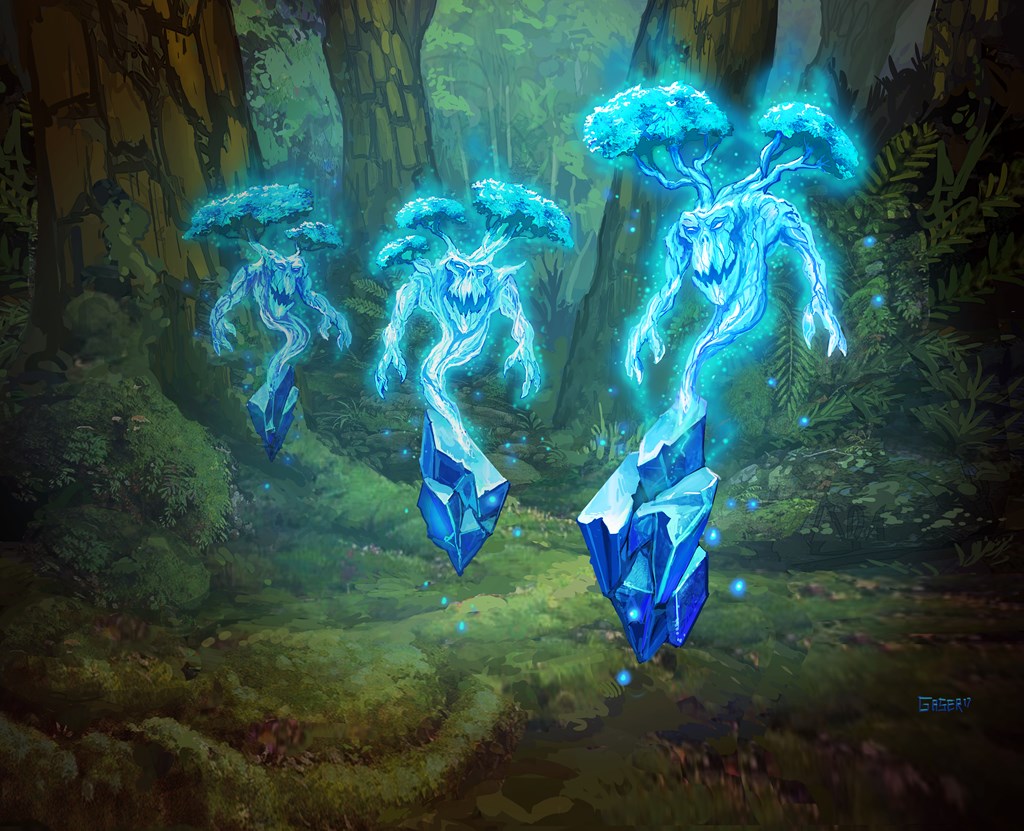 Nature works for you in these Druid lists, exercising several class synergies to put you over the top. Flood the board with low cost minions, then strengthen their power levels before the opponent has time to respond with Token Druid. Or employ the power of Jade Druid and create an army of giant Jade Golems at your disposal. Choose the one that suits you best and make the climb today.

Token Druid is an aggressive strategy that utilizes low cost minions with Druid’s many buffs to quickly apply pressure to the opponent’s life total. Alternatively, the deck may accelerate a minion to the board, like Vicious Fledgling or Bittertide Hydra, that’s both difficult to deal with and provides a quick clock. The deck is at its best when it’s not playing fair.

Token Druid floods the board with several low cost minions combined with Innervate and/or a buff. Fire Fly, Enchanted Raven, and Bloodsail Corsair each provide strong first turn options. Bloodsail Corsair brings Patches the Pirate out of the deck, applying two minions to the board for the price of one. Mark of the Lotus and Power of the Wild represent the deck’s anthem effects, and combined with such an early board presence, create board pressure that requires multiple turns and resources to deal with. Savage Roar is best saved for a finishing blow following a Living Mana, or in anticipation of the opponent’s AOE removal. Living Mana creates a 2/2 body on the field for every mana crystal—as many of you have board room for anyway. It’s perfect for reapplying pressure to the board after the opponent deals with the initial wave.

In addition to flooding the board with low cost minions, the deck plays several resilient minions as well. Innervate into Vicious Fledgling on turn one is one of the deck’s strongest plays and one of the biggest headaches for opponents. Fledgling adapts each time it attacks a Hero, so the Windfury adaptation is most desirable. After that, prioritize keeping Fledgling alive and plan accordingly relative to the board state. Bittertide Hydra presents a large body for its cost that demands a fast answer, preserving the rest of the board and forcing the opponent to spend a turn and likely multiple resources to deal with it.

The deck contains several flexible slots that can be tuned toward a particular matchup. Hungry Crab and Golakka Crawler perform well against the other aggressive strategies of the format, Murloc Paladin and Pirate Warrior respectively. Tar Creeper prevents proactive trades from the opponent. Genzo the Shark provides a way to refill on resources after the initial turns have passed. You may choose to make the deck even more aggressive on the ground, removing the deck’s slower elements for a Murloc package of Murloc Warleader, Bluegill Warrior, and Finja, the Flying Star. Keep track of what you’re beating and what you’re losing to while playing on ladder, and adjust the deck to your needs accordingly.

Jade Druid is a ramp strategy that provides the most powerful late game board state in the format. The deck accelerates through Wild Growth and Jade Blossom that ends in an infinite recycle of Jade Idol through Gadgetzan Auctioneer, filling the board with mighty Jade Golems. The deck struggles against aggressive strategies, but absolutely excels against the slower decks in the format.

There are two main components to Jade Druid: ramp and Jade Golems. The deck utilizes several cards to accelerate its mana and reach its powerful end game faster and overwhelm its opponent. Wild Growth and Jade Blossom contribute this acceleration early in the game, and are ideal in the opening hand. Innervate offers temporary acceleration at all stages of the game, from accelerating Jade Blossom on turn one, to dropping Primordial Drake ahead of schedule to regain control of the board. Nourish either draws cards or accelerates mana, and combined with Fandral Staghelm, puts Jade Druid far ahead.

Jade Golems increase in power with each iteration played. Early in the game, Jade Golems do their best to trade with the board and buy time. Late in the game, they take it over. Jade Spirit and Jade Behemoth bring a Jade Golem alongside them as they enter the battlefield. Jade Idol and Jade Blossom get the Golem train going early and enable Spirits and Behemoths to create a more powerful presence later on. Jade Idol returns in the late game as an essential piece in controlling the late game alongside Gadgetzan Auctioneer. Upon casting Jade Idol, the player chooses between playing a Jade Golem or shuffling an additional three copies in the deck. As long as Auctioneer remains on the field, Jade Idol may be played and recycled ad infinitum, creating increasingly strong golems with each cast for only one mana. Jade Idol also synergizes well with Fandral Staghelm, providing a nice little tempo advantage in the game’s middle stages. Aya Blackpaw tops the Jade Golem curve and provides a sturdy body, with a Jade Golem when it enters and leaves the battlefield. Aya demands multiple answers from the opponent and paves the way for a potentially unanswered Fandral or Auctioneer the following turn.

Jade Druid struggles against aggressive strategies. Wrath and Swipe provide the deck with limited spot removal—but with no strict AOE removal at its disposal, the deck struggles to keep up against strategies that flood the board. The best solution often is to accelerate as quickly as possible to a Jade Behemoth or Primordial Drake and hope that buys enough time to build a board of Jade Golems. The late game Auctioneer and Idol combination isn’t as essential in these matchups, so play the second Idol instead of shuffling if you need the board presence.