Hi all, SnipedAgain here. I’ve made legend every season, and consistently made top 8 in NESL tournaments.  The largest difference between top players, and good players is the little tips and tricks behind each deck, and how to play specific decks in specific matchups. There are two ways to figure out these hidden details which include: Netdecking (copying another player deck) and then spending days playing it, or thinking about creating your own deck and playing it a little to refine it.

If you’re a new player, netdecking is definitely the way to go.  You have fairly little understanding of how the cards should be played, so it’s very difficult to create a strong deck by yourself. Using something that a good streamer plays often is ideal because you can watch them play their deck, and learn combos or secret tricks to their deck. Additionally, it’s far easier to copy a deck, than thinking thoroughly about different individual cards to put in.  Learning constructed is sped up heavily this way, and you can potentially hit legend in your very first season trying to imitate a play style!

Creating Your Own Deck

Although netdecking can get you quite far, you will almost never reach the top through performing that technique alone. Top players always have a different deck than what’s popular in the Meta, and for good reason. If you copy the popular deck, then you will just have a mirror matchup every other game. Assuming you are in legend, it’s very hard to break 60% win rate if everyone is playing the same deck you are without tremendous luck. Everyone is playing near optimally, and many games are decided by RNG at that level, and even changing a few cards can make an unfavorable matchup great. Additionally, creating your own counter, so that you can stay one step ahead of the Meta not only allows you to get favorable matchups, but also learn the new “top” deck before everyone else.

Examples of the Meta in History

Over the course of each Ranked season, the Meta has changed many times.  I will list out what the popular deck was that at the time, explain why it was good, and why it fell out of fashion.

Popularity: At the time, every one of the mage AoE freeze spells cost 1 less (Frost Nova, Cone of Cold, and Blizzard) and Pyro was 8mana.  This deck was so dominant because of the OTK potential, and the giants just provided an extra threat to deal with.  Certain variants didn’t even run giants and just ran straight draw and spell damage.  This deck with 2 pyros, 2 fireballs, 2 frost bolts, 2 frost lances could do a total of 46 damage from spells alone if you ignored the giants. Counter: Warriors are known as the main counter to this type of deck today, but were not prevalent back then and were heavily unexplored.  Druids with double healing touch, and control Pallys were the main counter for anyone who didn’t play mage. Fall: Blizzard decided that this deck was too OP, and nerfed all the freeze spells by 1 mana.  This was an extremely heavy nerf to mages, and they dropped from the top class to near the bottom.  Control Druids and Control Pallys took over at this point, but not for long.

warsong-commander used to be give charge to any minion, and 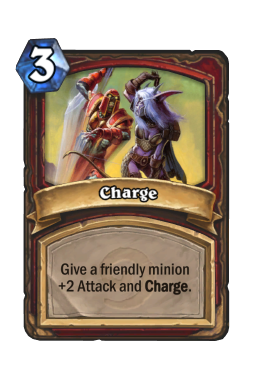 charge used to be 0 mana without +2 attack. On turn 7-8 a Warrior could play a

gorehowl, and then on turn 9 alexstraza +

charge would make for a total of 15 damage, which guaranteed a kill on anyone without armor. During this season, there was a bug where Alexstraza brought your armor+health total to 15, so it was a guaranteed kill until Blizzard fixed it.  The other OTK warrior deck was Warsongs, Molten Giants and Youthful Brewmasters, which comboed for as much as 38 damage for 7 mana as long as the warrior had 10 or less hp. Counter: The best way to beat the Alexstraza deck was to have a strong midrange deck (Druids were the popular choice). The best way to counter the molten deck was to force the warrior to fatigue, as they had few minions and just had to setup the OTK and kill them in 1 turn from over a high amount of health similar to how we deal with handlocks today. Fall: Again, Blizzard decided that these decks were too OP, and straight nerfed the Warsong Commander, and modified Charge into the 3 mana +2attack today.

Popularity: Druid was the leftover deck from the previous Meta, and was doing fairly well throughout all of Hearthstone.  With OTK Warrior out of the way, there was nothing stopping it from taking popularity, especially with Strifecro being #1 and continually using this kind of deck. Counter: Other midrange decks arose, such as priest, shaman, and rogue.  However, there is no real counter except to play higher value minions than your opponent.  This was actually the ideal Meta Blizzard wanted. Fall: They remained popular for a while, but were overshadowed.

Popularity: The main reason for this influx of aggro was because all of the new players just started playing, and they were the best cheap decks to make. Counter: Ramp Druid was my choice of counter because you could deal with the minions early with just hero power and a few spells and then drop your high value minions while healing behind it. Fall: Unleash the Hounds got buffed from 4 mana to 2 mana, and people took advantage of this.

Popularity: It beat every deck that involved keeping board control and winning because of it simply because of how much value the new hounds could put out with buzzard.  For only a 5-6 mana they got a board clear with massive draw.  Aggro Hunter was the original way to play this deck, but Lifecoach brought out a midrange Hunter which dominated the Meta. Counter: Most people had no way of dealing with the Hunter, and just played it.  However, Miracle rogue was a strong counter to the midrange version because it was minion light and spell heavy. Fall: Blizzard nerfed Unleash the Hounds to 3 mana.  This ended the Hunter’s dominance vs other midrange and aggro decks.

Popularity: Kolento brought the deck to everyone’s attention in the previous season.  Miracle is a little more difficult than Hunter, so it was being put off since Hunter was so strong and easy.  However, since Miracle is a really strong deck, people started learning it after the Hunter nerf.

Counter: Same as Hunter in that there are no real counters. The best counter is facerush decks, but facerush is pretty terrible vs midrange with many taunts/control decks.  Midrange/Ramp Druid is a fairly even matchup, but is worse vs Handlocks than Miracle. (Prediction) Fall: I believe that Miracle is a little too strong, and I’ve been playing it since the warrior nerf (Beta Season 3), with a ramp druid break in between during the aggro Meta. I could maintain a 7-80% winrate with Miracle until the aggro Meta set in, which is why I switched to ramp to continue with a high winrate. After hundreds (maybe over a thousand) games with Miracle, I can say that with confidence. Ever since this Miracle Meta has set in, I’ve tried to create numerous decks in an attempt to make a decent deck that counters Miracle in addition to being decent in other matchups. However, the best deck I’ve come up with is only slightly favored, and doesn’t do nearly as well as Miracle in other matchups.  The fall of Miracle will probably be some sort of change to Gadgetzan or maybe even the introduction of the Naxxramas cards.

At this point, Blizzard has done a good job of balancing, and a nerf like the 3 mana hounds will just cycle one class to down just so the next one can rise up. Miracle is slightly overpowered now, but if it gets nerfed, I’m sure another slightly overpowered (shaman/druid) will rise up to take its place. Top players will always be on the lookout for these slight balancing imperfections, but never forget that this is a game and that you should enjoy playing it. I hope this was helpful for new players to think about how to develop their skills and advanced players to think about how to create the next Meta.  Thanks for reading this article. If you want to see me go into more depth in certain decks, come visit my stream at www.twitch.tv/snipedagain.