Hi! I’m Asmodeus, multiple times Legend and infinite arena player. I’m also the author of The Complete Guide for Hearthstone Player. Today I’d like to break down and explain why the beatdown, or simply more offensive deck, has a certain inherent advantage in Hearthstone. We’ll also take a look at the slower decks which are viable and how they have to “cheat” in order to stay competitive. At the end of this article I’ll also try to provide a number of possible solutions to this problem.

Since the beginning of Hearthstone the aggressive and proactive approach to the game has been favored over reactive and defensive play. I don’t believe this was a deliberate design choice, but that it’s just the way that Hearthstone unfolded. New players coming to the game quickly learn that being offensive pays off much better on ladder, than trying to craft a deck that counters the aggressive and proactive builds.

League of Explorers will probably not change that, but we can see some interesting concepts that go in the right direction, such as 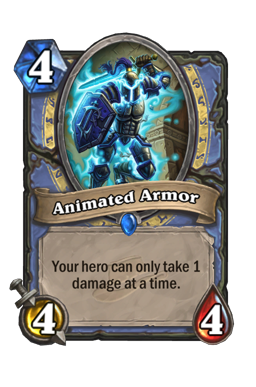 animated-armor. Those cards are just very timid attempts at new mechanics that Hearthstone needs, but they’re not going to be enough.

When choosing a reactive deck for ladder, it’s extremely difficult to find the right balance in order to be able to stop the aggro but not fall behind the control decks. If you want to play an offensive deck, all you need to concern yourself with is how to hit harder and faster, no matter who you are against. That’s one of the reasons why it’s much easier to ladder with aggressive decks that look to take the initiative.

Why is Hearthstone favoring the offensive approach? It’s a combination of a few factors.

1. Total health of a hero

The proportion between offensive damage capabilities and the health pool of a champion is largely what dictates the viable play styles. It would be difficult to scale the minions and spells, but if each hero started with 35 or 40 hit points, we would see a significant shift in the metagame. As it stands now, the health has to be defended quickly and the defender doesn’t have much time. Just a couple of

leper-gnomes coined out on turn one, can take a third of your hp and many decks will often not be able to deal with them quickly and efficiently enough. By the time you can start taking over with your higher value minions it’s already too late because you’re low enough on hp for a couple of burn spells, like the

kill-command, to finish you off.

There is a plethora of good, attacking minions to play and you can pick multiple of them for each mana cost. A zoo warlock is not really bothered whether he draws a

flame-imp. Most of the time he can play either of them and they’ll do their job, which is dealing damage to the enemy minions or hero. Because you can have a good number of proactive cards to play on each turn, you can almost guarantee having meaningful turns. Another benefit of using simple and strong minions like

piloted-shredder is that you can almost always play them, as long as you have the mana to do it. You don’t need a special board state, you don’t need to meet any requirements. You simply play them and force the enemy to react.

On the other hand, we have the reactive cards. Many of them, require you to meet a special condition in order to be effective. If you don’t meet the requirement the card will be pretty bad, but if you do, it will often become better than what you normally can get for the same mana cost. The problem is that you can’t control when you draw your cards and you can’t match the number of simple threats with a number of appropriate answers because there simply aren’t enough of them in the game.

Having reactive cards also artificially reduces your hand size because you’re holding unusable cards, so you would have to draw more cards, making it even harder to keep up in tempo when you have to spend some of your mana on drawing additional cards.

Simple minion and spell threats are also more versatile than the reactive cards because you can hit anything with them and use them in any way you need. You often don’t have that choice with reactive cards since they become much weaker outside their specific role.

How does first move advantage work

First move advantage is something that hunter players were aware of for a long time, due to the strength of

savannah-highmane and the general player base became more familiar with it, after the arrival of

dr-boom in Goblins vs. Gnomes expansion.

Whenever two players have

dr-boom in their hands, the one who plays it first will get an advantage. Even if the second players responds with something like

big-game-hunter, the boom-bots can kill that minion and then deal around 5 points of damage from their deathrattle, which can often be enough to deal with whatever else was played by the second player. Additionally player who dropped

dr-boom is free to play another threat in the next turn.

dr-boom as the second player and ignoring the threat, means that you’re letting your enemy deal at least 9 damage to your hero. That’s almost a third of your health!

This type of advantage is significant even when it comes to smaller minions. The player who is offensively playing minions every turn forces the other player to either have an appropriate answer or he can deal the damage to the enemy hero until the defensive player trades his minions or finally draws the removal. But even if you match the other player and play equally strong minions, you can’t trade until the next turn, and the damage is already done. This puts you further behind on your health total and forces you to trade even more unless you draw a specific card that can flip the tables and swing the situation in your favor.

The defensive player, always has to respect the threat of damage because it is guaranteed, while a chance of drawing a swing card to punish the aggression is usually much lower.

Despite the inherent advantage I’ve talked about, we can still see some control decks having relative success. The most prevalent classes that can use slower and reactive decks are Warrior and Mage. Both classes were played by current Blizzcon champion Ostkaka during 2015 Hearthstone World Championship.

The first thing that they have in common is the ability to “cheat” their HP value. They are the only classes who can consistently survive more than 30 damage being dealt to them, even if it happens in one turn. They’re also two of the best classes at removing enemy minions from the board efficiently with their wide arsenal of spells and weapons.

In the case of warrior, we have the ability to gain large amounts of armor. A resource that only warrior and mage can access on demand, allowing them to use slower turns earlier in the game to “bank” some health for the future. Every other class is normally limited to 30 health. Because warriors have many ways of gaining armor, they can sometimes accumulate more than twice the normal health pool.

The way that mage can “cheat” his health pool, other than gaining armor from 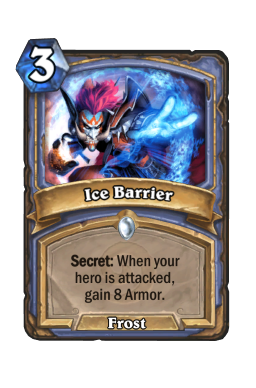 ice-block. With the help of

mad-scientist and by drawing enough cards, the mage can get two turns more to make a comeback or simply win the game. These two turns will also be late enough to provide enough mana for whatever the mage wants to do.

Both of these classes have a lot of great removal cards. Warrior can use weapons like the

deaths-bite and cheap removal spells to control the board until they can start taking the game over with big value minions. The mage can stall the game with area of effect freeze spells and removal that will give him enough time to draw a game ending combination of spells.

alexstrasza which can bring them back up from the brink of dying or help them with killing another slow deck.

Increasing the number or power of control oriented cards will never be enough because as long as the game gets new cards, the offensive decks also become more and more refined. If Blizzard wants to see interesting strategies that use slower decks in classes other than warrior and mage, they need to give other classes a way to cheat death.

I didn’t forget about warlock. The class is already in a good spot with Mal’Ganis, Jaraxxus and their extremely strong hero ability that allows them to play very efficient giants and drakes like no other class can. Their hero power also makes their decks more consistent and solves some of the control issues.

With the current state of Hearthstone, it is much easier to be the beatdown and play offensively, especially on ladder. Of course it’s still a game where people play against people (most of the time) and the imperfections in play allow for inferior decks to thrive. However the prevalence and longevity of control warrior and freeze mage, proves that the common elements between those decks are required if you wan’t to have a working deck that uses an interesting but slower strategy.