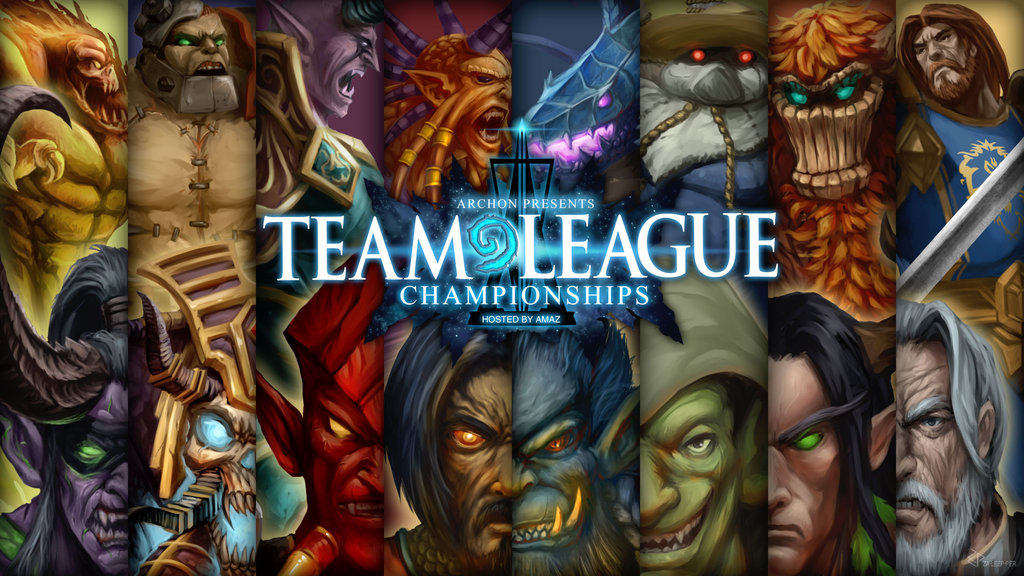 Archon Team League Championship (ATLC) is the best competitive league Hearthstone currently has to offer, both in terms of entertainment and professional gameplay. Every week, ATLC gathers 8 teams with some of the best and most well-known professional Hearthstone players. Each team has three players. Each player is playing two different classes. Because every team needs to bring 6 different classes, we have a chance to see classes that do not see much competitive play like Shaman, Paladin, and Priest. This format brings badly needed refreshment to Hearthstone competitive scene.

ATLC is still in its first phase, when all teams compete with each other online over the course of 7 weeks. After Phase 1 is complete, the 8th team is eliminated, while 6th and 7th play one more round for a place in Phase 2. In the second phase the 3rd, 4th, 5th teams and winner of the duel between 6th and 7th team, compete in double elimination bracket. Winners advance in Life Finale where they will battle the 1st and 2nd ranked team, from the first phase, for $250,000 prize pool.

Detailed explanation of ATLC format and its rules can be found here.

ATLC streams are really fun to watch thanks to high production quality and casting crews. Frodan, Kripparrian, Noxious, Amaz and others will make you laugh even during the most boring games. Moreover, their analysis will help you understand Hearthstone better.

If you missed ATLC this week, you can find VoDs on Amaz’s Youtube channel. Now let’s go over this week’s matches.

Many wondered why Team Celestial is not performing well when they have good individual players. Team captain, Tiddler Celestial, is probably one of the top 3 professional Hearthstone players in the world. He placed 2nd in BlizzCon 2014 World Championship, 2nd in World Cyber Arena 2014 and also won DreamHack Summer 2015 few months ago. However, in ATLC he struggles and has the 2nd worst individual score. His teammate, FrozenIce, takes credit for the worst individual score in league with his 26% win rate, which sounds even worse when you know he mostly plays the best performing classes: Hunter and Warlock.

Tiddler Celestial and FrozenIce usually practice on Asian servers, where a slightly different meta is played. Some players think that is the reason they have a bad performance. We can consider one more thing – team chemistry. All these players used to play individually. Now they have teammates who depend on them. When they lose, they feel twice as bad because their loss has also let their teammates down. This is something completely new for Hearthstone players. Effect of bad performances is multiplied by the fact that they are playing as a team. This can lead to lack of communication and consequently cooperation  needed for turning around a bad streak.

After a good start and two wins, FORSENBOYS had a rough last few weeks losing three matches in a row and placing themselves close to the end of the table. This is probably their most important match so far. The victory will secure advancement to the next phase of the League and lock Team Celestial to the bottom of the table.

It all started good for Team Celestial. Druid was able to manage early aggression, extend the game with heals from Ancients of Lore and develop the board with Ragnaros, but luck was not on his side. Ragnaros missed 33% lethal, twice. On the turn when it was “kill or be killed” for Chakki, luck smiled on him. He drew Ancient Golem who was buffed by Leokk to 5 damage needed for exact lethal. From that point forward, it all went downhill for Team Celestial.

FrozenIce was able to secure a victory, but it was too late. FORSENBOYS were leading 3-1 and Team Celestial was completely demoralized.

Forsen had a good start with and at one point developed a huge board with Mal’Ganis, Doomguard and bunch of smaller demons. However, Tiddler had a way to answer it, extending the game and possibly winning with big Grim Patron turn. He had two Executes and one Whirlwind effect to deal with Mal’Ganis and Doomguard. He played Whirlwind and then misplayed by executing Mal’Ganis first, because Doomguard then went from damaged 7/8 to undamaged 5/7. Second Execute could not be used and the dream of a comeback was lost.

The last game symbolized Team Celestial’s performance in ATLC. It was one of those games when you cannot help feeling bad for the player that is losing. SilentStorm’s opening hand was terrible. He had Zombie Chow and three cards that cost six mana. He was so desperate he ended up casting Power Word Shield on opponent’s minions for a card draw. After Zombie Chow, his first effective play was on turn 5.

Team Celestial is eliminated from further competition. Next week they are playing for their pride against Team Archon. As for FOSENBOYS, they secured a place in the Redemption Series.

Team Archon and Cloud9 came into this matchup with the same score (3-2).

Kolento started aggressive with two early Frothing Berserkers and dropped Mage’s health to 12 by turn 5. It was a decisive victory for Kolento, who had 46 hp at the end of the game.

The only chance Priest has in this matchup is to start aggressive and finish as fast as possible, hoping that Mage draws poorly. That did not happen. Firebat piloted Freeze Mage perfectly bringing first victory to his team.

Antique Healbot saved Xixo when he was on 1 hp and allowed him to burst his opponent down on the following turn. Xixo played really well around Hunter’s secrets, guessing that Ek0p plays both Freezing and Explosive trap.

I do not know how Firebat lost because the stream went down just before the final play. He was low on health and dead next turn, but he had a way to summon Mal’Ganis from Voidcaller. Some people said on Twitch chat that he attacked with Voidcaller into Freezing Trap, which is strange because he could check for freezing with imps he had on the board. Also Xixo could have told him that Ek0p runs both Freezing and Explosive traps. Was it the lack of communication, misplay, or he decided that he cannot afford to check which secret it is?

This was one of the most exciting games in the series. StrifeCro was under huge pressure from the start. On turn 5, Firebat locked Mage from playing spells with Loatheb, then popped Ice Block on the following turn. He countered StrifeCro’s Doomsayer/Freeze clears with Voidcallers and Nerubian Eggs, maintaining the pressure but not being able to finish the game. StrifeCro pulled through using secrets and heals.

After a mulligan when Noxious saw two Zombie Chows in StrifeCro’s hand, he said: ”StrifeCro won.”. However, after double Zombie Chow on turn 1, StrifeCro used hero power on turn 2 and 3. That gave Xixo time to clear zombies, with one of two Powermaces he had in his starting hand. On turn 4 he had 6/7 Mechanical Yeti and pressure started. After a couple of turns, when buff from the second Powermace landed on Weeeee all seemed lost for StrifeCro, but then, in spirit the of true Hearthstone esport moment, he topdecked Equality and Xixo’s board was Consecrated to oblivion. Xixo’s hand was empty, he did not topdeck 4 damage he needed for kill. StrifeCro healed himself to safety with Lay on Hands and few turns later won the game.

Kolento was able to draw removal tools and shut down Shaman on turn 3 with Auchenai Soulpriest, Circle of Healing board clear.

Cloud9 moved up to 2nd place, while Team Archon dropped down to 5th. Archon needs a victory next week if they want to secure direct advancement to second phase.

Nihilum is the best performing team in ATLC so far. They seem to have their line-up figured out. Lifecoach is playing Grim Patron Warrior and Handlock, which he likes to modify a little every week to keep opponents guessing what tech cards he will choose this time. Thijs confirmed his reputation of Druid specialist, locking this deck in every week so far. RDU had a more difficult time than his teammates. However, that could be attributed to the fact that he is usually playing 5th and 6th slot decks like Paladin and Shaman. There was a change in Nihilum roster this week: Lothar substituted Lifecoach.

After a rough start and two loses in the beginning of the League, Tempo Storm won three matches in a row, sweeping Team Celestial 6-1 last week. Hyped from Tempo Storm is having an outstanding performance in ATCL. He is competing with Kibler and Chakki for the Master of Duels title and $5000, which will be given for the best individual performance in ATLC.

Due to the fact that the benching rule does not have a huge impact in the beginning of the series, Thijs queued up again. Tactic worked, as he faced Zoo Warlock who was helpless against all board control tools Mage has at his disposal.

Turn 1 Piloted Shredder and Annoy-o-Tron that popped from it totally shut down Paladin’s early aggression. Eloise dealt only 6 damage by turn 5.

It was hilarious to watch Lothar imitating Lifecoach and roping turn 1, just to play Flame Imp after 70 seconds of “thinking”. Maybe there is something in using all the time every turn, considering result.

Annoy-o-Tron gave Hyped enough time to develop a board and drop down Warrior’s health. Turn 8 Archmage Antonidas with stealth sealed the deal.

Nihilum made a mistake sending RDU again after loss. He got benched after losing second game in a row. Nihilum’s best two decks were locked until their worst deck, Aggro Paladin, wins a game.

Tempo Storm took over 1st place. If Nihilum played around benching rule and won two more games, they would be sharing 1st place.

With a victory in this match, Value Town is staying in the battle for one of first two places and direct advancement in Live Finale. Team Liquid is looking for a way to avoid Redemption Series.

Savjz was not lucky when he drew 5 spells in a row.

Dog was hitting everything that needs to be hit by Arcane Shots and Flamewaker procs. It was a complete stomp.

Last week Neirea played Echo Mage with Molten and Mountain Giants, and had a bad time. He lost both games when Tempo Storm swept his team 6-1. Now he brought Freeze Mage but he put one Duplicate in it. When Trump triggered Duplicate on Bloodmage Thalnos, he was sure Neirea is playing Echo Mage. He did not attack in fear of Molten Giants and made few other misplays, like not playing Loatheb to protect his board from Blizzard on turn 6, but playing it before opponent’s turn 8, when Frost Nova or one of the secrets can be played. Although Trump played badly, he won.

Savanna Highmane was sapped twice. That huge tempo swing was just barely enough for Dog to win. Sjow was 1 damage of lethal and would have won, if he played Piloted Shredder and hero power instead of Savanna Highmane on turn 7.

Sjow showed the full strength of Grim Patron Warrior when he dealt insane 50 damage from the hand.

Even after week 6, nothing is decided yet. All we know for sure is that Team Celestial is going to be eliminated. Four teams will be battling for 1st and 2nd place next week. Winners of the following matches will advance directly to Live Finale:

These matchups will decide who will play in Redemption Series: