Mage decks often come in two forms: tempo-based burn strategies or late game combo-control decks. The latest addition to Kobolds and Catacombs may find a home in both.

Elemental Mage never really took off after Knights of the Frozen Throne despite what Frost Lich Jaina had to offer. The new expansion looks to reinforce this archetype with Ruby Spellstone revealed earlier in the week, and Arcane Artificer revealed below. 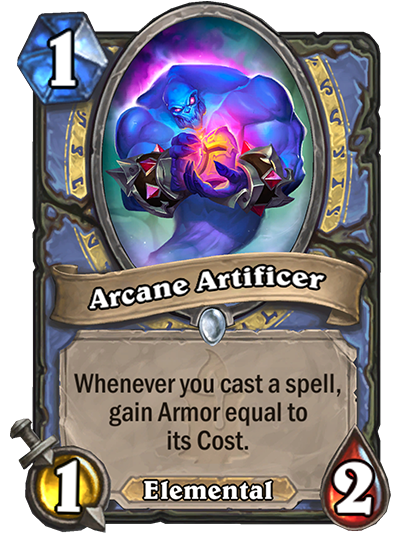 Armor gain is in relatively short supply in the Mage class. Ice Barrier is the most popular producer and has become somewhat of a staple in Alexstraza strategies. Artificer takes advantage of Mage’s dense spell selection and provides additional benefit to the class’ card advantage and burn spells.

Besides Mage’s spells, Artificer’s clearest synergy lies with Ruby Spellstone. The elemental costs only one mana, providing another cheap way to upgrade your spellstone for even more card advantage.

If Burn Mage is back, Arcane Artificer becomes a trump card in the mirror. Burning your opponent while gaining armor absorbs your opponent’s burn spells while all but nullifying Alexstraza’s ability.

Arcane Artificer could be one to look out for in the upcoming meta.