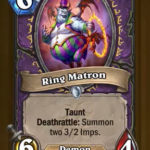 Ring Matron is a potential curve topper for an aggressive Zoo deck. It has a pile of stats that are aggressively bundled on both the original body and the two Imps that spawn afterward.

Midway Maniac isn’t aggressive, but it serves as another early drop for Zoo decks that can protect your other minions due to its high Health and Taunt.

Man’ari Mosher can give your weaker Demons a way to trade against stronger minions or can act as a last-minute lethal push with three damage. The Lifesteal also gives you a chance to recuperate any life you’ve lost since you often spend health to accrue an early advantage as Zoo Warlock.

Free Admission is a card that pushes Zoo Warlocks toward a Demon-style variant. Being able to get a four mana discount on Demons, if your draw hits both Demons, can allow for some interesting tempo plays.