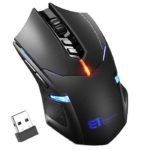 You’ll need a powerful gaming PC to run the latest games at smooth frame rates. But without top-of-the-line peripherals as a supporting cast, you won’t be able to capitalize on the advantage that your PC will give you.

The best gaming mouse in the market will reduce the time it takes for your actions to get picked up by the game of your choice with their low response time. They also feature better ergonomics than the over-the-counter mouse options, making them more comfortable to use for extended periods.

Though you won’t hear anything distracting from a gaming mouse while playing games, the same may not apply to everyone that you share your house with. Gamers that enjoy the comfort of the night may have dealt with roommates or family members that couldn’t fall asleep due to their intensive mouse clicks. You can soundproof your room to get over this issue, but getting yourself a silent gaming mouse on par with the regular ones will always be cheaper than the first option.

Most silent gaming mice have a significantly lower clicking sound than the common ones. Still, the most reputable names in the industry like Razer and Logitech have yet to build a “completely” silent gaming mouse. Top brands have models that produce less noise, but you’ll need to check out brands that you haven’t heard before if you’re after a genuinely silent experience.

We’ll go over both scenarios in our list featuring the best silent gaming mouse, which should help you narrow down your options and get busy gaming without distracting anyone as soon as possible. 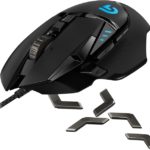 Logitech G502 series offers an all-in-one experience. The G502 line has the ergonomics, weight adjustment, excellent sensors, and the looks.

Logitech G502 Proteus Spectrum is the most silent member of the G502 family. Though the clicking sound is noticeably lower than other G502 models, it’s still 100-percent silent, so don’t try to mash the buttons too hard.

The G502 Proteus Spectrum’s PMW3366 sensor can go up to 12,000 DPI and has a response rate of one millisecond. The mouse itself weighs 0.26 pounds (121 gram), and you can increase it with the additional weights that you’ll find inside its box. Its tracking speed of 400 IPS makes it an overall solid choice for competitive gaming, and the 11 fully programmable buttons allow gamers to free up their keyboard in terms of hotkeys. 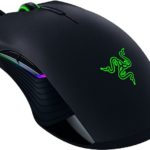 Unlike most recent Razer products, the Lancehead Tournament Edition features a more subtle look. It features a simple design and only focuses on delivering high-end performance.

The Lancehead features Razer’s 5G optical sensor that can poll up to 16,000 DPI. A tracking rate of 450 IPS accompanies its DPI capability, and the mouse takes advantage of Razer’s mechanical mouse switches. Though most mechanical switches tend to be loud both in keyboards and gaming mouse, Lancehead is one of the quietest mice that Razer’s produced. It’s still not completely silent, however, but it doesn’t get any better than the Lancehead if you’d like a quiet Razer mouse.

The mouse weighs 0.23 pounds (104 grams) without its cable and has a one-millisecond response time. There are nine independently programmable buttons scattered around the mouse, and you can save any macros or mouse profile to Razer’s cloud. 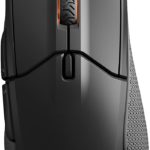 It’s hard to think about the sound a mouse makes while focusing on bringing the most competitive advantage possible, but the Rival 310 still features one of the more pleasant click sounds while keeping everything esports grade.

SteelSeries Rival 310 features the brand’s TrueMove3 sensor, which it describes as “world’s first true esports sensor.” The sensor can go up to 12,000 in terms of DPI and has a tracking rate of 350 IPS. Combined with a one-millisecond response time, Rival 310 checks all the boxes and is a solid buy if you’re a competitive gamer.

The mouse comes with eight programmable buttons, and it weighs 0.19 pounds (88.3 gram), making it almost 20-percent lighter than the first two options on our list.

Its clicking sound is on par with G502 if not lower. Hardly pressing down the keys will still cause more noise to come out, but the overall sound level is definitely on the quieter side, considering it’s a fully equipped gaming mouse. 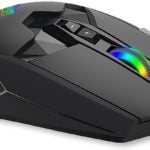 Though the first three picks of our list feature the most silent high-end gaming mouse, they can still be too loud for some gamers.

MOJO Pro Performance thoroughly deserves the silent in its name with its quiet clicks. Don’t expect a zero sound level of silence, however; you’ll still hear clicks that could be considered hoarse. It’s nearly impossible to hear this mouse’s clicks from another room, and the mouse features a PMW3336 sensor that can poll up to 12,000 DPI. The mouse weighs 0.28 pounds (127 grams) and a response rate of one millisecond. It falls a bit behind its competition with its 125-IPS tracking rate, but that’s just a small sacrifice to make for a silent gaming experience.

There are four dedicated macro keys on the left side of the mouse, and all the buttons you’ll see on it is fully programmable via its software. A sniper button is also present, making sure that you don’t miss any crucial shots when it counts. 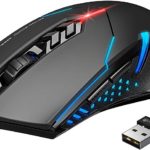 Unfortunately, the most silent gaming mouse options don’t feature the same top-of-the-line specs with the high-end options. They cost a lot cheaper in return, however, and feature the same ergonomic characteristics.

VicTsing’s wireless gaming mouse resembles Logitech’s G305 or Razer’s Lancehead in terms of shape, and it features one of the quieter click sounds compared to its competition. It features an optical sensor that can poll up to 2,400 DPI. Its main drawback is that it runs on AA batteries, but the wireless mouse can turn itself off after eight minutes of idle time to save energy.

We recommend investing in a pair of rechargeable batteries if you decide to buy this mouse, so you can eliminate waste and avoid going out to the stores every time your mouse runs out of juice. 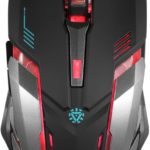 VEGCOO’s C8 silent gaming mouse is an excellent alternative for anyone that finds VicTsing’s alternative a bit too small for their hands. The C8’s left and right mouse button switches are as silent as they can get, but the macro buttons on its left side can be considered a bit loud compared to the left/right switches.

The C8 uses an optic sensor that caps at 2,400 DPI and features a rechargeable 400 mAh lithium battery. VEGCOO advertises a battery life of 30 days once the battery is fully charged, but your results may vary depending on the mouse features you have on or off.

There are a total of seven buttons on the mouse, and its ergonomics resembles Logitech’s G502. The mouse weighs 0.22 pounds (101 grams), making it one of the lighter wireless/silent gaming mouse options on our list. 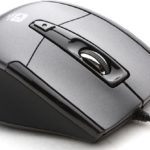 The Noiseless USB optical gaming mouse is potentially the most silent alternative on our list. The mouse’s left and right clicks give a sound feedback around 30 decibels, and it features excellent ergonomics for claw grip users.

Palm grip enthusiasts with large hands should beware since they may find this mouse a bit uncomfortable due to its size. The mouse’s optical sensor can poll up to 1,600 DPI, and it weighs 0.20 pounds (90.71 grams). The extra buttons around the thumb area don’t feature the same silent switches on the left and right-click buttons, which may make some gamers think twice before assigning hotkeys to their mouse.