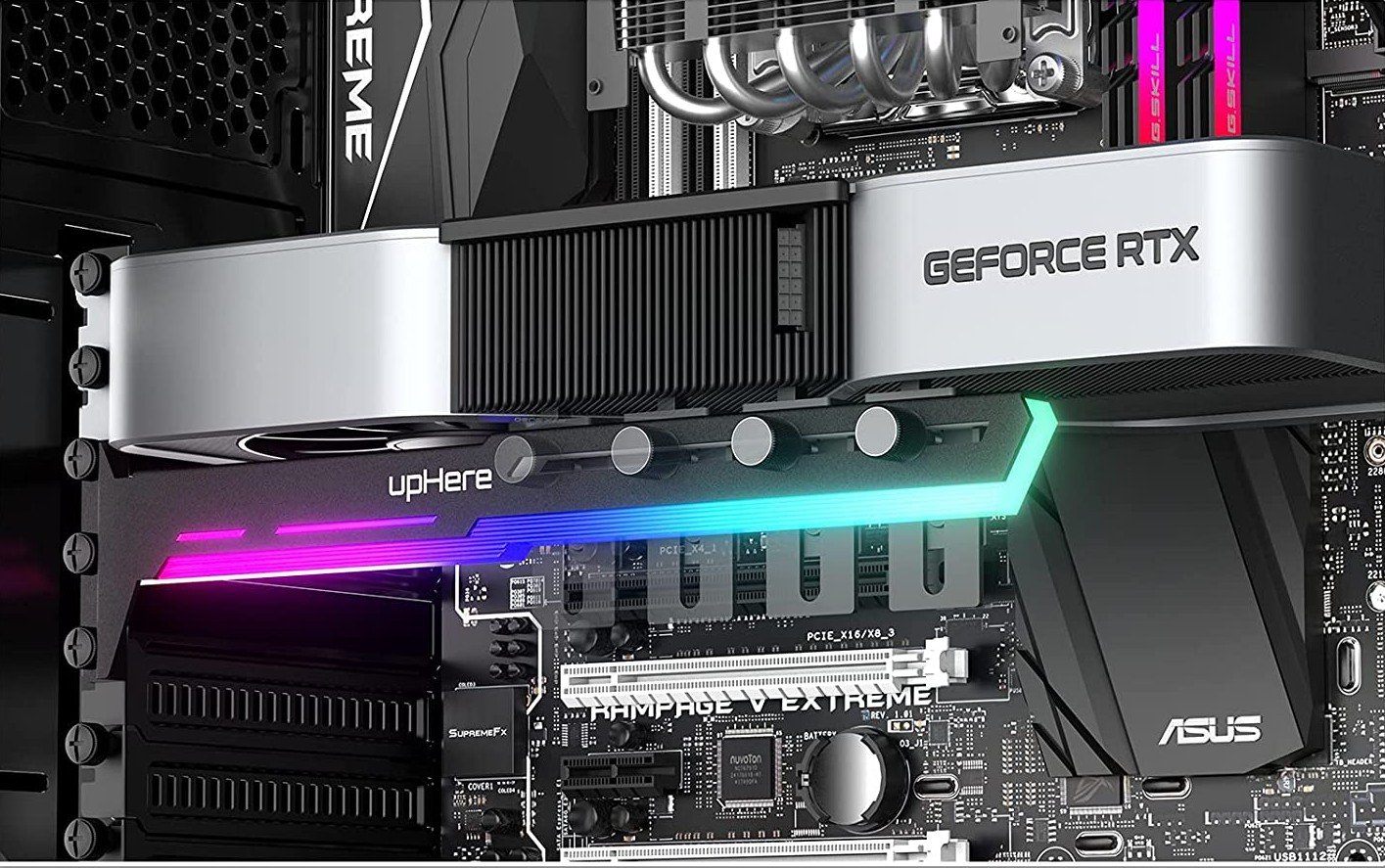 Image by upHere via Amazon

Graphics processing units (GPUs) are getting larger and heavier as technology improves. Despite their bulky size, most GPUs’ only point of contact with the motherboard is the PCIe slot. Since there’s only a small part of the GPU supported by the PCIe slot, the weight of the card can cause it to bend downward.

What is GPU sag?

GPU sag is a common problem, but not all cases are severe. Sometimes the GPU has a slight sag that’s unlikely to cause damage because its connectors and the slot on the motherboard are strong enough to handle the stress. An extreme sag can cause damage to the GPU and motherboard. If the GPU sags far enough, it can damage the PCIe slot, especially if the weight is too much for the soldered joints to handle. The sag might also damage the connectors on the GPU due to the constant pressure.

How to fix GPU sag

Minor cases of GPU sag don’t require fixing, but in severe cases, the graphics card will require additional support. There are many ways to fix GPU sag, ranging from professional products to home remedies. Some are more effective than others, so use what works best for you.

One of the easiest ways to fix GPU sag is by using the PCIe or power cable to support it. This method involves running the cables from above the GPU and ensuring there’s very little slack. When the cables plug into the GPU, they act as a support to keep the card from sagging.

Some cases have flexible mounting options and allow the GPU to be mounted in an upright position instead of lying flat. Alternatively, there are third-party vertical GPU brackets available that can hold the GPU upright. When the GPU is mounted vertically, its center of gravity changes, and its weight is better supported.

GPU sag is such a common problem that companies make support braces to fix it. These braces come in different forms, but their purpose is the same. Some braces screw onto the case under the GPU and act as a shelf for it to rest on. Other GPU braces look like a pole with support arms on them. The pole sits on the base of the PC case, and the adjustable arms sit under the GPU for added support.

How to install a GPU brace

Installing a GPU brace is simple, and it’s one of the most effective ways of fixing the sagging issue.

This installation guide works with braces like the upHere G276ARGB and EZDIY-FAB, but it doesn’t work with stand-based braces like the JEYI iBrace-8 or the CoolerMaster MasterAccessory ARGB GPU Support Bracket.

Installing a stand-based brace is a simpler process because they don’t need screws or available slots on the case. After opening the side panel, place the brace on the floor of the case, and adjust the support arms up to the GPU to give it support.

Using string or fishing line to support the GPU is an easy way to prevent it from sagging, but it doesn’t look as professional as the options mentioned so far. This simple DIY method involves tying one end of the string onto the GPU and tying the other end to the top of the PC case. The string should be tight enough to prevent the GPU from sagging.

If users find themselves in a bind, they can use some everyday household items to support the GPU. Some common objects used to prop up GPUs include pens and chopsticks. Legos are also a popular home remedy because users can add or remove blocks to adjust the length of the support.

These solutions are not the best, but they might stop the sag until a more permanent solution can be found. Use caution when attempting to fix GPU sag with home remedies.

GPU sag is a common problem caused by the weight of a graphics card, and it usually doesn’t affect the PC. In severe cases, the sag can damage the GPU, motherboard, or both. Regardless of how much the GPU sags, there are professional and emergency DIY options to fix it.