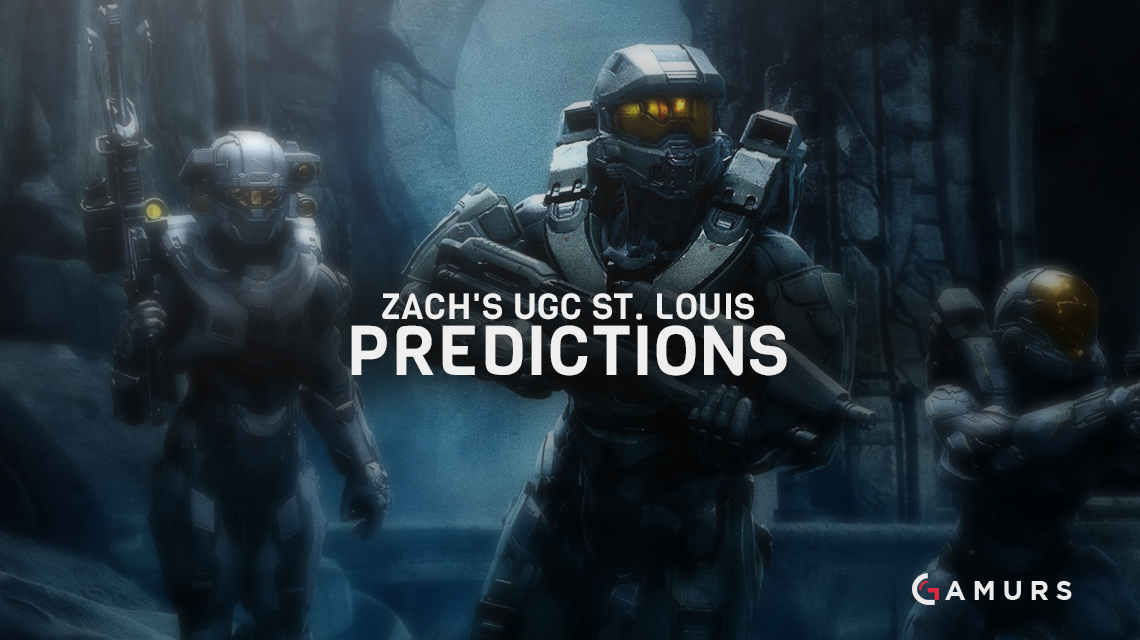 UGC St. Louis will be the first qualification LAN for the 2017 Halo World Championship. As many from all over the country come over to reunite with some of their closest Halo pals, this event holds a more momentous value for the pro teams. Being the first qualification LAN for HWC 2017, pro teams yearn to get an early qualification now to avoid having to compete for a spot at Vegas, or even worse, having to deal with the tremendously competitive and at many times heart-wrenching experience that comes with online qualifiers.

Although this would be far from the last chance for these teams to earn an HWC spot, this first LAN will have a great impact on every team competing. In this article, I will be predicting my top-eight placements for UGC St. Louis. For the sake of this article, my predictions will be based off of my personal knowledge of each team and players, data gathered by Halo Data Hive and my experience watching the streamed scrims I was able to watch.

Winning the HCS Pro League 2016 Fall Finals in an upsetting fashion for OpTic fans, nV looks to build on this great success by defeating the green giant once again in St. Louis. Having more than enough time to reevaluate their positives and negatives from the fall finals, I believe that we will see an nV roster that will only prove to be even more fierce than last season. Winning nine out of their 10 scrims, and only tying a short series to Inconceivable 3-3, nV has not lost a single scrim online, even defeating OpTic 8-5 in their one scrim. Although both seemed to match very well from a slaying perspective, nV was able to come out on top in those one kill, slayer game-winning scenarios, which helped nV win Truth Slayer and Regret Slayer.

This ability to clutch up in game-winning scenarios will prove to be a very crucial asset to any team when facing neck-to-neck competition. Although I can’t necessarily say that nV is more clutch than OpTic, I do feel that based off of my experience watching both teams succeed, nV tends to feel more comfortable when their backs are against the wall compared to OpTic, which proved to bite OpTic in the rear in the fall finals when nV came storming out of the losers bracket to defeat OpTic in not one, but two series.

Based on my evaluation of OpTic’s development over last season, I personally feel that their lineup is unstoppable when they gain momentum. However, when their momentum is stalled by an equally talented team, OpTic has a difficult time adapting to the scenario. If they are able to adjust this by St. Louis, then OpTic could definitely win the entire thing, but as of now, that has yet to be proven, especially after their recent loss in a scrim to nV, who at the moment is looking very impressive compared to OpTic. The Green Wall has had a slightly more difficult time in scrims, winning nine out of their 11 scrims, but they should still be able to find success in St. Louis.

Possessing a furious combination of both talent and teamwork that may potentially be compared to the likes of nV and OpTic, I believe that ALG will be prepared to compete with almost every team they may face. ALG has recently dominated Luminosity and defeated both Evil Geniuses and Str8 Rippin in scrims. Allegiance is more than capable of being a top-three contender at this event. However, I can only see ALG getting third based on their difficulties in scrims against OpTic and nV. Allegiance certainly looks like a team poised to be one of the greats, but they aren’t there just yet.

Appearing to be an extremely competitive squad online, Liquid is most certainly capable of taking a fourth place finish at this event. Featuring four of the most individually-talented players in the scene, that just so happen to work extremely well as a unit, Liquid doesn’t have many of the same objective difficulties that you tend to see from slay-heavy lineups, unless they are put up against an nV or OpTic, which you will then see them collapse in some objective modes. This may change over time as Liquid matures as a team, but as of now, I believe that this will ultimately be their one downfall in St. Louis.

Having very close scrims against the teams they played, including a scrim against OpTic, Str8 Rippin looks like they are capable of getting a solid fifth place finish. Str8 features what I believe to be one of the greatest combinations of old talent and new talent, with young star Renegade being on board. Str8 has all of the assets that come with having experienced players, while also maintaining their sharpness with the young star, who appears to be molding very well with this team.

Being the breakout team to come out on top in the Millennial Esports Placement Cup, Inconceivable looks to prove their worth in St. Louis. I recently wrote about how this team is capable of being a great lineup and their promising success in scrims is a testament to that. However, with this lineup featuring such young players with no commanding leader, I fear this team may crumble when it matters most, due to the lack of experience. Their lack of experience will make this team vulnerable to making rookie mistakes, and without a vocal leader to guide them back to place, Inconceivable may never be able to recover.

Having a relatively rough time in scrims, LG may have a very difficult time getting off to a strong start this weekend. With a roster that I believe will be ran primarily off of momentum, and considering that their scrims haven’t been as impressive as they may have wanted them to be, LG won’t have a lot to get hyped over, unless they can win their first few games and build off of that. I do, however, feel that they are capable of receiving a seventh place finish.

Only winning one out of their past nine scrims, EG has not been receiving the results they were hoping to get with their newly-adjusted roster. The new EG roster seems to be struggling lately, which is not what you want when attempting to compete for a HWC spot. Unfortunately for this team, there aren’t many positives to say right now, other than me hoping that they can figure something out fast and earn a top-eight finish in St. Louis.

Do you agree with my UGC St. Louis predictions? Let me know in the comments section below or by tweeting us @GAMURScom.