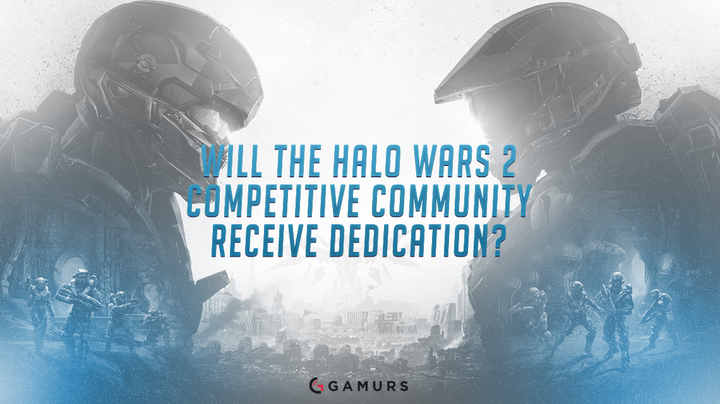 Ever since 343 started to show serious dedication to thecompetitive Halo community back in Halo 2: Anniversary, the competitive community has started to growat a very fast rate. Many of the top organizations have viewed thisspark in community growth as a great opportunity to invest in Haloby signing long term teams to make their mark in the scene. With somany opportunities popping up for Halo ever since 343 started to show more dedication, I canonly wonder if 343 will do the same for Halo Wars 2.

Halo Wars is one of those games that almosteveryone in the community knows about. It was a real time strategygame that combined the Halo theme with similar mechanics you wouldsee from Starcraft to make Halo’s first ever strategy game.Considering its lowered expectations, Halo Wars proved to be a great success for the community.Most people enjoyed the game and, for the most part, we wanted tosee a series of HaloWars games.

Although Halo Wars is in its own realm compared to other Halotitles, it showed us that Halo as we know it could work in a realtime strategy platform. In fact, this is what Halo was originallydesigned to be until Microsoft forced Bungie to change their plans to make Halo a FirstPerson Shooter for the Xbox back in 2001 making Halo: Combat Evolved. Although it was wise for Microsoft to force Bungie to do this, considering how Halo would have tocompete with eSports giant Starcraft back in 2001 while the FPS scene at that timewas looking for the next big title, many wondered what a Real TimeStrategy version of Halo would have felt like.

Compared to the PlayStation 4, the Xbox One is starting to make a much more serious impacton the esports scene. With several more titles to work withcompetitively as exclusive games such as Halo 5, Gears of War 4 and potentially Overwatch, if Xbox providesthem with an exclusive contract like they did with Call of Duty afew years ago, we should not be surprised if 343 develops an interest in showing dedication tothe competitive scene once Halo Wars 2 comes out. One of my biggest theories forwhy EnsembleStudios, the developerof HaloWars, andBungie never showed much dedication to thecompetitive HaloWars scene back in itslaunch in 2009 was that Starcraft was still an esports giant,arguably being the most popular esport at that time. Competingagainst them when HaloWars was much morelimited since it was on a console instead of the PC would not havebeen a smart move, but now that the Starcraft community is a lotquieter than before, this may be the opportunity 343 needs to truly launch this series.

At the end of the day, this isall speculation and nothing has been confirmed but the reality isthat HaloWars for the most partwas a very successful game. Bungie’s lack of dedication for the game throughout itslifetime seemed very strange at first, but in my opinion, the gamewas released at the wrong time if Ensemble and Bungie wanted to do something serious with thisseries. Now I think 343 views this time as a great opportunity totake their momentum built from Halo 5’s success and really spark the Halo Wars community once again to solidify it as a topgame for Xbox. I would not be surprised if we were to see somemajor tournaments going on for the game, at least in its firstyear.

What do you think aboutthe Halo Wars2 competitive communityreceiving dedication? Let me know in the comments sectionbelow.

Credited images got to HaloWaypoint, Starcraft Wikia and Ensemble Studios