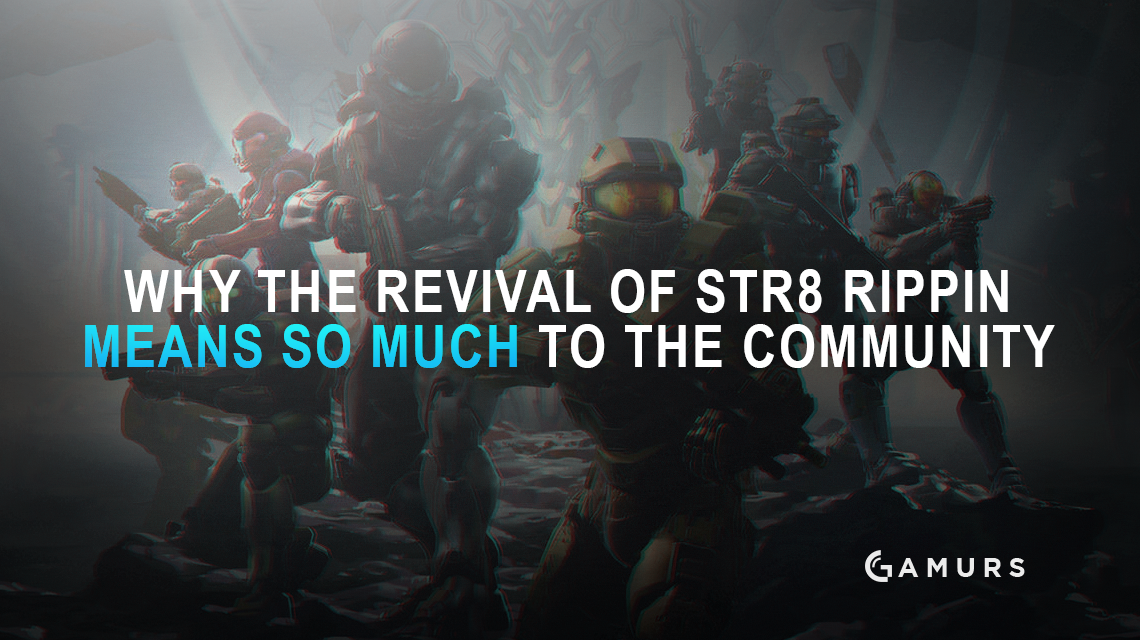 Rewind back to MLG Toronto 2008. After the heartbreaking departure of Mason “Neighbor” Cobb, who hoped to find a brighter future with Final Boss, Tom “Tsquared” Taylor, Brian “Legit” Rizzo and Kyle “Elamite Warrior” Elam put their faith in the hands of a young star by the name of Eric “Snip3down” Wrona. A player with astounding abilities would now have an opportunity to solidify himself as one of the top Halo Players in the world. His resume may not have been lengthy, but under the guidance of the veteran himself, Tsquared, Snipedown was able to shine at MLG Toronto, proving to everyone that he was a big time player ready to make his mark on the community.

With their backs against the wall, Str8 Rippin was able to win MLG Toronto 2008. This win may not have been the most prestigious win under the Str8 Rippin name, but as a fan, it showed me this team’s ability to adapt and move on from the extremely significant player that was Neighbor. It also, in many ways, was the showcase event for Snip3down, who previously was on a team named Triggers Down, which he won an event with prior to joining Str8 Rippin, showing everybody that he didn’t need the Triggers Down team to be great. These two factors combined made MLG Toronto 2008 one of the most memorable events for me, not only as a Halo fan, but as a Str8 Rippin fan.

With the recent announcement of the resurrection of Str8 Rippin, many have quickly jumped to show their support for the legendary team, as Tsquared looks to take a bit more of a professional approach to the team and convert it into a professional organization. As the owner and legendary captain of the team, T2 has seen this community evolve ever since the beginning years of competitive Halo. He has seen this community at its best and at its worst, and in the ever growing esports market in 2016, he believes that now is the opportunity to take advantage of the recent hype Halo has built and turn Str8 Rippin into a prestigious organization that will hopefully be recognized as one of the founding fathers to help raise the popularity of the scene with their success as an organization.

In my earlier time on eSports Guru, I stressed the importance of teams forming within our Halo scene and growing with the help of our community in some articles. I always welcome new organizations to take their shot at the championship, but there will never be an organization more respected in this scene than a successful organization that was founded within Halo. Being a respected Halo fanatic who takes their shot with an organization, fans will almost automatically develop a connection with you as they see you as one of their own. They understand your passion and your added expertise just adds further reason to put trust in you. This is exactly what’s going on with Tsquared and Str8 Rippin at the moment.

Looking at a team like Team Allegiance, they have no prestigious winnings other than their victory at the HCS Pro League Summer Qualifier of 2016 and they are currently in last place in the North American Pro League standings. Yet so many fans continue to cheer them on and even organizations, such as Money Matches, show their support. I believe that this is primarily due to Allegiance being an organization that was founded off of Halo.

Although they have expanded to other games, Allegiance took the challenge of starting their path of success within Halo, which at the time and even today is a very risky investment considering the evolution in competition and temptations that come from other popular esports. Esport organizations very rarely launch directly off of Halo, but Allegiance did just that and they have managed to become successful from it.

Although Str8 Rippin is in a much better position than Allegiance on a competitive standpoint, with Str8 Rippin clinching a fourth place finish in the season, sending them to the finals, while Allegiance will be fighting for their lives in relegation with an eighth place finish, the same concept that fans will support organizations formed directly within the scene itself still applies with Str8 Rippin. Ever since the recent announcement of the revival of Str8 Rippin that doesn’t even date back to a full two weeks yet, this organization has already hit 2000 Twitter followers, opened its own clothing store and built a strong, dedicated fan base that makes their presence known throughout all forms of social media.

Although these factors may seem like the very basic components for an organization to grow and prosper within the esports scene, these components are not easy to come by and require endless hours of tiresome work and dedication that will push your level of patience to its limits. Str8 Rippin’s ability to acquire all three of these components is a very strong sign that Tsquared and the entire Str8 Rippin organization is onto something truly special.

Every organization has to start out somewhere and the game they choose can have a drastic impact on the level of growth that organization receives in the future. Evil Geniuses started in Counter-Strike, Team Liquid started in Starcraft and OpTic Gaming started in Call of Duty. These three organizations were some of the top pioneers within their scene. Investing their time and money on these scenes, they were one of the biggest reasons why the games they initially invested in eventually grew to some of the biggest esports in the industry.

Although all three would eventually branch out to other games to continue growing and some, like EG, would completely depart from the game they initially invested in, the respect that they have built from their time working with these organizations will be everlasting. As I said earlier, fans and developers recognize and respect organizations that form within their game, especially when there are other games that may look more appealing on a viewership standpoint. Str8 Rippin is following in the footsteps of these three great organizations to get themselves in the position they are in today and the community is completely supporting it.

What do you think about the revival of Str8 Rippin? Let me know in the comments section below or tweet us @GAMURScom.