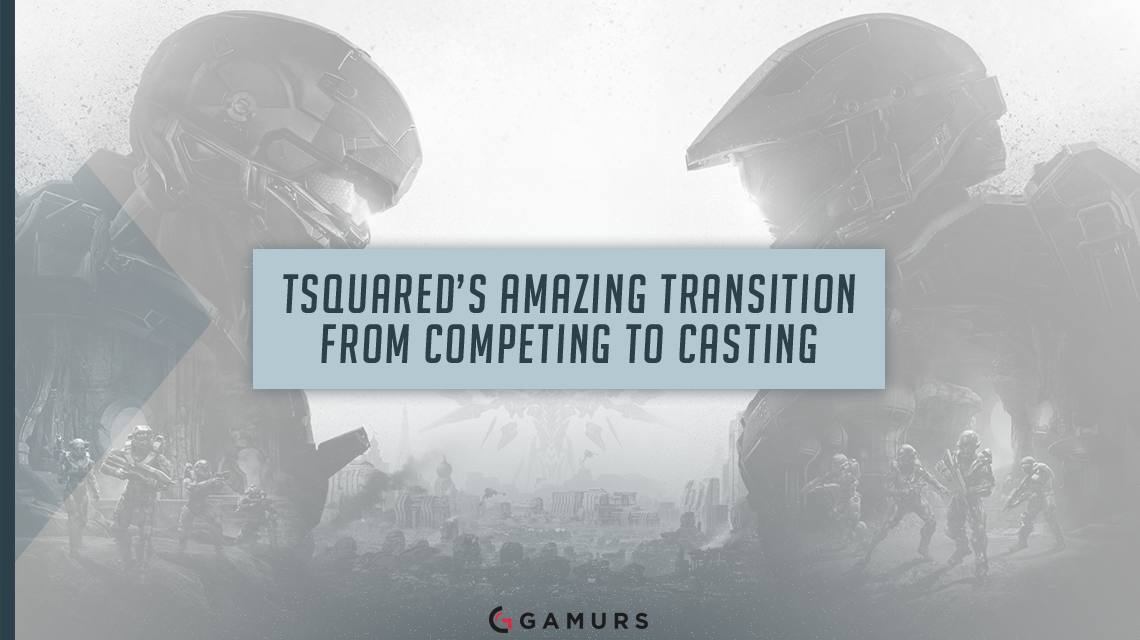 Once father time strikes, aveteran competitor and retirement slowly becomes the realityeveryone must face. However, opportunities tend to rise for many astheir relationships, experience and knowledge of the game continueto be useful. Tom“Tsquared”Taylor is a veteran player whoseyears of dedication to Halo has put him in a great position totransition from competing to casting.

The ten-time event winner hasworked very hard to build his reputation as a caster. Working withEsports Arena, he was a caster for their recent Halo 5 event, whichwas a smaller scale event that featured some of the top amateurcompetitors from California. Word about his great casting in theevent quickly got around and opportunities started to flow aroundfor Tsquared. He would soon start casting the Open Qualifiers,Legendary Cups and perfect his abilities.

Recently, he was offered anopportunity to cast alongside veteran player Kyle“Elamite” Elam for week six of the HCS ProLeague. He traveled all the way to Burbank, California to go thethe ESL Studios and gain some extremely valuable experience castingin a professional environment. During his time casting withElamite, many, including myself, were amazed by how comfortable hewas casting such important matches with thousands watching. EvenElamite was amazed with T2’s transition, with Elamiteconstantly agreeing with literally everything T2 said.

Tsquared has a very uniqueability not many other Halo casters have. Being a competitor withyears of experience, T2 is able to spot every big play that is madeand he makes sure to highlight every single one, explaining howeach play could be game changing. From something as big as a clutchsnipe, to something as small as a player’s movement around the map,T2 is able to spot it all and he always makes sure to breakdownevery situation.

This ability really came intofull effect when he was casting the HCS Open Circuit Legendary Cupwith Ryan “Towey” Towey in the Winner’s Bracketsemifinals match, which was Denial vs. 3sUP. T2 did a great jobhighlighting both Ian “Chaser” Contorelli and Abel“Rammy” Garcia’s individual plays. Whilemost casters could have easily missed Chaser’s great playssince his teammate Gilbert“Munoz” Muñoz was performingsignificantly better than him in the first half of CTF on Fathom,Tsquared quickly pointed out how both Chaser and his teammateEzekiel “Prototype” Martinez were slacking significantly inthe kills margin.

Instead of highlightingeverything that Munoz was doing, Tsquared was more interested inkeeping an eye on both Chaser and Prototype since he knew that ifeither of them stepped up their game, 3sUP could get the ballrolling. This turned into a great decision on Tsquared’s partsince Chaser would soon after significantly step up his game andmake some very big plays for his team and in the end he wouldperform much better then Munoz. This is an ability that I love andalthough former pros, and now casters, Michael“StrongSide” Cavanaugh, David“Walshey” Walsh, Kyle“Elamite” Elam and Ryan“Towey” Towey do this very well, not many othercasters can do this as good as they can.

In one of my past articles, Italked about how Tsquared’s best years of competing arebehind him and how it might be time to hang up the sticks and moveon to something else. Although I doubt that my opinion alone wasenough for him to move in, I am certainly glad that he was able tomake this transition from competing to casting. T2 is quicklyturning into one of my favorite casters of all-time and hopefully along and lucrative career in casting is ahead of him.

What do you think aboutTsquared’s transition from competing to casting? Let me knowin the comments section below.