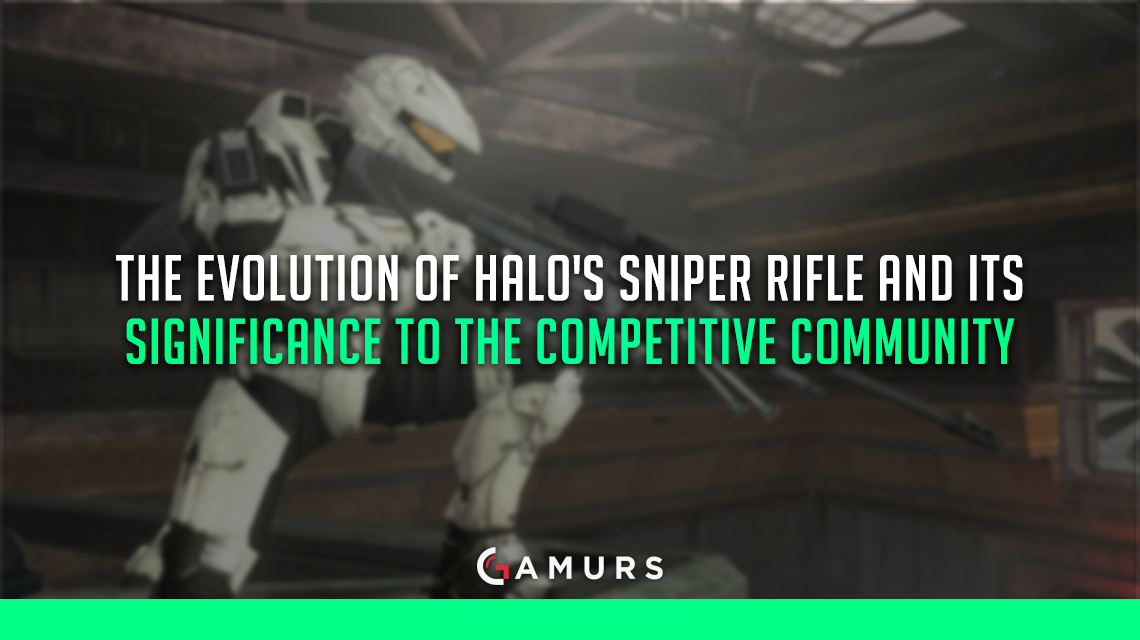 The sniper rifle is truly one of the most adored weapons in the history of Halo. So many of us praise it for its high difficulty of use and satisfying reward. For some odd, unexplainable reason, there is nothing more satisfying to so many Halo players than to run around the map, constantly hitting headshots with your sniper rifle. For many of us, this weapon is the real test of true marksmanship in Halo and some may even argue that your ability to use this weapon will determine whether or not you are destined to be a great player.

Halo’s sniper rifle has evolved over the years, but its significance on the battlefield has remained the same as one of the most dangerous weapons if put in the right hands.

During the time of Halo: CE, the sniper rifle was a weapon that threw off many players. With it being the first game in the Halo series and having a wide variety of close range, mid range and long range weapons to chose from, it took the community some time to truly understand just how powerful the sniper rifle could be. Although the mechanics during this time forced the game to play much slower than today’s Halo 5, with there being low aim assistance, no sprint, high gravity, extremely reduced health and sometimes even a death when falling off of platforms, the sniper could still have a large impact on the game if the player could put himself in a good position and maintain good accuracy.

Once Halo: CE came to an end and preparation for Halo 2 began, the sniper rifle became one of the most popular weapons in the community. Already receiving so much praise, many were interested to see what Bungie would do to improve the sniper come Halo 2. Bungie made using the sniper significantly easier than in CE by increasing the auto aim, lowering gravity, completely removing any health reducement due to falling and the addition of unexpected glitches. At first the community was very conflicted with these changes, but over time, many were able to take full advantage of the benefits that came with the new mechanics to hit sniper shots that would be nearly impossible to hit in CE. The faster pace that came with Halo 2 also allowed the sniper to have more of a fair ground to play on with its added tweaks.

“A Balance of Both”

Come Halo 3, there were two kinds of sniper fans Bungie would hope to satisfy with their new game. Those who remained loyal to the traditional Halo: CE sniper and those who enjoyed the changes that came with Halo 2. Bungie hoped that the new changes they made with the Halo 3 sniper would be enough to satisfy both sides by providing them with the best of both worlds. Bungie would keep many of the Halo 2 game mechanics such as low gravity, but they would slow down the firing rate of the sniper, sleightly raise the reticle after a shot, lower the aim assistance and get rid of all weapon glitches. This would allow the sniper to continue to be an efficient weapon in fast paced games, but require a high level of marksmanship to do so. From a competitive standpoint, this is the perfect balance and it allowed the sniper rifle to become a much more respected and praised weapon than it already was in previous games. Many, including myself, would argue that the Halo 3 sniper rifle was the sniper that launched the new competitive era of sniper driven players and players such as Eric “Snip3down” Wrona are a perfect example of how impactful the sniper rifle truly was back in Halo 3. Although CE and Halo 2 had amazing snipers, no game has been able to have a sniper balance as well as Halo 3 had.

Come Halo: Reach, many were once again getting prepared to see what Bungie had waiting for us in their last Halo video game. After nearly ten years of hard work and dedication to our community, Bungie wanted to leave with a bang and they did just that. With odd mechanics, new features and a fresh new feel to the game, the sniper rifle changed dramatically. For me, the best way to describe the Halo: Reach sniper rifle is by saying Halo: CE, 2 and 3’s sniper had a baby and it was a very unique looking baby. Sharing features from all three games such as the high gravity from CE, the increased aim assist in H2, the firing rate from H3 and its own new features that made it unique like any other baby. The Reach sniper was one of those weapons you either loved or hated just like the game itself.

Under new development from 343 Industries, there was a lot of hype around Halo 4 to see what 343 could do to revive a dying franchise that was nearly destroyed after all the chaos that came with Halo: Reach. 343 promised to provide fans with a great competitive experience and, as many of us know by this point, the sniper rifle needed to be a factor. When it came to the sniper, 343 made several adjustments to how it worked. Descoping was no longer a factor when someone would shoot at you and instead there was a massive recoil to your reticle and scope. Additionally, the added sprint, armor abilities, lower gravity and increased aim assist made the Halo 4 sniper arguably one of the easiest snipers in the franchise. Many argued that its ease of use caused the weapon to not be as exciting to use or see in action compared to previous snipers, therefore ruining their experience. The H4 sniper, just like the Reach sniper, was a weapon that stirred up a lot of controversy.

“The Beginning of Something New, and Possibly Great”

Halo 5 has been considered by many to be 343’s new approach on competitive Halo. A new style of play that many believe will help make our game look more appealing to others as years go by. A style that has discouraged veterans, but is proving to be an effective way to attract the attention of younger gamers who will soon be the face of our franchise. This forward thinking mindset is shown in all aspects of Halo 5 and the sniper is no exception. Due to several new additions to the game’s mechanics such as thruster, clamber and hovering provide a much more faster paced experience to the game. The sniper rifle has been heavily impacted by this. Although finding a good position to snipe at still remains as one of the key aspects every sniper needs to master, I would argue that rotating around the map to constantly find good positions is more important than ever with Halo 5 due to the fast paced action. The added slight decrease in aim assist and re-addition of descoping also adds a bit more of a challenge to sniping compared to Halo 4, which makes using the weapon much more satisfying to use compared to its previous game.

The sniper rifle has gone through many stages of evolution throughout its lifetime, but its main purpose has remained the same. To this day, the sniper is still one of the most powerful power weapons to use when put in the right hands and it still maintains its popularity amongst a vast majority of players both competitive and casual.

There is no doubt in my mind that the sniper has had a massive impact on our community. Its high demand has caused developers to take it into consideration in almost every mechanical change they make, making me unable to even imagine competitive Halo without a sniper on any map. It is truly one of the most fun weapons of all time.

What do you think about the evolution of the Halo sniper rifle? Let me know in the comments section below or tweet us @GAMURScom.