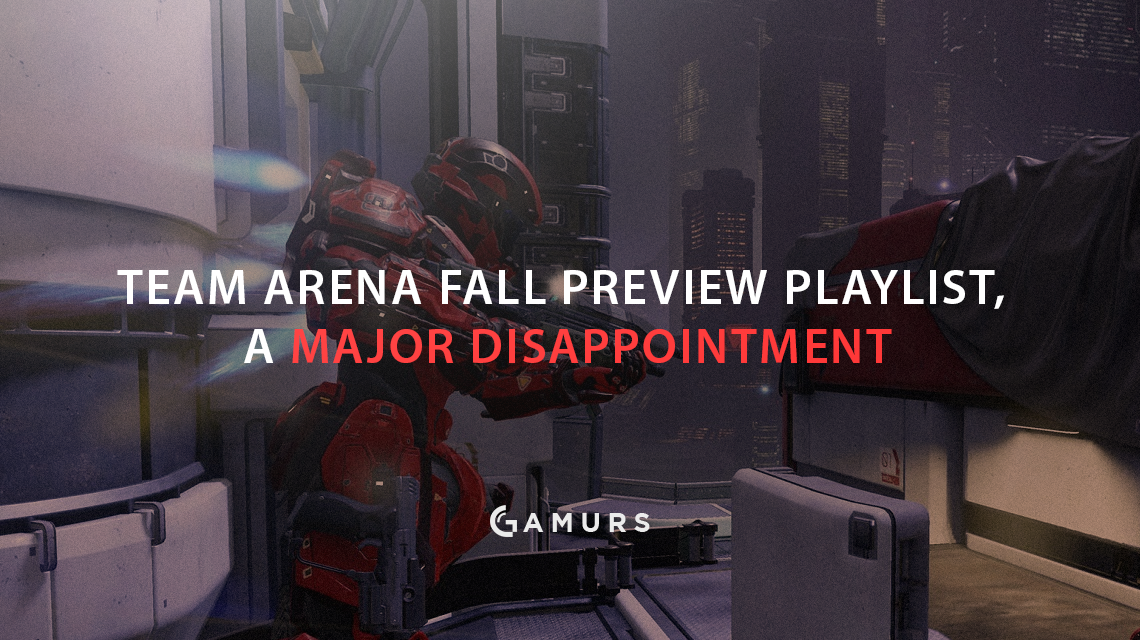 It has been a little over amonth since the Team Arena Fall Preview Playlist launched inHalo 5 and while most of us hoped that we would be able toadapt to the new changes 343 Industries made to many ofthe maps, this unfortunately has not been the case.

This temporary change to theTeam Arena playlist is designed to allow fans to give feedback onthe changes 343 made to the maps. All of these changeshave been designed to enhance our competitive Halo experience comeSeason 2, but many of these changes seem to have hurt the game.Silly decisions such as having camo and rockets available to pickup on Overgrowth are only the beginning of the problems we facewith this update. Other problems we face are bad spawns that haveyet to have been improved, cringeworthy, uncreative and unenjoyablemaps that continue to be shoved down our throats and gametypes thatsimply don’t work in Halo 5 but are still being tested forsome odd reason.

I am not a fan of creatingcontent that criticizes our developer. In fact, I am glad they tookthe time to change this playlist and show us new ideas that theyfelt would make the game better. The problem occurs when343 continues to give us what we don’t want, even after weas a community clearly state what we want to be changed and what wedon’t want to be changed. Of course there are some ideas that thisplaylist has brought to the table that may be conflicting to thecommunity. I am not saying we all share one mind, but there arecertain problems that the vast majority of clearly agree upon suchas the bad spawns on some maps, the questionable searching systemthat can force you to play against full teams while you’re playingalone, the random, underserved bans after you randomly lag out of agame and the fact that you randomly lag out in the first place whenHalo 5 is said to be on dedicated servers. While we areforced to play on maps most of us don’t even like that have weaponsand power ups that for the most part clearly don’t work with themap or gamemode, there are clear problems that never get addressedeven though almost every player has experienced them.

This is the kind of situationthat may discourage players from continuing to play Team Arena orHalo 5 as a whole. The fact that so many of our voicesaren’t being heard and we are forced to play maps and gamemodesthat for the most part are complete garbage compared to what wehave been used to for the past 11 months can make anybodydisappointed with 343. For the most part, this previewplaylist has been a complete waste of time, which is a shameconsidering the great potential this playlist had. 343 hadthe perfect amount of time to bring new, more creative ideas to thetable for us to give our feedback on, but instead they decided topretty much try the same maps we already rejected and try the samegame modes that have proven to not work in the past. During allthis time that they spent trying these same maps and gamemodes, whycouldn’t 343 invest their time into a better routesuch as creating an Extraction Gamemode and allowing us to test itout in the Preview Playlist? Maps aren’t our biggest problem at themoment, weapon and power up placements are fine for pretty muchevery map and the one thing so many of us have been wanting to comewith the next DLC is the Extraction Game mode from Halo4.

Of course this is just myopinion, but I am sure many of us can agree that this previewplaylist did very little to actually improve our competitiveexperience. There are still many problems that I have listed thathave yet to be resolved which could greatly hurt the lifespan ofthe game over time if they never get resolved.

What do you think about the TeamArena Summer Preview Playlist? Let me know in the comments sectionbelow, or on our Twitter – @GAMURScom.

Image credits go to 343Industries, Team Beyond and YouTube