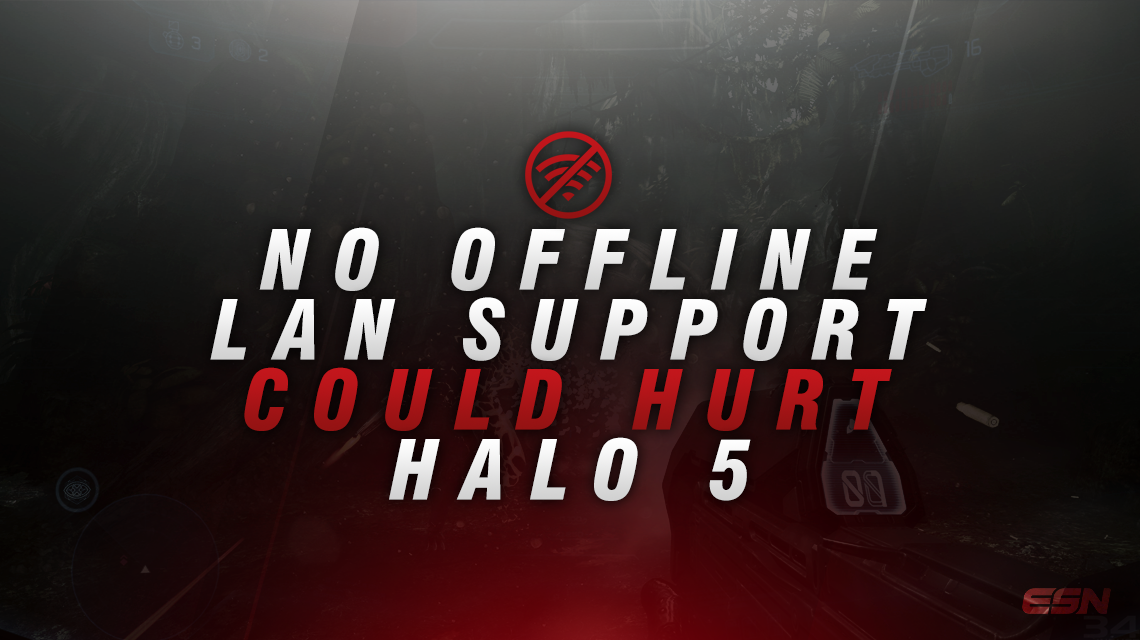 Halo 5: Guardians has a lot going for it when it comes to competitive play: a spectator mode, equal starts, an eSports focus and a developer-run eSports league (stewarded by competitive gaming juggernaut Electronic Sports League). For this reason, it’s extremely puzzling as to why the game lacks any real local area network (LAN) support, one of the most basic necessities for hosting an offline tournament.

The reason why I place emphasis on the word real is simple: contrary to what Microsoft Corporation and 343 Industries may claim, the game does not feature LAN support. This isn’t necessarily a new problem either since Halo: The Master Chief Collection also lacked offline LAN support. The Halo Championship Series (HCS) organizers attempted to manage in spite of this issue to varying success, with every event being plagued by connection issues and match restarts. In other words, it wasn’t a question of “if there would be connection issues” but a question of “when will there be connection issues.” All of these issues came to a head when Xbox Live went down during the HCS Season 2 Finals in July, which ultimately caused an hours-long delay on the event’s final day. Furthermore, this problem once again presented itself during the Gamescom Invitational when an internet outage at ESL Arena halted play for roughly 20 minutes. Now, you may be wondering why Xbox Live going down would cause issues at a LAN event, and therein lies the problem. Che Chou, the Franchise Media Director at 343, has said that, in order to LAN, the Xbox One’s need to be connected over the same Wi-Fi network and still need to ping to the Xbox Live servers. Although the connection doesn’t require any substantial bandwidth, the issue still remains since it means that the ability to actually host a LAN is dependent on factors that may very well be outside of one’s control – such as a potential Xbox Live outage. However, if one requires an Xbox Live connection in order to LAN, it raises the question: is it actually a LAN? Typically, in the context of competitive Halo, a local area network is simply the ability to play offline with multiple consoles, eliminating the hassle that comes with playing on split-screen. There are no hidden strings attached, and there is definitely not an internet requirement. It’s been a staple of the series since the very beginning, with every installment, up until Halo: The Master Chief Collection (including the often overlooked Halo Wars), supporting LAN/system-link. It was a feature that was so ingrained in the minds of competitive Halo players that it was simply expected, and, unlike splitscreen, it isn’t any more taxing on the console’s hardware than if one were playing singleplayer. Moreover, especially in the context of modern-day internet trolling, LAN support is more of a necessity than ever before. Little over a month ago, the world witnessed the largest eSports tournament in history, Dota 2’s The International 2015, come to a grinding halt. For three long hours, the weeklong gaming spectacle was delayed due to a distributed denial-of-service attack (DDoS). The root cause of the problem: Dota 2, like Halo 5: Guardians, lacks offline LAN support, meaning that they still needed to connect to Valve’s servers in order to play. And, unfortunately, the issue of DDoSing will only continue to get worse and worse as eSports continues to grow in its popularity and as Halo eSports continues to grow in popularity. Now, many have placed the blame squarely at the foot of Microsoft for this issue, claiming that they failed to design the Xbox One with offline LAN support in mind; however, that may not necessarily be the case. During the Electronic Entertainment Expo 2015, Gamespot conducted an interview with Rod Fergusson, the Studio Head for the Coalition (the Gears of War-equivalent to 343 Industries), and he said this: “System link kind of went away with this generation, but we just explained [to Microsoft] the importance of this to us. Competitive players want to be able to go to a hotel ballroom and have an event, and LAN support is an important part of that, so we just pushed on it and we got that exception [for Gears of War: Ultimate Edition].” If this is the case, then the lack of LAN support in Halo 5 isn’t due to a lack of functionality on the Xbox One. It’s due to a lack of trying on the part of 343 Industries, which seems to be contrary to their efforts of pitching Halo 5 as an eSport. Pyroteq’s Video: https://www.youtube.com/watch?v=i5B4TfLN09E Furthermore, the lack of LAN support, coupled with 343’s decision to abandon peer-to-peer networking, creates a very major problem for competitive players in places like Australia and New Zealand. Although this issue hasn’t been discussed as much as one might hope, Pyroteq – the founder of the Australian Cyber League – made a video on the subject that explains the issue in detail. Essentially, the issue mainly boils down to latency. If players are forced to connect to a server that may be tens of miles (if not hundreds of miles away) when they could otherwise very simply connect to one another through peer-to-peer networking, then the issue of latency presents itself. And, whenever latency is in the picture, lag won’t be too far behind. These circumstances could potentially create a situation where competitive Halo is simply not a possibility in places outside of North America and Europe, which by extensive hinders Halo’s growth. At the moment, it’s unclear if 343 will add LAN/system-link support into Halo 5: Guardians or Halo: The Master Chief Collection; however, doing so will easily strengthen each titles’ longevity and lifespan (since they won’t be invariably tied to Microsoft’s eventual shutting down of Xbox One servers in the distant future) and would bolster Halo’s competitive growth. What do you think about Halo 5’s lack of LAN support? Let us know in the comments below, and stay up-to-date with Halo eSports on Twitter: @eSportsNation and @ESNHalo. Also, if you’d like to see offline LAN implemented in the game, tweet at the powers that be.